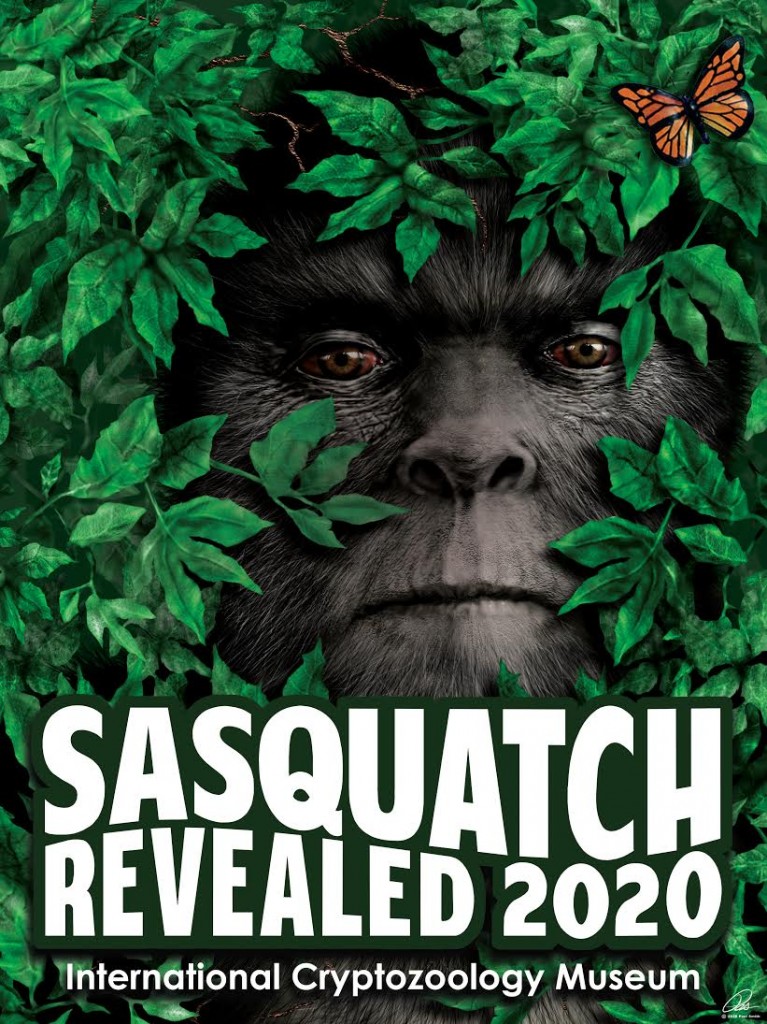 On August 1, 2020, the International Cryptozoology Museum, the world’s only nonprofit, public cryptozoology museum, began rolling out the “Sasquatch Revealed 2020″ exhibition’s artifacts and signage. Come visit, and soak in these new items at the Museum. 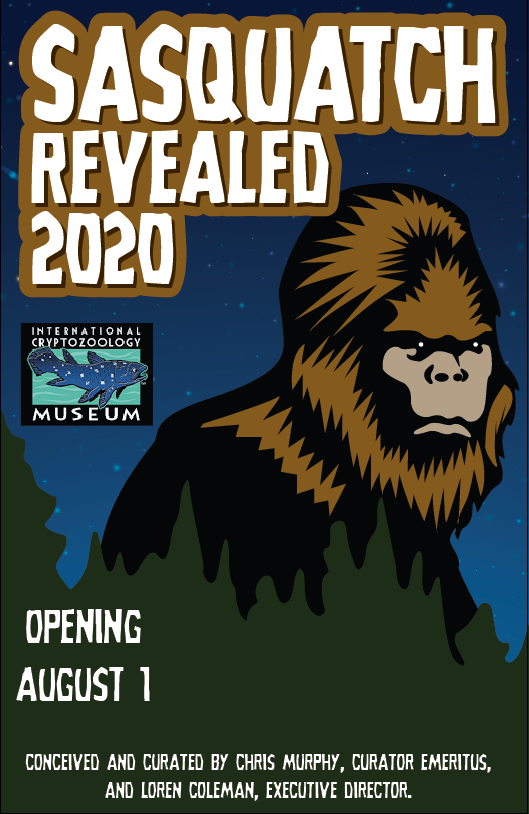 Some background…
On July 3, 2020, Christopher Murphy announced in his publication Bits and Pieces no. 118:
+++
Christopher Murphy, who curated the original 2004 exhibition, and Loren Coleman, the founder in 2003 and current director of the International Cryptozoology Museum, announce the following via this mutual press release, dated August 1, 2020:
<><><>
Chris Murphy’s ”Sasquatch Revealed”  museum exhibition has arrived, after a long cross country journey, at the International Cryptozoology Museum (ICM) in Portland, Maine.
Murphy’s exhibit opened at the Museum of Vancouver in 2004 and has since traveled, in whole or in part, to eleven exhibition venues and museums in British Columbia (BC), Washington State, Oregon, Idaho, Texas, and Indiana.
Murphy started working with the major Sasquatch researchers Rene Dahinden and John Green in 1993. They lived close to Murphy in BC so they were frequently visited. As time passed, Chris Murphy met and worked with several researchers, both in Canada and the USA. One in particular was Thomas Steenburg, who had moved from Alberta to BC. Murphy collected artifacts and artwork for amusement and created his own Sasquatch-related artwork (paintings and sculptures).
Chris Murphy authored the book Meet the Sasquatch (Hancock House Publishers, 2004) with associated authors, John Green and Thomas Steenburg. Artifacts and artwork Murphy had collected or photographed were featured in this book, which accompanied his curated museum exhibit. Since then, Chris Murphy authored or edited a number of titles, many of which will be offered, along with Loren Coleman’s Bigfoot!: The True Story of Apes in America, Coleman’s and Patrick Huyghe’s The Field Guide to Bigfoot and Other Mystery Primates, Mark A. Hall’s and Coleman’s True Giants, as well as others’ titles, on a rotating basis through the ICM gift shop.
Loren Coleman’s collection of Sasquatch, Bigfoot, and cryptozoology artifacts, popular cultural items, and evidence began in March of 1960, was followed by his extensive fieldwork, collecting trips and travels through most of the provinces and states of North America. In 2003, Coleman established a formal, 501(c)3 nonprofit cryptozoology and hominology museum, in Portland, Maine. Coleman was an early correspondent and friend of many of the now-deceased towering giants in hominology/cryptozoology ~ John Green, Rene Dahinden, Ivan T. Sanderson, Bernard Heuvelmans, Tom Page, Tom Slick, Grover Krantz, J. Richard Greenwell, Ted Holiday, Roy Mackal, John A. Keel, Vladimir Markotic, Carleton Coon, Mark A. Hall, John Bindernagel, Ray Crowe, Dmitri Bayanov, Barry Blount, Al Hodgson, Paul LeBlond, and Robert Rines. Coleman’s collection of cryptozoology artifacts is unrivaled in the field, and his hominology items (including Edmund Hillary’s 1960 expedition flag, Tom Slick’s Yeti hair/fecal samples, artifacts from Ruby Creek, B.C., nails from the Ape Canyon cabin, over 250 Sasquatch/Yeti/Orang Pendek/Yowie casts, First Peoples’ art, and hundreds of other items).
The combination of Chris Murphy’s curated collection with that of Loren Coleman’s museum artifacts, which became the core of the ICM, will create the world’s largest  and most comprehensive collection of hominology- and cryptozoology-related materials in history. At this time “Sasquatch Revealed” will be on permanent loan to the ICM and its final inclusion in the ICM collection is planned.
The ”Sasquatch Revealed” exhibit has been very popular wherever it was hosted around the continent, especially with young people and new people to cryptozoology. This nicely overlaps with the ICM’s mission that projects cryptozoology/hominology as gateway sciences to a broader understanding of zoology, anthropology, and biology, for youth, adults, laypeople, scholars, formal scientists, and amateur scientists. Chris Murphy’s showings of past exhibitions stressed the cultural aspect of Bigfoot/Sasquatch.  The ICM and Loren Coleman have a mission to deliver a strong cultural diversity orientation, as well, and look at the ongoing involvement of indigenous peoples in the understanding, experience, and discovery of new species.
Although one can question the reality of these hominoids, their cultural existence in North America can be traced back thousands of years and the evidence of this prehistory and history up to the present is beyond question.

[Please Note: On August 1, 2020, the giant 9-ft-tall skeleton will be on display, and throughout August, various items will be installed in the Museum. Also, during the coming months, the ICM will actually be expanding in spatial volume, as we "stretch our legs."]
- 0 - 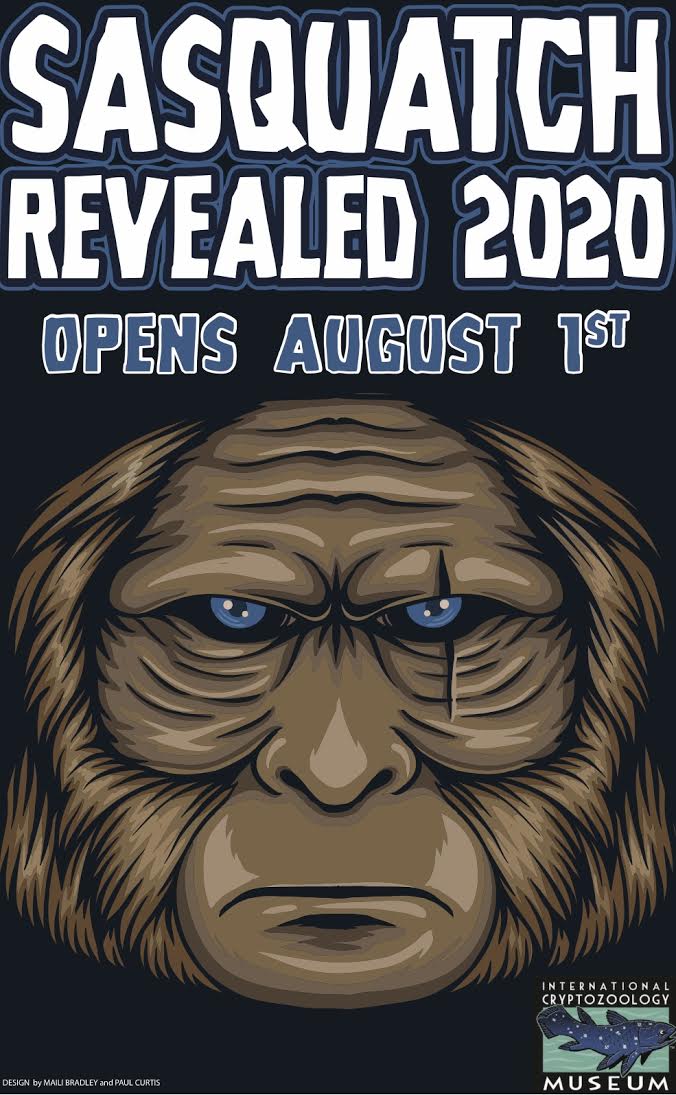 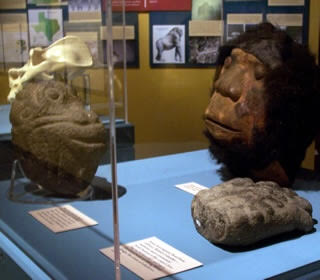 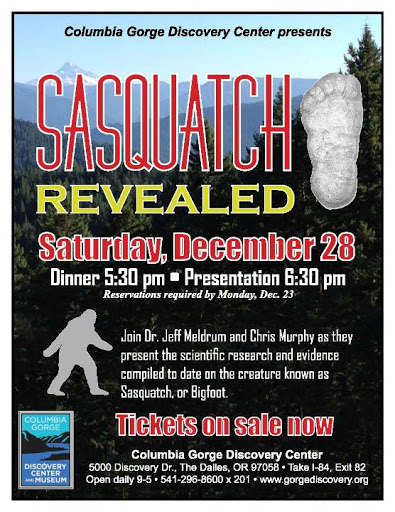 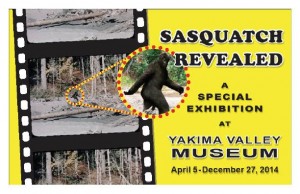 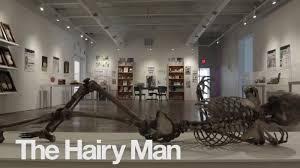 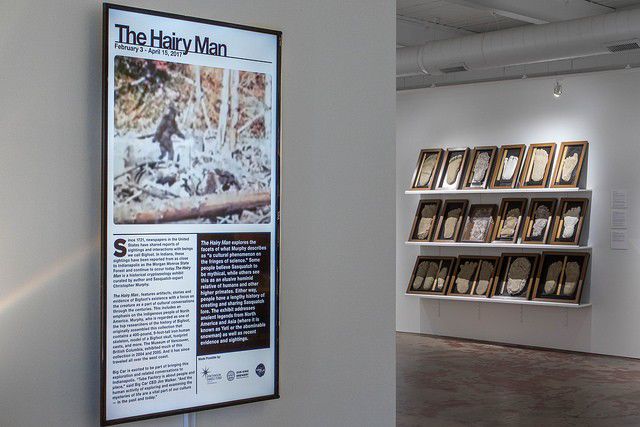 The Indiana exhibition was renamed “The Hairy Man,” for their showing only.
(9) February 3, 2017 to April 15, 2017 — The Tube Factory Artspace and the Indianapolis Contemporary,
formerly known as the Indianapolis Museum of Contemporary Art, (now permanently closed due to the 2020 pandemic), Indianapolis, Indiana, USA.
<><><> 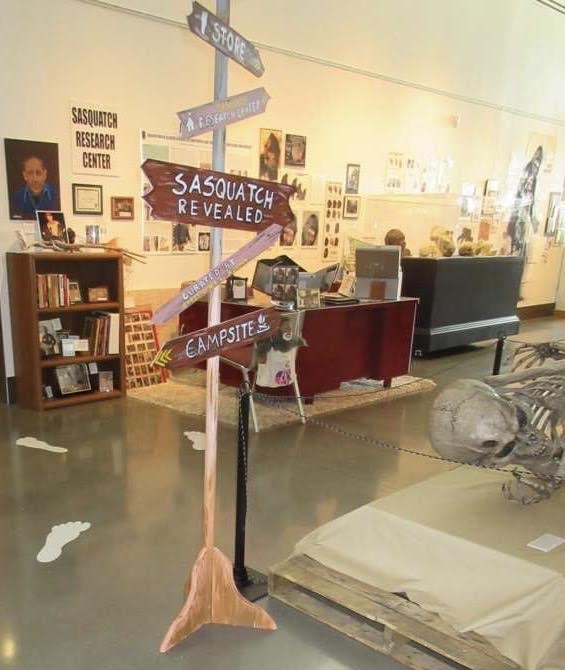 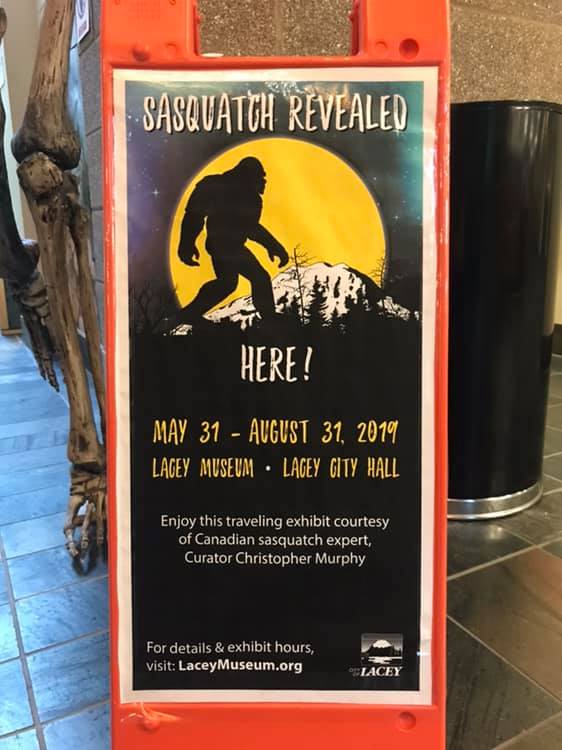 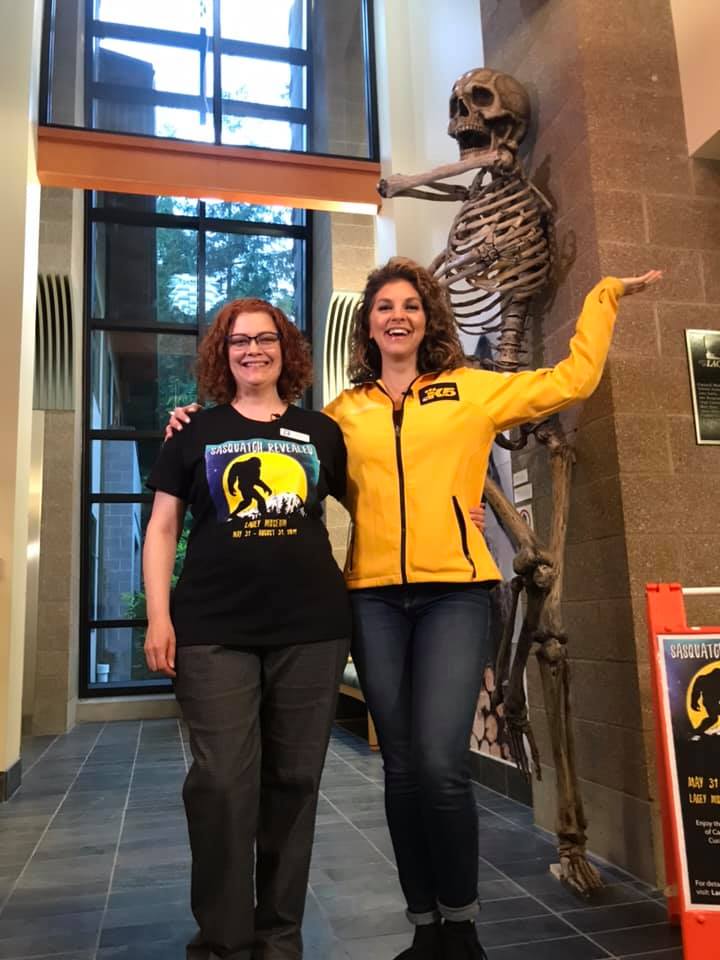 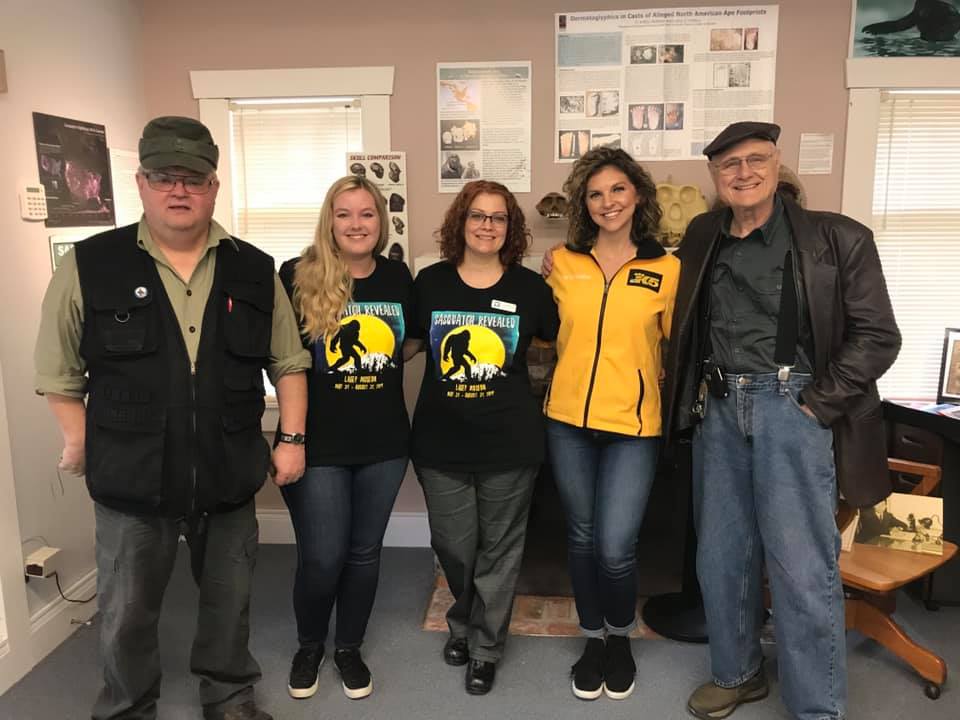 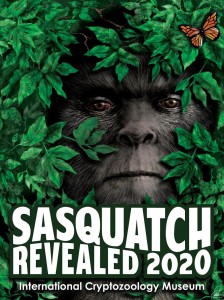 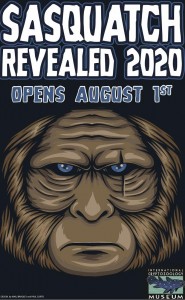 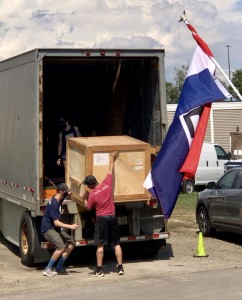 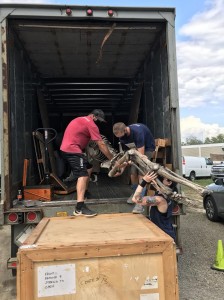 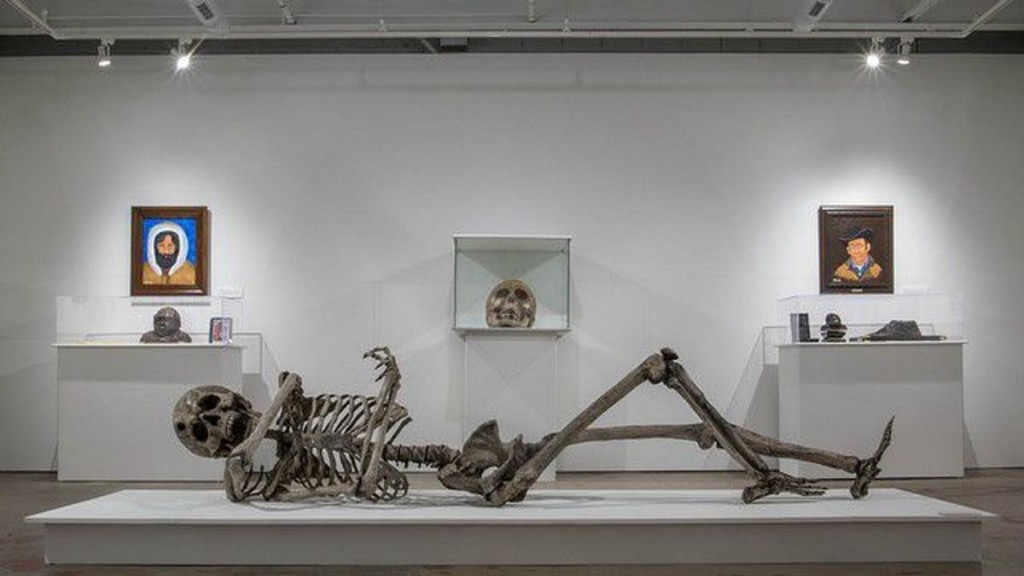 Indiana showed the skeleton at rest. 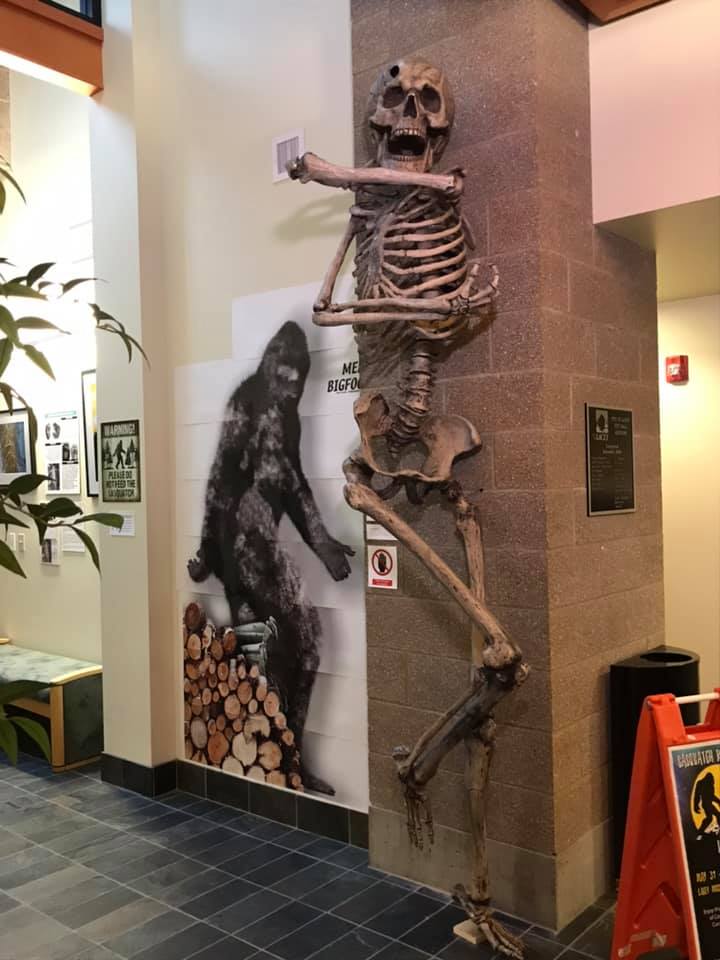 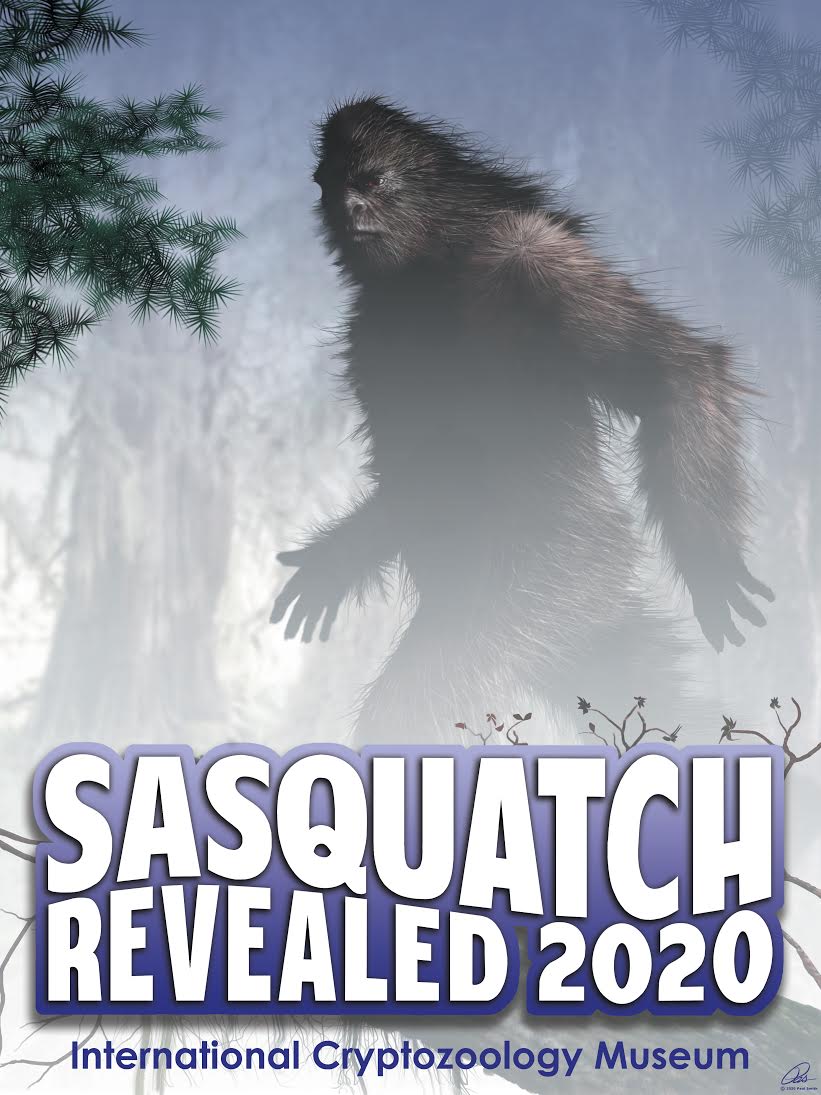 Special acknowledgement goes to Jeremy Efroymson and the Efroymson Family Fund for their partial support of the costs of the adventure of this exhibition and collection. Thank you to everyone who donated funds along the way. 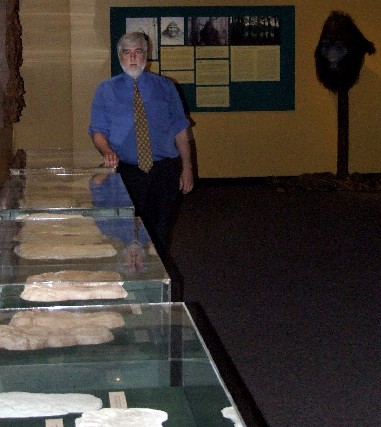 Loren Coleman at the site of an earlier showing of the exhibition in San Antonio, Texas, June 2006.