You are here: Home / Maned Mystery Lion On Norwalk Video

What appears to be a mature, aged African lion has been caught on tape in the Los Angeles area, in a residential area. The video footage (dated July 29, 2014) was caught in front of a home in the 11000 block of Tina Street near Orr and Day Road in Norwalk, California.

The city of Norwalk is located about 8 miles southwest of the Turnbull Canyon mountain bike trail in Hacienda Heights, which has had some reports of mountain lion sightings in recent years.

At first, it was thought to be a mountain lion. But upon closer inspection, and as you can see in these freeze frames of the video I made, there is a mane on the cat.

Norwalk Public Information Officer Jeff Hobbs told CBS-Los Angeles: ”I think most people are coming down on the side of, ‘Oh, that’s an old lion who’s just looking for something to drink.’”

The Los Angeles Times, fielding a variety of suggestions, did note:

Craig Packer — a professor at the University of Minnesota Lion Research Center and author of Into Africa – said after examining the footage: “Yes, it certainly does look like an African lion. It’s not a cougar.”

Experts at San Diego Zoo agreed that the animal “does not look like a mountain lion,” but that’s about all, spokeswoman Christine Simmons said….

Dale Anderson, executive director and founder of the Project Survival Cat Haven in Dunlap, Calif. — a big cat sanctuary — reviewed the video and said the animal appeared to be an African lion, pointing to its gait and physical characteristics.

No cat, lion, mountain lion, or felid-appearing dog have been located or captured.

The report has gone viral, and a wide variety of media are noting the story on Monday, August 3, 2014.

Below are my screen captures of the frames showing the mane. 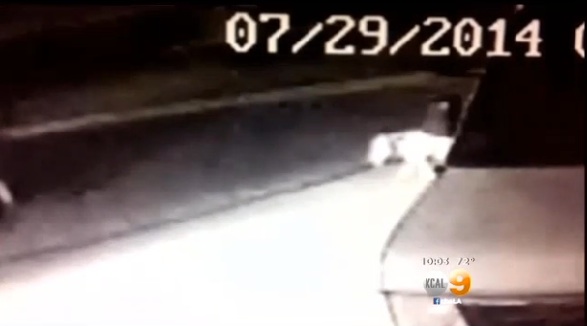 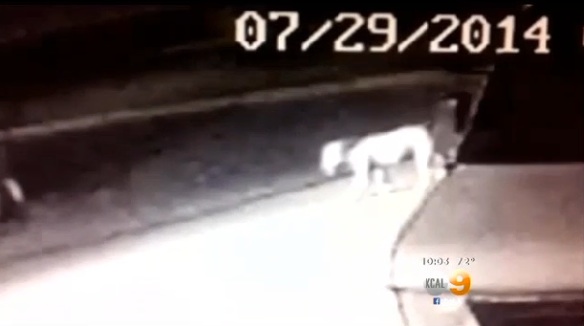 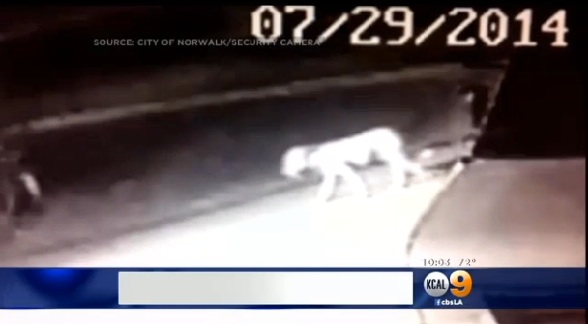 Are these relict Panthera atrox or escaped African lions? Even when these cats are taken, we sometimes still do not know, due to the fact most authorities are not familiar with these cats as cryptids. 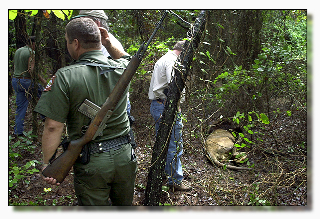 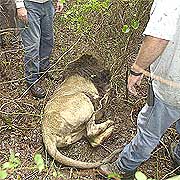 These existing photos of the two killed Arkansas lions (mostly one is shown), for September 23 and 24, 2002, were of “mystery cats” found and killed. They were said to not be escapees or pets. But then DNA sampling was not done, and both bodies were destroyed. Clearly the photos show a maned felid. What species were they?

I have written extensively about Maned Mystery Cats/Felids/Felines that appear to be African male lions, and sometimes are seen with tawny females with bushy tails, and/or black panthers, in my book Mysterious America.