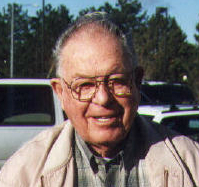 Bill Laughery of West Richland, Washington State, a former game warden and active Bigfoot searcher, has passed away. Cliff Barackman of Finding Bigfoot has informed me that Laughery died on July 28, 2014.

With the passing of Laughery, the senior core Bigfoot researchers of the Blue Mountains and Walla Walla area, have passed away.

Laughery was well-known for a sighting that he had in 1995.
Bill Laughery and Wes Sumerlin had a sighting of two Bigfoot about seven miles off Mill Creek Road, down from Biscuit Ridge, near Black Snake Ridge, Walla Walla, Washington State, on August 4, 1995. They had driven up into the mountains with Paul Freeman, after hearing of recent reports of Bigfoot in the area. From their local papers to Fortean Times and the Los Angeles Times, the report was discussed regularly.

“It was 7 to 8 foot tall, buckskin brown, I could see it well enough to see fringe about 1 inch high, a little, on the top of the head,” Laughery said to a reporter at the Los Angeles Times, for a January 21, 1996 article. “We were 87 feet away and we stood and watched that for four or five minutes, and it didn’t move at all. I looked it up and down. I couldn’t see its face. . . . I got a quarter-view. And then the minute I turned to Wes to say something, it took off.”

They heard screams, and found long dark brown and black hairs, which had caught on broken trees. They were sent to Frank Pourier, chairman of the anthropology department, Ohio State University, for DNA testing.

As recently as April 2013, Laughery was helping and speaking to Bigfoot groups.

Jaymi Trimble’s Northwest Bigfoot group had their first meeting on Sunday, April 13th, at the Mid-Columbia Libraries’ branch in Kennewick. Their guest speaker was Bill Laughery, whom Trimble told KOMO News, was her mentor.

Bill Laughery’s legacy lives on in the people he touched.
+++
Update:
The above is the news of Bill Laughery’s passing that I posted very early on the morning of July 30, 2014.
I called Laughery a “searcher” to convey that he was not in the shoot-and-kill camp. But the purpose of the tribute was to pass along the news and make certain he was remembered. As often happens, such news that I share stimulates local recognition of an individual who has toiled long hours in pursuit of cryptozoological goals.
I was happy to see that his local newspaper recalled Bill Laughery with an article, and not just a death notice. Drew Foster, writing for the Tri-City Herald, penned the article, “West Richlard’s Bigfoot hunter dies at 92.”
It adds information that readers here may wish to know. Laughery was born in Dayton, Washington State, and, as the headline notes, was 92.
Regarding the hair sample, noted the Tri-City Herald:

“He sent some of (the hair samples) to Idaho State University,” said Bernie Hart, a friend of Laughery’s who had helped care for the Bigfoot hunter’s first wife, Annabel, before she died about 13 years ago. “When they got back to him, they said (the hairs) were unknown.”

“He wasn’t a crackpot,” Hart said. “He was a pretty reliable source. He didn’t talk about them a lot because it was kind of like his sanctuary.”

The legacy of Laughery was also mentioned:

While Laughery’s personal search ended Tuesday, his passion for Bigfoot hunting will continue. Jaymi Trimble of Prosser had just returned from a Bigfoot hunting excursion south of the Canadian border when she learned of Laughery’s death through a Facebook post.

“I just miss him so much,” Trimble said. “He was my mentor, but he was also my special friend.”

Laughery had passed along maps of the Blue Mountains where he believed Bigfoot lived, Trimble said. He’d shown her casts of footprints and taught her how to recognize Bigfoot’s presence in the woods.

Bill Laughery is survived by his second wife Elvera, and two sons. Elvera Laughery told the newspaper about once going with Bill on a long drive through the Blue Mountains looking for Sasquatch, without results. “But there were other times when Laughery would return home with a cast of a giant footprint or a few strands of hair that weren’t quite human nor quite beast,” mentioned the reporter.
It is good the newspaper recalled Bill Laughery, straightforwardly and with respect.
by Loren Coleman on July 30, 2014 in Bigfoot, Breaking News, CryptoZoo News, Men in Cryptozoology, Obituaries, Sasquatch | Tagged Bigfoot, Bill Laughery, Blue Mountains, Cliff Barackman, Grover Krantz, Obituary, Paul Freeman, Sasquatch, Vance Orchard, Wes Sumerlin
Previous Entry: The All-Time 50 Best Bigfoot Books (1961-2014)
Next Entry: Maned Mystery Lion On Norwalk Video