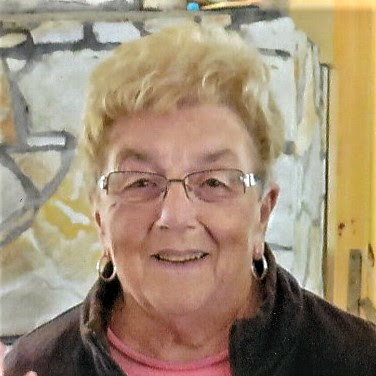 Patricia Ann Sparks, 84, the widow of Bigfoot eyewitness Cliff Sparks, and owner of the golf course they co-founded, has died on Friday, June 4, 2021, after a long battle with COPD. She was a caring guardian of the tradition of the Whitehall Bigfoot.

She married her childhood friend and high school sweetheart Clifford N. Sparks in 1955 in Niagara Falls. After their marriage, they moved to Fair Haven, Vermont.

In 1960, Cliff and Pat bought a dairy farm in Whitehall, New York, which they eventually turned into an 18-hole golf course.

Whitehall is pivotal in Bigfoot sightings in New York State. Today, if you visit the Sparks’ Skene Valley Country Club, 129 Country Road 9a, Whitehall, you can see artifacts of the area’s encounters. 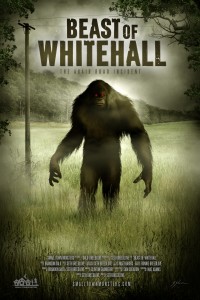 Small Town Monsters’ production of Beast of Whitehall concentrates on the Abair Road incident of 1976, the year following the Sparks encounter. 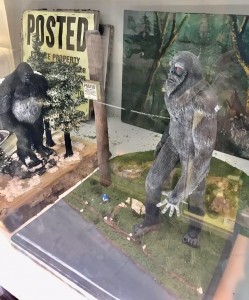 Adair Road display at the International Cryptozoology Museum, with the actual sign from the telephone pole being discarded.

There is a fading sign on the golf course’s country club, and a newer Bigfoot statue at the first hole. Pat Sparks was the steward of these markers of her husband’s sighting. An older red flag from the course’s hole #1 was donated by the Sparks and Paul Bartholomew to the International Cryptozoology Museum. 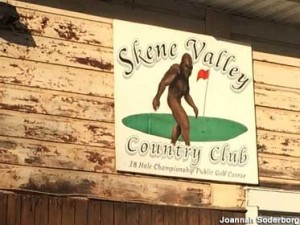 Paul Bartholomew recalls: “Pat was always helpful and open with people regarding Cliff’s sighting – just a wonderful person. Ironically, back in 2003, wild boars ran through Whitehall and Pat was the only person to get pictures of them.” 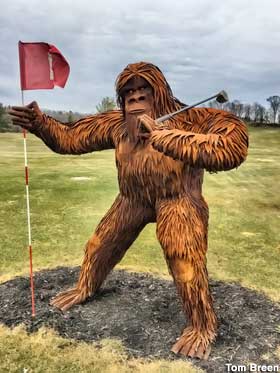 In 1975, golf course owner Cliff Sparks, at the Skene Valley Country Club in Whitehall, New York, saw a tall, hairy, man-like, creature, with big red eyes, bigger than himself, on the golf course. He observed it quietly, and then saw it quickly crashing through the woods. Then two boys had a sighting to become part of the continuum of the region’s hairy biped sightings.

“I think more people believe now,” says Sparks, who after the sighting decided to add Bigfoot’s image (hoisting a golf flag) to his club’s logo. “I think some people probably think I’m crazy, but they weren’t there. They didn’t see it.”

In 2012, Paul and Robert Bartholomew passed along the news that Cliff Sparks had died.

The Bartholomews sent this:

It is with great sadness to announce the death of Cliff Sparks. Cliff passed away recently following a long illness.
It was 1975 that Cliff spotted a creature on his golf course, on Norton Road, Whitehall, NY. After over a year of remaining silent about the incident, Cliff came forward with his encounter, telling the parents of Bob and Paul Bartholomew– thus essentially outing himself. The incident was written up and became one of the classic Sasquatch encounter cases of New York state.
Over the years Cliff was visited by many researchers, curiosity seekers, and news media, from all over the world. He always exhibitted an open, friendly and candid attitude when relating his experience.
The Outdoor Life Network and History Channel both visited and interviewed Cliff. However, in 2008, he was interviewed by Mike Carnivale of the local program “Adirondack Journey.” This is probably his best interview as he spoke openly about a seven-foot tall creature which had red-eyes. The eyes were the most dramatic feature to Cliff. After over thirty years, Cliff said the incident still scared him.
Cliff always embraced his experiemce with great courage and honesty. He is and will be greatly missed.
Paul B. Bartholomew/9-10-2012

I was able to locate the official obituary for Cliff Sparks, which details his age, date of death, and other personal information:

Clifford N. Sparks, 76, owner of Skene Valley Country Club, passed away Sunday, Sept. 9, 2012, at home with his family by his side after a long battle with lung disease. Born Oct. 6, 1935, in Niagara Falls, N.Y., he was the son of the late Gladys and George Sparks.

He married his childhood friend and high school sweetheart, Patricia Ann Thomas, in 1955, in Niagara Falls, N.Y. After their marriage, they moved to Fair Haven, Vt., where Cliff worked as a cattle artificial inseminator. In 1960, Cliff and Pat bought a dairy farm in Whitehall, N.Y. Cliff eventually turned his farm into an 18-hole golf course.

Cliff was a member of the BPOE ELKS Lodge No. 1491. He enjoyed spending the winter months in Lake Suzy, Fla. He was an avid golfer and hunter. Some of his favorite pastimes were playing in the annual Bigfoot golf tournament with his grandsons and hosting an annual fishing derby for his grandchildren. Cliff enjoyed sitting and chatting with all the friends he made through the years of owning the course.

The importance of Sparks’ golf course figured in his final goodbyes. A funeral service was held for Cliff Sparks on September 12, 2012, on the 18th hole at Skene Valley Country Club in Whitehall, New York.

In 1973, as Muirfield Village Golf Club was under construction near Dublin, an area farmer and two security guards working at the golf course reported seeing a “hairy monster” resembling the fabled Sasquatch or “Bigfoot.”

A Columbus Dispatch article dated Oct. 1 of that year reported that an eight-foot creature with long white hair was spotted three times by the guards after the farmer, who later refused to leave his home after dark, first encountered it near a fairway.

Well-known cryptozoologist Loren Coleman has studied Bigfoot sightings for more than 45 years and reports Ohio has been considered a hotbed of sighting activity for years.

“What you also discover if you examine as many reports as I have is that golf courses, which preserve local wild spaces and wildlife, are often locations of sightings,” Coleman says.

A June 24, 1980 report of an unusual creature seen in neighboring Union County is believed to have been near a golf course, though the eyewitnesses said the creature “had no golf clubs.” Two days later a Logan County golf course groundskeeper and part-time police officer saw something that “smelled worse than Limburger cheese” and left 16 inch-long footprints.

And in March 1987, an Allen County teenager spotted a similar creature getting a drink of water as he crossed Lost Creek Golf Course in Lima on his way home.

Similar golf course reports Coleman has researched over the years aren’t limited to the Buckeye State. In 1975 a member of Skene Valley Country Club in Whitehall, N.Y., saw a “big, strange something with glowing red eyes;” a Delray Beach, Fla., course superintendent was scared by a seven-foot “skunk ape” sporting shaggy black hair in 1977; a mysterious creature appeared to stalk a jogger near a golf course in Elmira, N.Y., in 1989; and large Bigfoot-type tracks were found at a golf course under construction near Seattle in 2002.

One difference between reports from other states and those occurring in Ohio seems to be the color of the creature’s hair – brown, black or dark-red elsewhere, light-colored here.

“Most hairy hominoids are not white-furred,” says Coleman, who has written more than 20 books including 2003′s Bigfoot! The True Story of Apes in America.

“In Ohio and Pennsylvania, there appears to be a gene pool of white and piebald Bigfoot,” Coleman says. 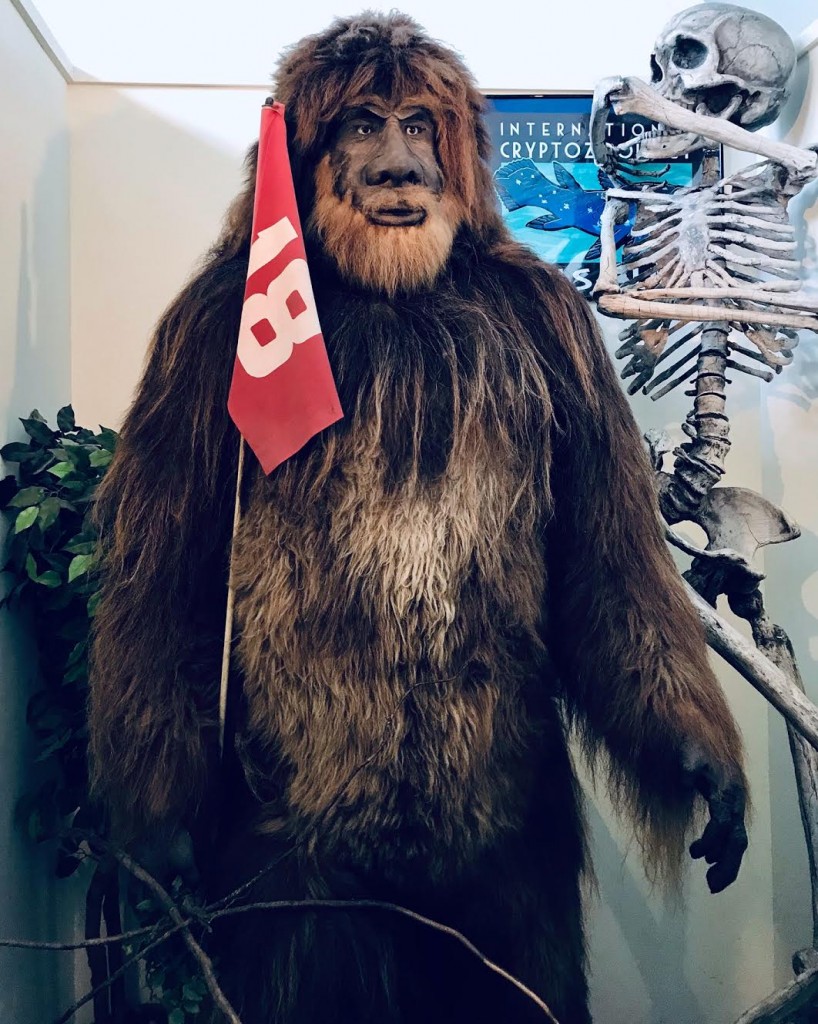 Pat Sparks, 84, who died Fri, Jun 4, 2021, is remembered at the International Cryptozoology Museum. Her mass is at 11:00 am, Jun 8, 2021, Our Lady of Hope Roman Catholic Church, in Whitehall, New York. At the ICM, we have affixed the 18th hole flag to our Crookston Bigfoot on display. The flag was donated after her late husband Cliff Sparks’ service at that hole in 2012.