You are here: Home / Monsters of New Jersey Is Out

Monsters of New Jersey Is Out 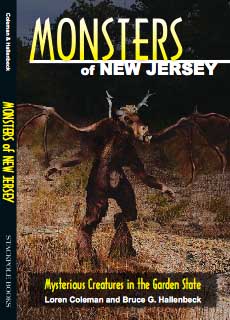 Monsters of New Jersey by Loren Coleman and Bruce G. Hallenbeck officially out on September 1, 2010, is widely available now. The book is published by Stackpole Books, and will be available everywhere for that intriguing little gift to yourself, for an enjoyable read.

Be sure to buy two to put under the tree near the front door of those special people you love at Halloween! Also, don’t forget to buy extras to take to bride and baby showers, for birthdays, and during school breaks. Everyone always mentions the holidays, but you can figure those times out yourself, so just wanted to mention examples of other times when the book could come in handy. 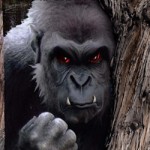 Bizarre beasts stalk New Jersey, from down the shore to the creepy Pine Barrens and even in many of the bustling cities. This book presents stories of the best known of the Garden State’s cryptid population, including Big Red Eye, the state’s resident Bigfoot, found in the Great Swamp of Somerset County; Monkey-Man of Hoboken, an urban Sasquatch; the Lizardman of Great Meadows; and, the state’s most infamous creature, the Jersey Devil.

The items in “Table of Contents” are:

More Winged Wonders and the Wooo-Wooo

A Note on Style

The dedication to the book is for Jerry Dale Coleman, William Coleman, Susan Hoey, & Martha Hallenbeck. The first three are my siblings, and the last is Bruce’s late grandmother.

Monsters of New Jersey: Mysterious Creatures in the Garden State can be ordered online or at your favorite bricks and mortar bookstores.

In the meantime, I’m still looking for the following figurine for the museum, if anyone knows where I can get one…

Copies of Monsters of New Jersey: Mysterious Creatures in the Garden State, which I will personally autograph for you, if you wish.