You are here: Home / Bigfoot, Bullets, and Dum Dums 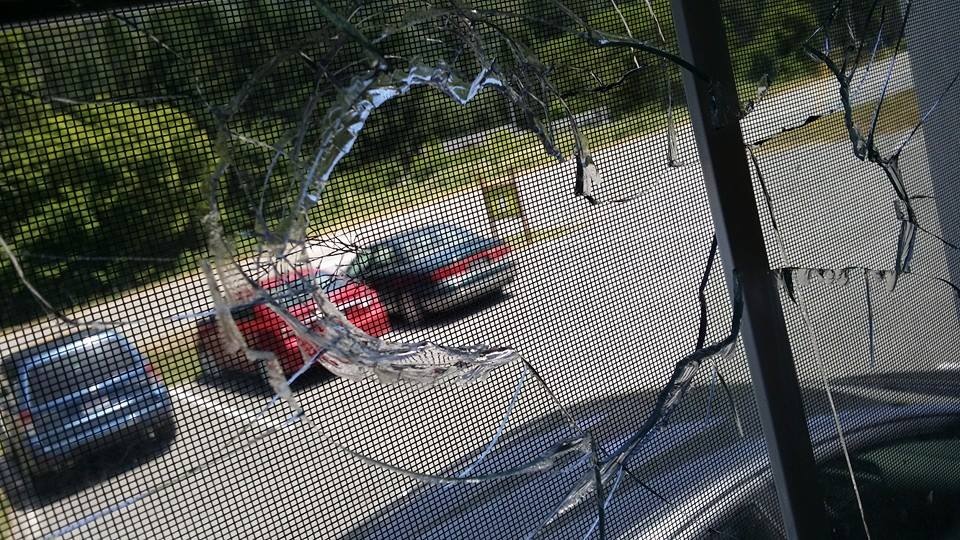 There was a rare event this week.

A bit of Sasquatch-related gun violence occurred. It may or may not have been consciously directed at an outspoken individual in the Bigfoot community. But the fact is someone apparently conducted a drive-by shooting at the very rural location of Bigfoot Books in Willow Creek, California. 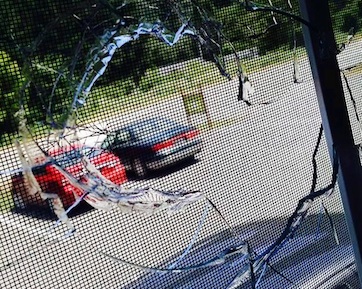 A bullet broke the double-paned front window and zipped right through the screen. 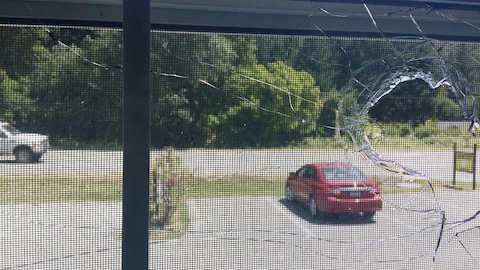 In this photo, the screen lines up with the level of the cab of a pickup or SUV driving by, demonstrating the bullet probably was fired from rural Highway 299.

Steven Streufert found “glass strewn all about the inside.” 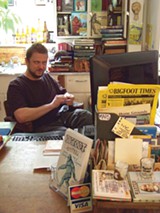 Steven Streufert, inside his store. Streufert is one of the main organizers of the Bluff Creek Trail Camera Project, which now has 20 working trailcams in place. Photo by Helen Walters. 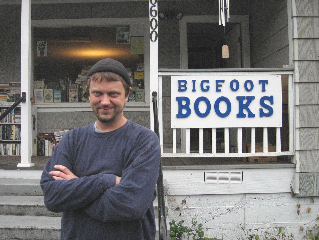 Streufert, the owner of Bigfoot Books on 40600 Highway 299, Willow Creek, California, is one of the leaders in the Willow Creek and Bluff Creek area, preserving significant pieces of local Bigfoot history. Photo courtesy of Tom Yamarone. 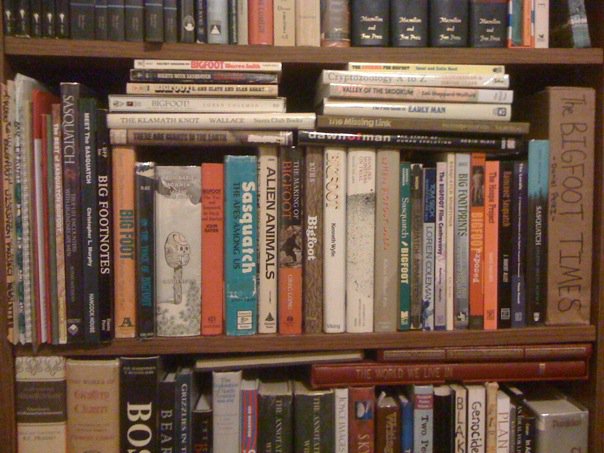 Bigfoot Books, 1.5 miles east of downtown Willow Creek on Highway 299, is a general purpose used book shop, that, as the name implies, specializes in books about Bigfoot.  The store is located along the Trinity River in the “Bigfoot Country” of inland Humboldt County, northern California, and went public in 2005. 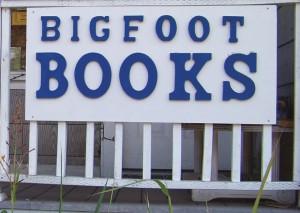 The owner, Streufert, is a professional bookman and bookseller, and has worked with books, in brick & mortar stores and in libraries, since the mid-late 1980s. He has been an antiquarian since 1992, and online since 1999.

Streufert’s blog, Bigfoot’s Blog, has existed since 2008. His Facebook group, Coalition for Reason, Science, Sanity in Bigfoot Research (with nearly 2000 members) was formed in 2011. 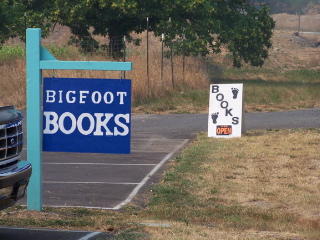 I interviewed Steven about the recent incident, and have extracted, with his permission, additional details he’s noted online.

CryptoZooNews: You’ve been challenged about this even really having happened. Did you contact law enforcement?

Steven Streufert: I left the store around 7:00 pm [Monday] and arrived at 11:30 am the following morning [Tuesday]. The dentist next door was there earlier. Hence it should have occurred at night.

CryptoZooNews: What, did you get death threats?

Steven Streufert: These weren’t death threats. I never said that. They were implied threats of confrontation or possible violence. One was in PM [private messaging],  and one was a Facebook comment. I’ve had a good number of threats in the past, of violence and litigation.

Steven Streufert: I have had no vandalism or other problems with locals.

CryptoZooNews: Your store is isolated. This appears to be a serious matter. What concerns you the most?

Steven Streufert: My daughter is OFTEN here in the shop with me, especially now as school is out for the summer. 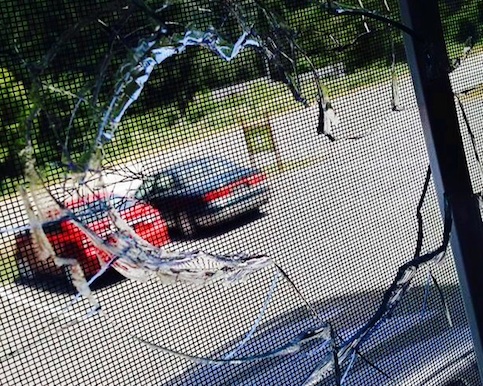 The bullet was found. Streufert described it as a larger caliber bullet. It was taken by the Sheriff’s Department for the investigation.

“A hefty copper-jacketed slug,” said Streufert. “It was a big, fat slug. It was all smashed, but had glass embedded in the tip, as if it were a hollow pointed kill bullet.”

Hollow-point bullets were first manufactured in the late 19th century to kill humans, and called express bullets. They are literally hollow down the middle. The Hague Convention of 1899, Declaration III, prohibited the use in international warfare of bullets that easily expand or flatten in the body. Despite the ban on military use, hollow-point bullets are one of the most common types of bullets used by civilians and police, which is due largely to the reduced risk of bystanders being hit by over-penetrating or ricocheted bullets. They are the bullets of choice for targeted assassinations, due to that fact. 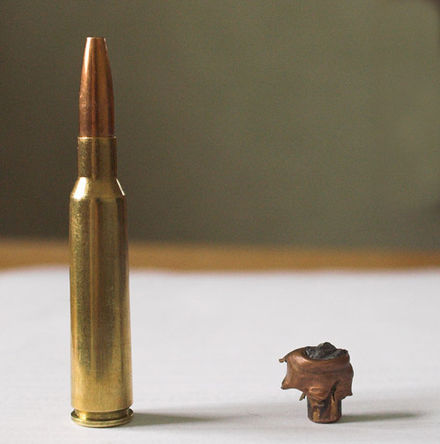 This is a hollow-point 6.5×55mm Swedish before and after expanding. The long base and small expanded diameter show that this is a bullet designed for deep penetration on large game. The bullet in the photo traveled more than halfway through a moose before coming to rest.

The hollow point and soft-nosed bullets are both sometimes also referred to as dum-dums, so named after the British arsenal at Dum Dum, in present north Kolkata (called Calcutta by the English), India, where it is said jacketed, expanding bullets were first developed. Coincidentally, the widespread use of the term “Abominable Snowman” began in 1921 from Calcutta. Henry Newman, a longtime contributor to The Statesman in Calcutta, writing under the pen name “Kim,” interviewed members of the “Everest Reconnaissance expedition,” and learned about their “Abominable Snowman” track findings. The era of the Yeti was born in the same place as dum-dums.

In the USA and Canada, “dum-dum” is a term not often heard. American recreational shooters sometimes refer to hollow points as “JHPs,” from the common manufacturer’s abbreviation for “Jacketed Hollow Point.”

To be most correct, the term “Dum Dum Bullet” refers only to soft-point bullets, not to hollow points, though it is very common for it to be mistakenly used this way.

[Needless to say, these kinds of bullets have evolved, through their history, to be used extensively in domestic hunting, and by local law enforcement officers. This article is not about hunting or the responsible use of hollow points or dum dums, but about a shooting by a human into a Bigfoot book store.]

These may be dangerous times for Bigfootery. There certainly is an active camp of “haters” out there who are unaware of their own blindness, words, and effect on others. Some of those haters haunt online Bigfoot forums, and the general Bigfooter may think that those vile people are merely trolling, hidden behind their computers.

However, the current climate of violence supported in some of these “online debates” could cause copycat-level events that are at a distance from the original individuals making the forum remarks. I wrote an entire book about how this kind of contagion behavior works. The flames of minor hostile acts being fanned by others’ aggressive words do result in more violent acts; it is a well-proven, well-researched fact.

The one location, the epicenter that many Bigfooters seek out is Willow Creek. It there where local people like Streufert naturally stand out as a target for some vulnerable, mentally unbalanced person who feels he/she has been hurt by a blog comment or a Facebook remark. Such is the unreal reality of today’s social media world.

The sensational nature of Bigfoot entertainment television series, such as Finding Bigfoot and Bigfoot Bounty, reinforce the notion that infighting, disagreements, and verbal anger are a large part of the Bigfoot search. But these facets of the “research” are over-dramatically increased, via editing, for the benefit of ratings and to obtain more viewers. Bigfooters are not having fist fights at Sasquatch conferences, or yelling matches at Yeti enclaves. 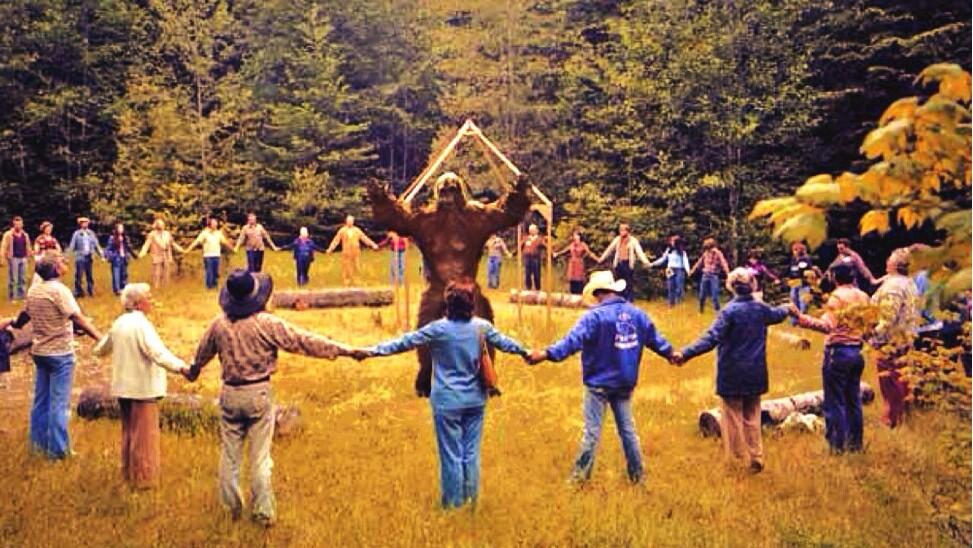 But hominology conferences are not love fests or cult gatherings, either. Most are a combination of serious debates of theories, examinations of the evidence, holding of social events, and the collecting of mini-field experiences, parasocial behavior opportunities, and souvenirs.

The only real dumb-dumbs in all of this are the people shooting at windows. And directing their hatred outward.

Leave your guns at home if you plan to go visiting or camping in Willow Creek and Bluff Creek, folks.

Humans and Bigfoot, alike, will be safer. 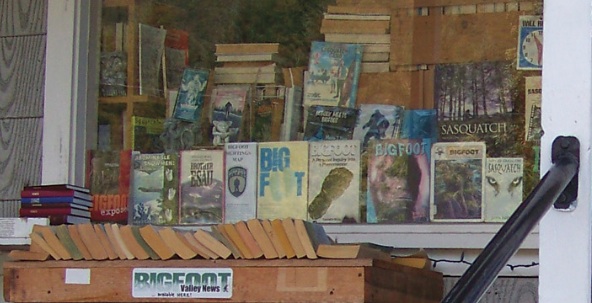