You are here: Home / What’s Your Favorite “Celebrity Cryptid”?

Wireless Flash – FlashNews has taken on a new public persona, as evidenced by a story they have just published entitled “New Monsters Encroach on Bigfoot’s Turf.” (Routinely before, FlashNews was a subscription only service for radio station news directors, mostly. Now the subscription gives access to interviewee contact info, but the stories themselves are now visible to the public, with photos.)

In today’s story, FlashNews quoted me as saying:

No matter what new creatures are discovered, though, Coleman says nothing can shake the public’s fascination with “celebrity cryptids” like Bigfoot, Nessie, Mothman, and the Chupacabra[s]. He runs the world’s only International Cryptozoology Museum out of Portland, Maine, entirely dedicated to the famous monsters and their peers.

What about it? Which ones do you like, personally? Leave your reply in the comment section below. Thank you. 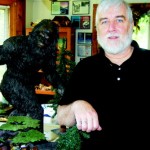