You are here: Home / Zanesville: Heartache and Humor

The release of over 50 animals and the self-inflicted death of the owner of the Zanesville exotic animal farm resulted in a variety of images, some full of pathos, others sharing some comic relief. The owner’s release of so many wild animals in the midst of Ohio was a death sentence for them. This individual actually carried out a massive murder-suicide plan.

Any notion that these formerly captive specimens might have truly become feral, and then reported as cryptids was not based in reality.

Here is a sampling of some of the recent images that attempted to deal with the outrage. 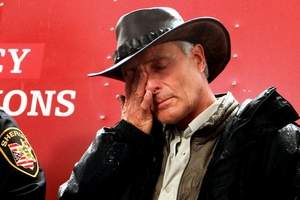 The need to deal psychologically with the pain of the incident produced the posting of a variety of photographs from other times, other places, as well as the modification of one map from the media’s documenting of the massive escapee event.

Artist Mark Lee Rollins (Thunderbirds, Field Guide to Lake Monsters) moi-modified the above image to reflect some other possible escapees. Others, below, tried to convey other feelings.

===
Jack Hanna told ABC News’ Diane Sawyer:
“I’m sorry to say, but what the sheriff did had to be done. Otherwise, we would have had carnage out here in Zanesville, Ohio.
“Tragedy-wise for me,” he added, “[it's] probably the worst thing in 45 years of history of working with animals. … I’ve seen poachers kill in the wild. I’ve seen animals killed right in front of me with their horns cut off. I’ve seen a lot of things happen in my career, but nothing like this have I ever witnessed.”
Hanna said tranquilizing wild animals is not as easy as many people believe.
“I’ve been out all over the world tranquilizing animals,” he said. “Can you imagine trying to tranquilize an animal in the dark. Fine, we have a spotlight. We hit it. You don’t know exactly: Did you hit a muscle? Did you hit a bone? If you hit the bone, the plunger might not work and put the medicine in. So what do we do? Then we send a veterinarian or the sheriff up there to see if the animal is down, right? What’s gonna happen if the animal is just sitting there not even asleep? You’re dead.”
Hanna told Sawyer that when the wife of Terry Thompson, the man who released the animals and then committed suicide, arrived on the scene, she was shaking and angry.
“She said she was coming to rip me apart because I was taking her animals,” said Hanna, who is helping move the remaining animals to the Columbus Zoo in Powell, Ohio. “When she came in there, she was totally not – just nothing was left. Her husband had just committed suicide. … She has 30-something animals laying there in her driveway that are gone. … She was shivering. I hugged her. I started crying with her.
“I could have yelled at her – you know … to lose 18 Bengal tigers in the world today is beyond a tragic loss,” Hanna said. “I can’t describe what that does to me, along with all the other creatures. But when you see a woman that’s lost everything, what do you do? Do I sit there and yell at her? … I sit there and console her and tell her I’m going to try to help her with her animals that’s left, which is nothing, basically. That’s all I could do.”
Sawyer asked Hanna how long the event would stay with him.
“It’s going to haunt me for the rest of my life,” Hanna said. “What happened here last night had to be done or else we would have had some major losses of human life here this morning. And I won’t forget what happened here today as long as I ever live.”