You are here: Home / Yeti Boots

All over the globe, according to various media outlets, like the Cleveland Leader, the greatest new fashion statements are being make by Yeti boots!

Roman Lang’s “yeti boots” (below) is a superb example of the penetration the motif has reached.

Writes fashion reporter Julie Kent : “Chanel’s version is an over-the-knee cut with faux fur and a transparent heel that’s supposed to look like an icicle. Dolce & Gabanna’s version is as equally hideous covered in rabbit fur. And lastly, Manolo Blahnik also has put out a pair covered in Himalayan goat hair.”

Of course, the knockoffs appearing at Wal-Mart, Wall-Drugs, and Target can’t be far behind.

In the meantime, here are examples of various Yeti boots being sighted, worldwide, for which no field guide is required. 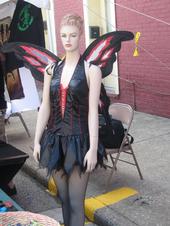