You are here: Home / What Do You Think Of Two New Bigfoot Videos?

What Do You Think Of Two New Bigfoot Videos?

Doesn’t it seem too good to be true? A company looking for publicity for their app asks for Bigfoot and other cryptid videos, and they are sent two good ones?

The British Columbian software development company PlayMobility issued an open call on Twitter on July 16 for footage of legendary creatures like Sasquatch, the Loch Ness Monster or the Ogopogo, a water serpent said to reside in B.C.’s Okanagan Lake.

The first video, posted on July 18, 2013, shows a group of Chinese tourists watching an upright, hairy figure moving around in the woods. The Chinese crowd is startled and moves in to film and photograph the Bigfoot, as the creature is heard grunting in the distance. Someone off camera says “Sasquatch,” as can be heard on the video, noted the Canadian National Post.

But what can be seen in the video? A human in a suit, performing for tourists? A staged event? A surprise encounter?

The second video, posted on July 24, provides a faraway, shaky-camera shot of another hairy creature standing upright on top of a hill. This video has been viewed more than 435,000 times since it was posted.

“A couple were hiking on a logging road above one of the lakes in Mission, B.C., when taking photos of the scenic views they spotted something moving,” the company writes.

“Even though they were a fair distance away they were still able to zoom in enough to see something standing upright. Bear? Man? Something else?”

The footage of this alleged Sasquatch, near Mission, British Columbia, has gone viral. 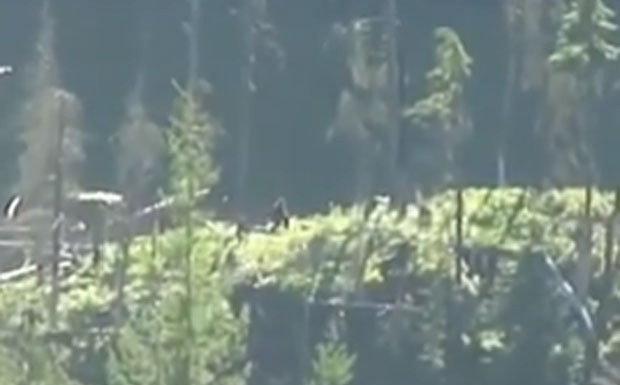 Are these viral videos helping selling product? PlayMobility makes a mobile app called Legend Tracker, a geocaching game that inserts cryptids like Sasquatch into mundane, normal settings. The app lets users “search” for Sasquatch in Mission, B.C., using tips and tools they gather along the way, noted the National Post.

We need closeups and more enhancements of these videos, folks. That’s for sure.

So, what do you think of these videos?

Previous Entry: Dead Animals Are Dead Animals, Not New Species
Next Entry: CryptoArt and Other Donations Just In