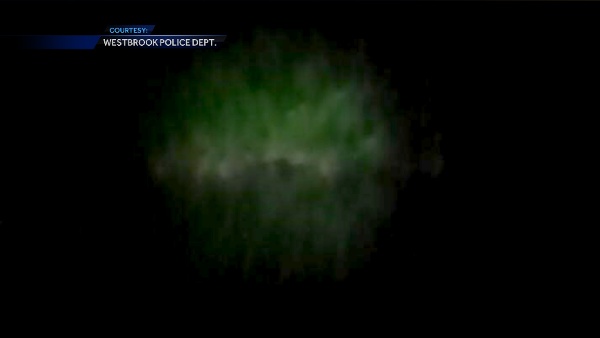 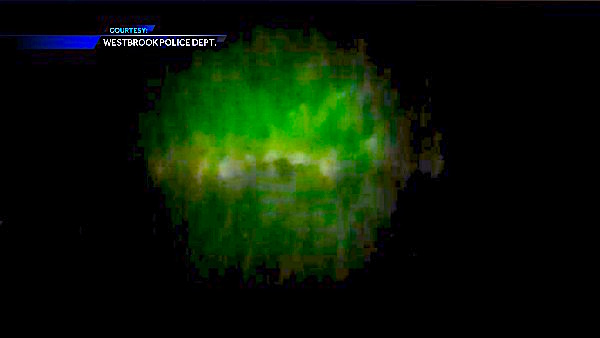 Maine has experienced a series giant cryptid snake accounts in Westbrook, Maine, a city located next to Portland, Maine. An image (above) of the reptile in the water was taken by the Westbrook Police Department. They were disappointed in the results.

“The officer took a video, however it was worse than the Loch Ness photo and Bigfoot video,” the department posted on its Facebook page, reported the Portland Press Herald on June 29, 2016.

The first sighting of the large snake occurred on Thursday, June 23, 2013.

Westbrook police are looking into a report of a large snake at Riverbank Park. A woman told police she saw the snake near the playground on both the Main Street and Brown Street side of the Presumpscot River.

She told police the snake was as long as a truck with a head the size of a small ball. Police initially released the information on the department’s Facebook page, describing the snake as “very large.”

Police do not believe the report is a hoax.

Reports said the eyewitness compared the head to the size of a “soccer ball.”

The next day, another sighting took place.

A second person has reported seeing a large snake near Riverbank Park in Westbrook, but told WMTW News 8 it was smaller than what was earlier reported to police. A woman told police Thursday that she saw the snake near the playground on both the Main Street and Brown Street side of the Presumpscot River.

She told police the snake was as long as a truck with a head the size of a small ball. Police initially released the information on the department’s Facebook page, describing the snake as “very large.” They believe it could be a large native species, or an abandoned pet. 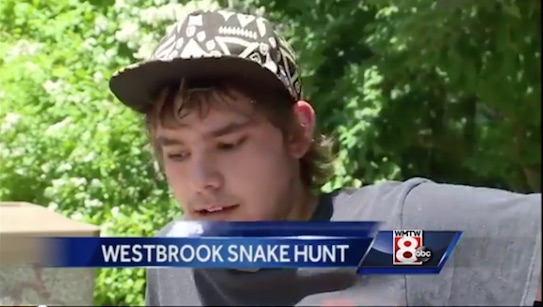 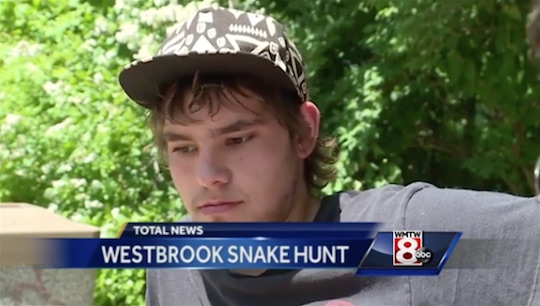 City crews searched the river Friday with no luck, but Devin Saunders [pictured], of Westbrook, said he saw the snake near the railroad bridge.

“I saw the snake on the rocks,” he said. “Just all black. Coiled up. Probably as long as a bench.”

A large snake that has captured the attention of Westbrook residents for the last week was spotted Wednesday [June 29, 2016] morning by a police officer.
Police said the officer was patrolling near Riverbank Park around 3:30 a.m. when he saw the snake in the area of Speirs Street.
Police said the snake was eating a large mammal, possibly a beaver.
A second officer arrived a short time later, and both officers watched the snake swim across the Presumpscot River to Brown Street, where it disappeared into the brush.
The officers estimated that the snake was at least 10 feet long.
One officer was able to take a picture, which shows a blurry green mass.
The Maine Warden Service was contacted and police said wardens expect that the snake will be dormant for the next few days because it just ate a substantial meal.
Locals have dubbed the snake the “Presumpscot Python” or “Wessie.” Police have been searching for the snake for about a week after a woman reported seeing it near the playground at Riverbank Park.
…
The snake was first seen on June 23. It was described as being the length of a truck with a head the size of a soccer ball.
…
Onlookers stopped by the park, anxious for a chance to see the snake.
“I think it’s so cool and so interesting, and I’ve never seen anything that big before,” Susie Gale said. “It’s kind of fun to have just all the excitement of everybody looking for the snake. It’s kind of like the Loch Ness Monster.”
Source: “10-foot Westbrook snake spotted eating animal, police say: Locals dub snake ‘Wessie,’ ‘The Presumpscot Python,’” by David Charns, WMTW Channel 8, June 29, 2016. 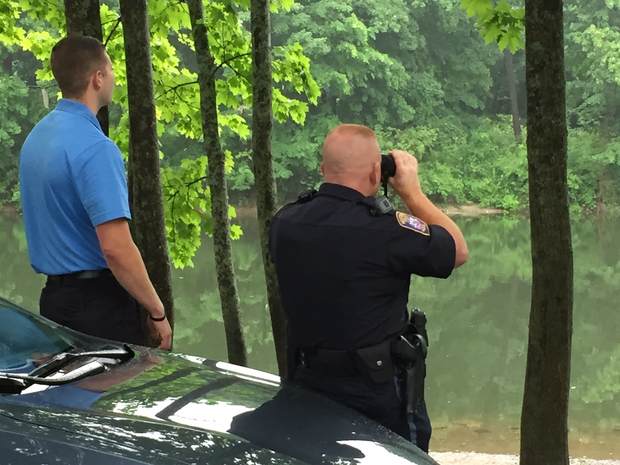 Westbrook police officers search the banks of the Presumpscot River Wednesday [June 29, 2016] after a large snake was seen eating what was probably a beaver. 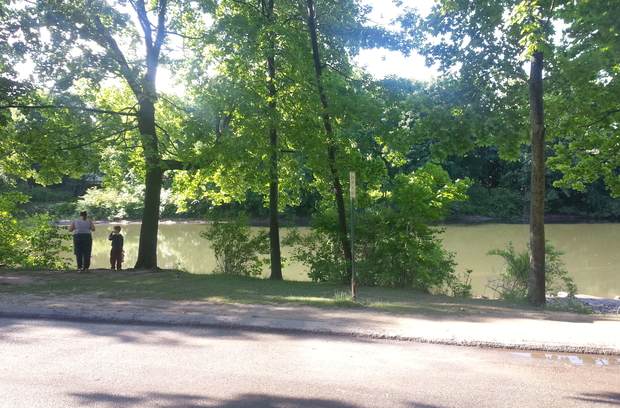 A woman keeps an eye on her son at Riverbank Park in Westbrook on Wednesday afternoon following the latest sighting of a large snake said to be on the loose in the area. 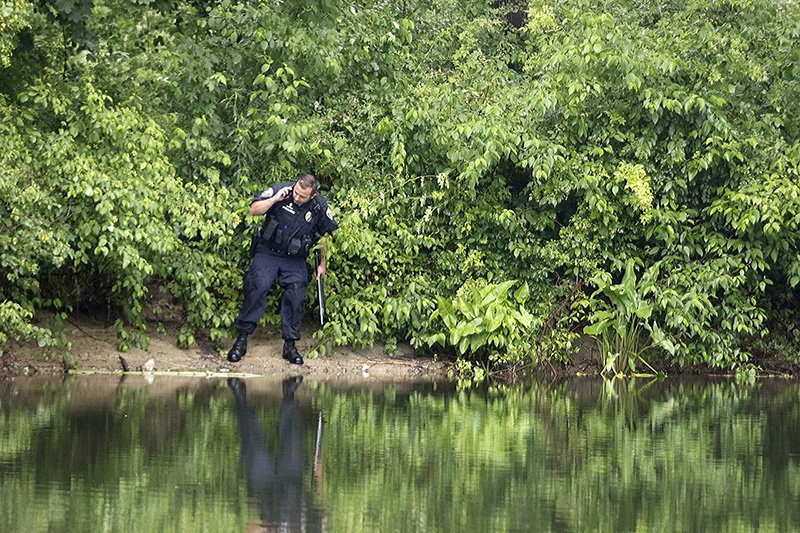 Officer Phil Robinson looks along the Presumpscot River in Westbrook after reports of a 10-foot-long snake seen eating a beaver.

Source: “Hunt for Wessie the snake becomes all-consuming on banks of river in Westbrook,” by Gilliam Graham, Portland Press-Herald, June 29, 2016. 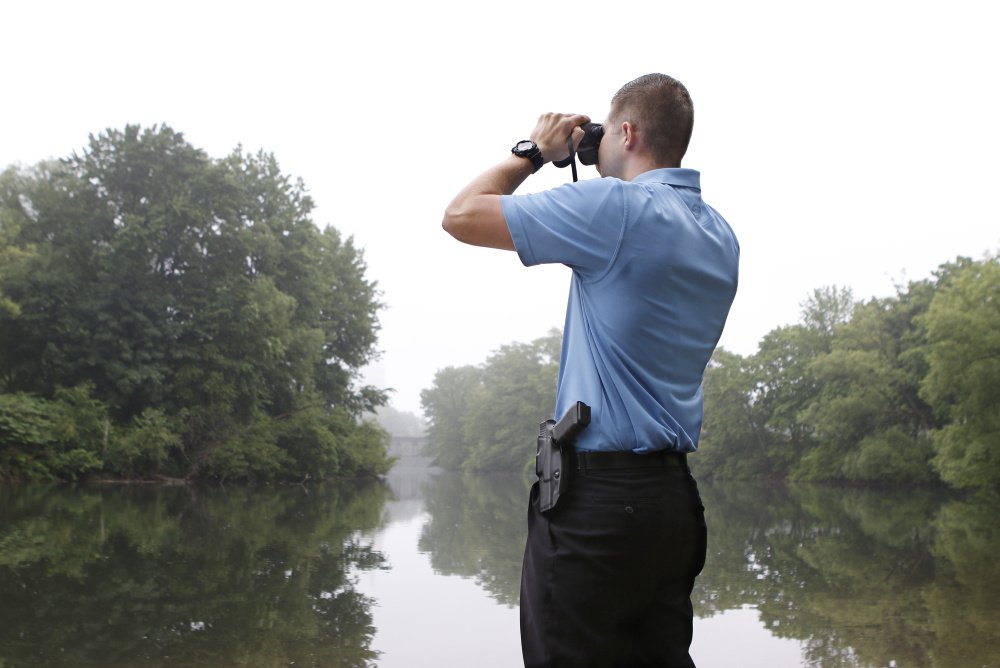 Joel Page/Staff Photographer
Police officer Garrett McCarthy scans the Presumpscot River’s banks in Westbrook on Wednesday, looking for a non-native species of snake believed to be lying dormant after eating a beaver. 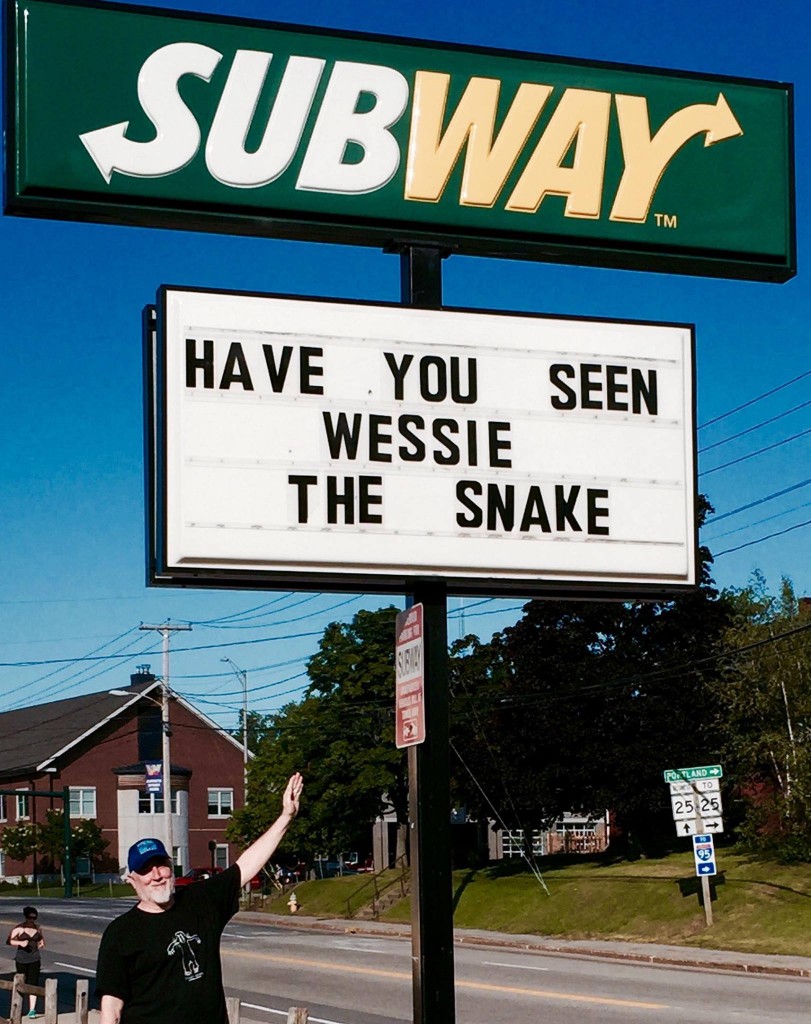 The International Cryptozoology Museum’s director and assistant director had to take their photos with the most obvious local signage denoting we were in Wessie country. 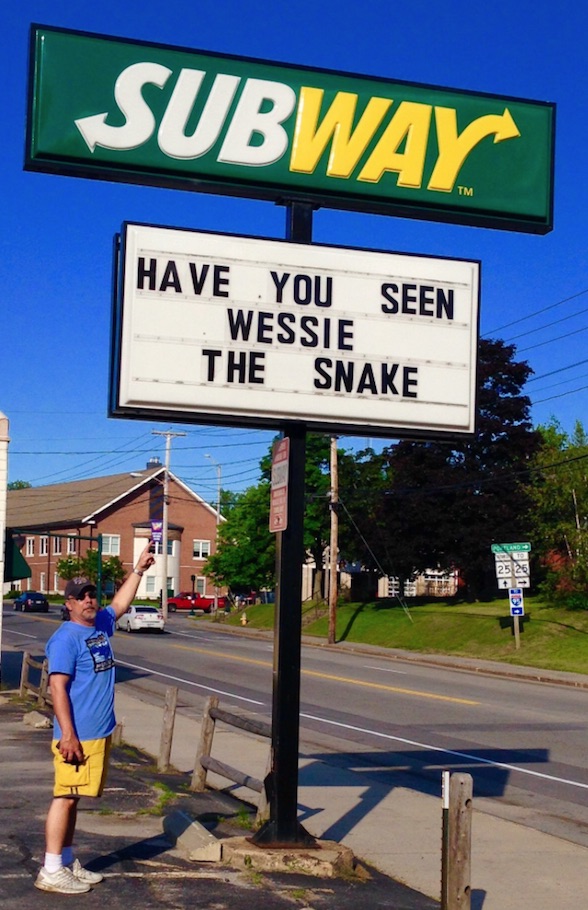 Some serious searching did occur, on site, on June 30, 2016, as we took a break from moving and re-curating the Museum. 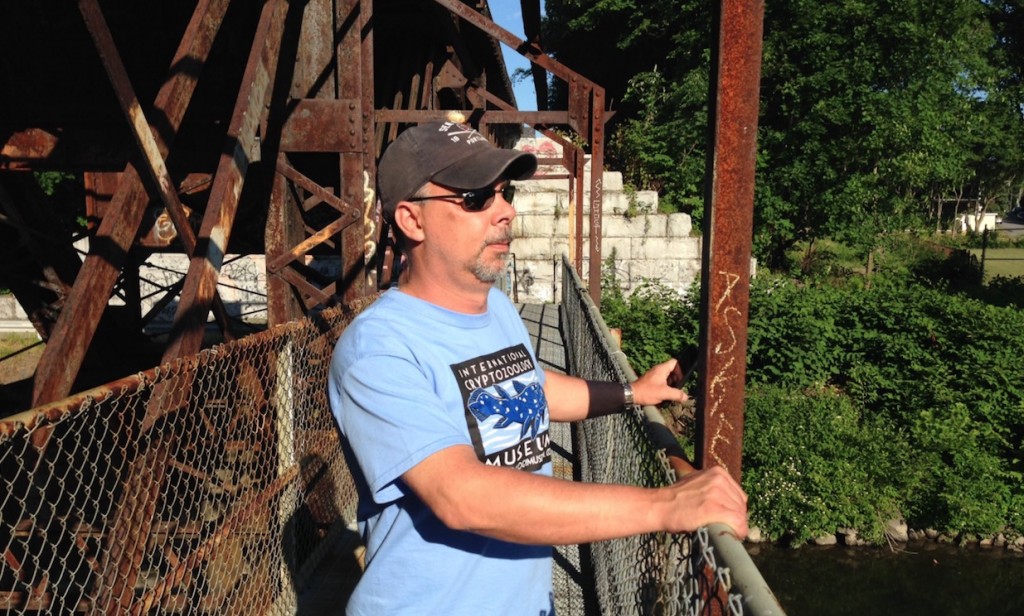 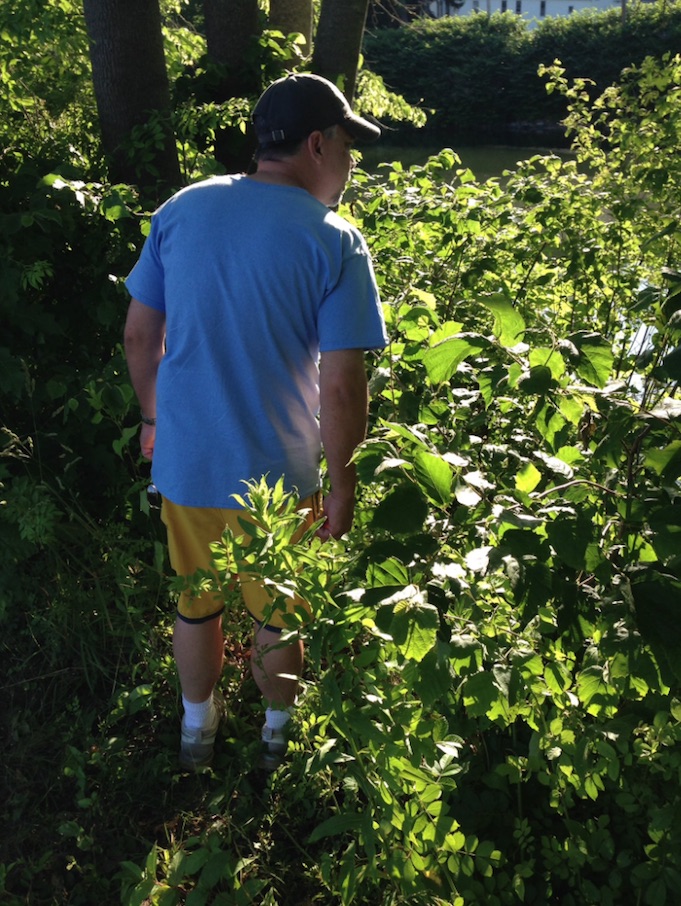 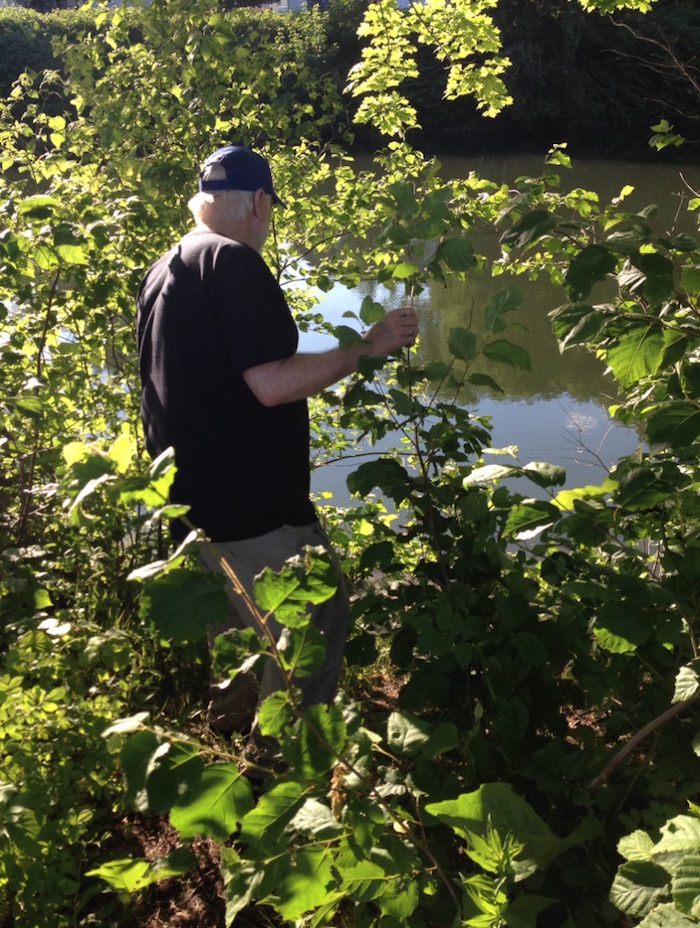 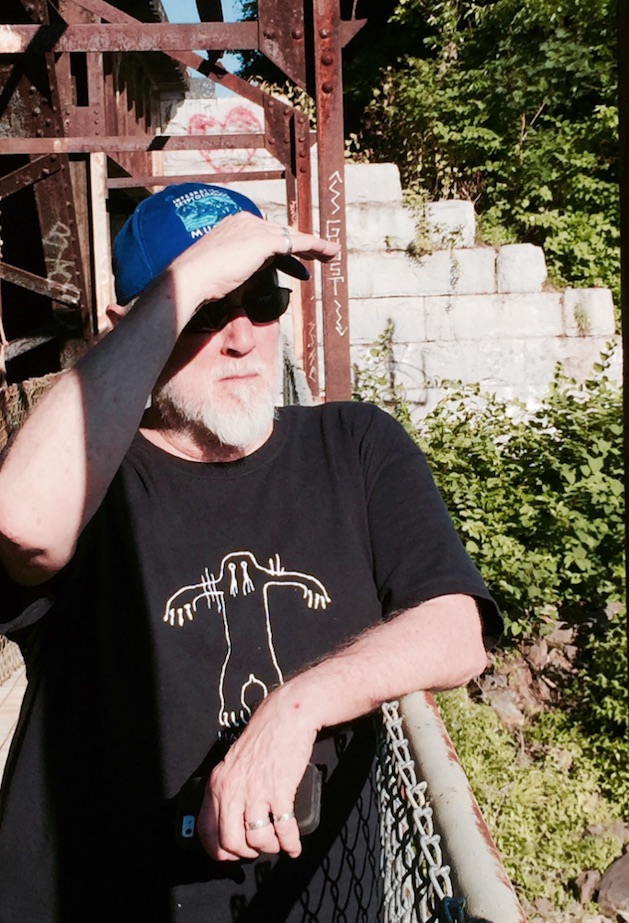 The press release from the Westbrook Police denotes the serious nature of these events. 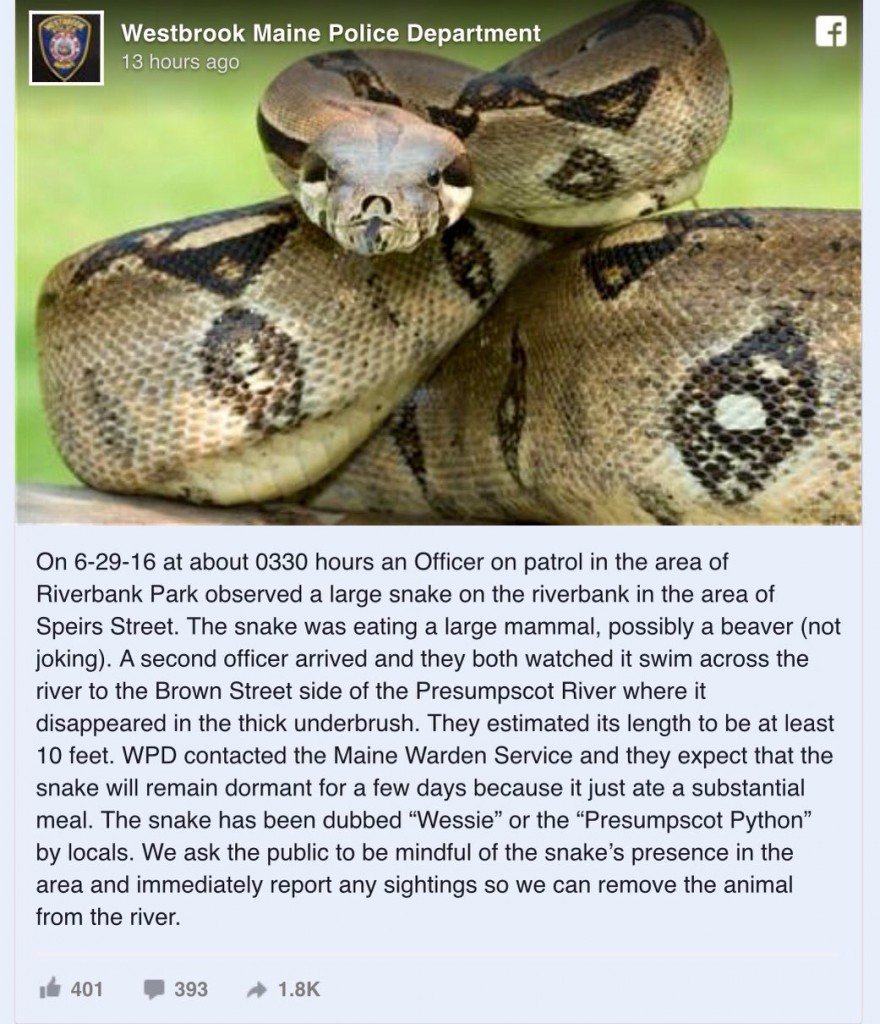 If the Westbrook Police obtain a dead or live specimen, we hope they consider the International Cryptozoology Museum as the logical location for a permanent display on this cryptid episode in Maine animal mysteries history.

While at the location of the sightings, we encountered a Channel 13 cameraman who was filing hourly live feeds from the river. He pointed out where the snake had been spotted to myself and Jeff Meuse. 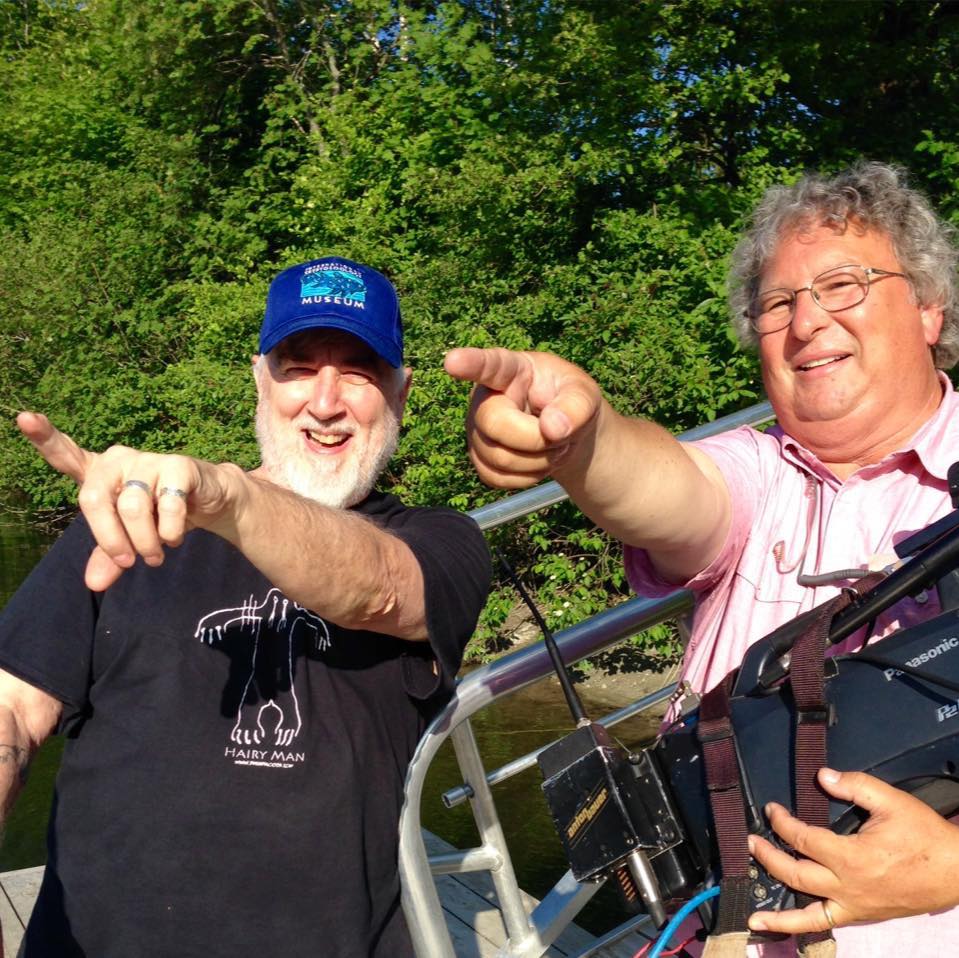 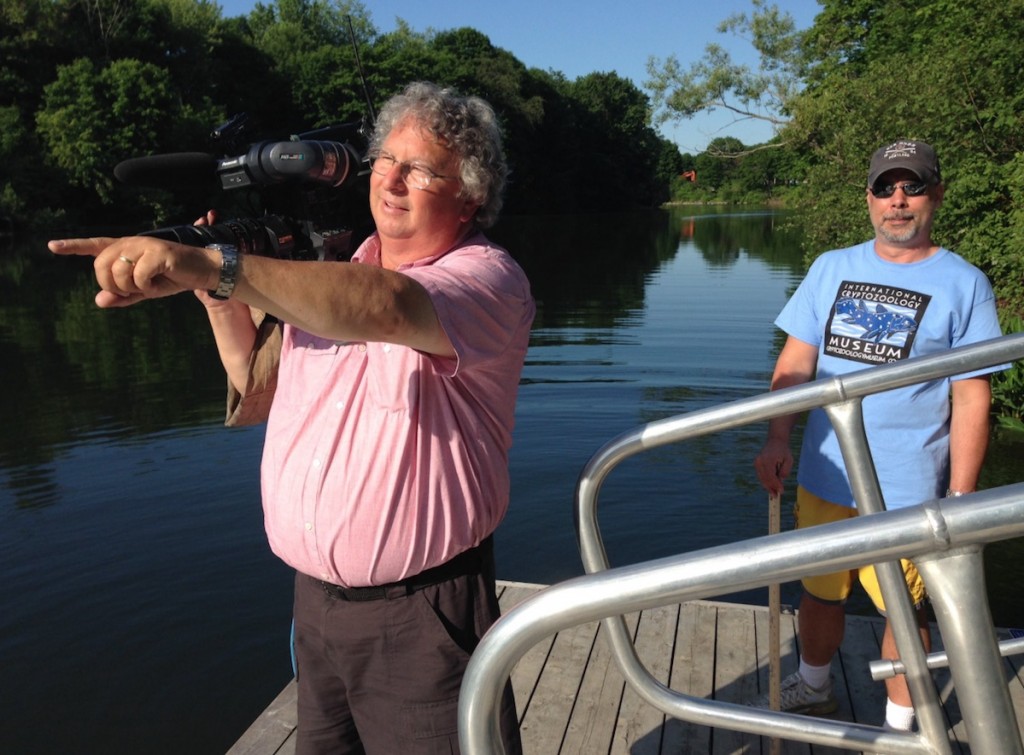 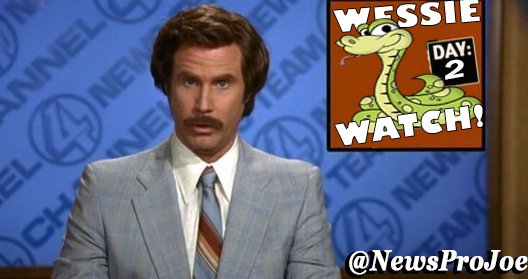 @NewsProJoe posted the above and below “popular cultural imagery,” as the Wessie mania took off. 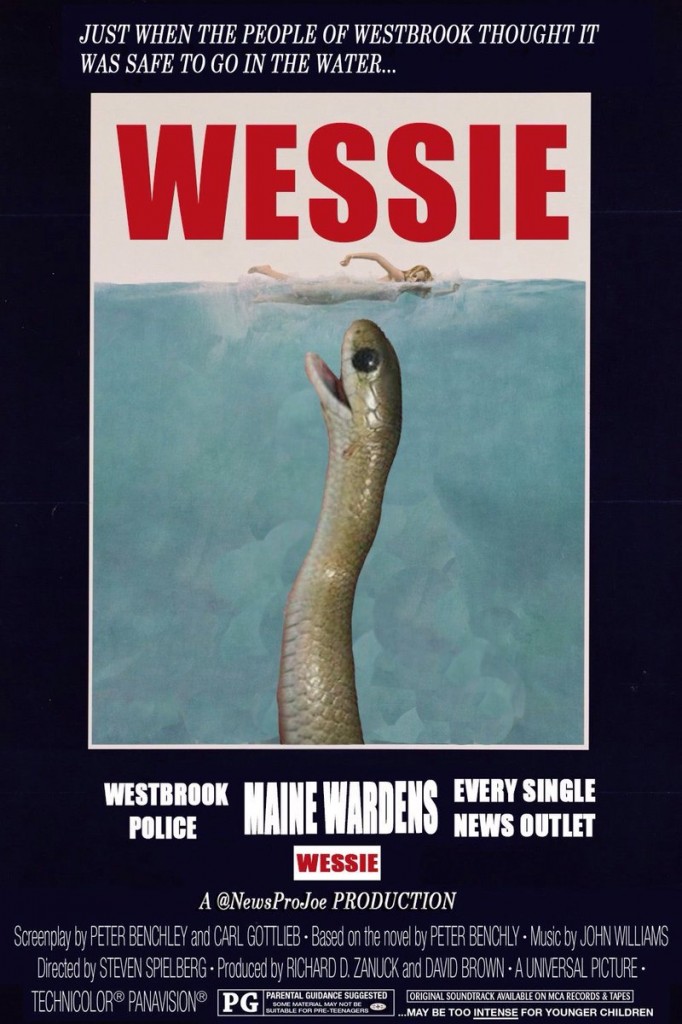 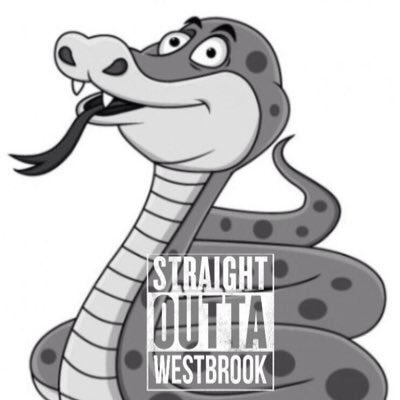 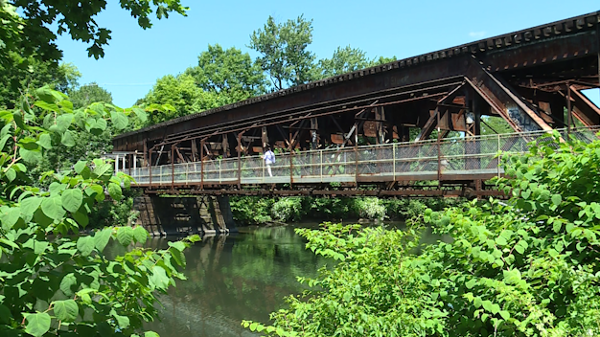 This Westbrook bridge is the most obvious landmark near where most of the sightings have centered. 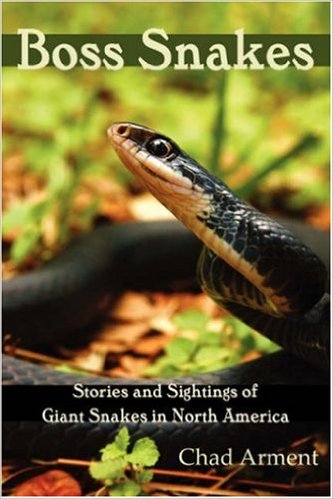 On page 182, Arment records the October 1878 sightings by the inhabitants of Winslow, Maine, on the banks of the Kennebeck River, of a large spotted snake, 8-to-10-feet long, with two smaller snakes with it. Mrs. Smiley, then Deacon Palmer, were among the eyewitnesses. Palmer felt for sure it was 10 feet long.

Then in August 1895, a man in Gardiner, near the Pickering farm on the Brunswick Road, said he saw a ten-feet-in-length giant snake.

(Check back for any updates.)

Come visit us at the new International Cryptozoology Museum location at Thompson’s Point, Portland, Maine, and discuss the latest on Wessie. 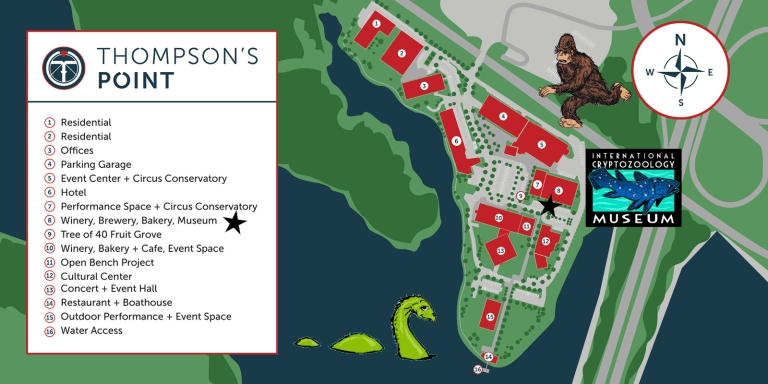 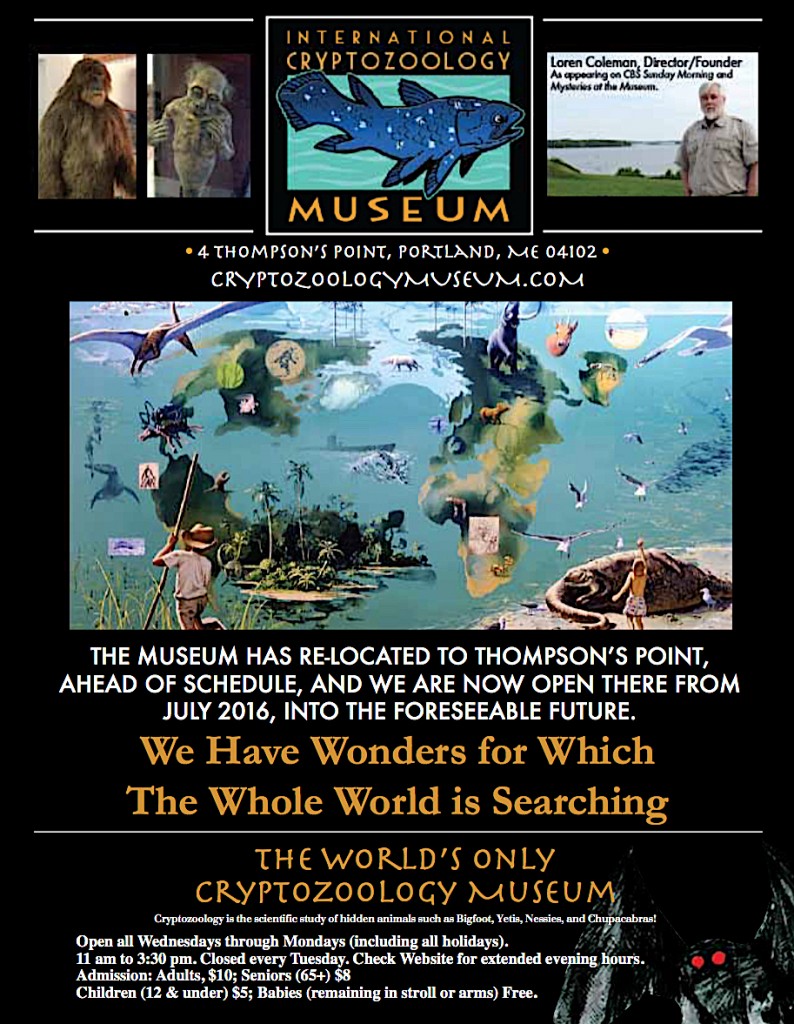 Look for our corrected, updated ad in the August issue of Portland Magazine.

For more info on the Museum, please click here.