You are here: Home / Bigfoot Commentator Verg Passes Away

Most individuals involved with Bigfoot matters are not media stars, book authors, or television personalities. Today, there are literally thousands of interested people around the globe, and specifically, in America, who would consider themselves “Bigfooters.” The majority of the more motivated general public in this realm are those reading Sasquatch forums, glancing at Bigfoot Facebook pages, and attending massive hairy hominoid conferences and gatherings.

I’ve learned, via an online announcement from Daniel Perez, that a friend of his and fellow Bigfoot enthusiast named Mark “Verg” Vergeront, in his 50s, died from heart failure on March 18, 2014. Verg, as he was known to many of his friends, students, and others, online and not, lived for his entire life in Riverside, California. 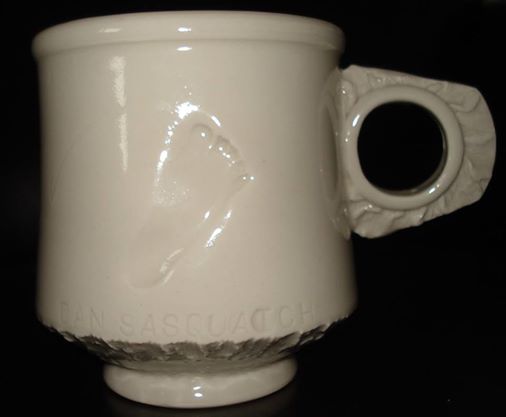 On Facebook, Perez publicly posted notice of Verg’s death and shared:  ”This is a ceramic cup he made for me a few years ago. It says ‘Dan Sasquatch.’ Now I have something to remember him by.”

Mark Vergeront was a fine arts teacher at the Riverside Poly High School (since 1989), an artist, a fisherman, an elk hunter, and an outdoorsman. He is survived by his mother Elaine Vergeront and brother, Mike Vergeront of Riverside, according to his official obituary:

MARK VERGERONT “VERG” Mark passed away Tuesday, March 18, 2014. He was a teacher, artist, fisherman, outdoor enthusiast and a lifetime resident of Riverside. He is survived by his mother Elaine Vergeront and brother, Mike Vergeront of Riverside. He was loved by many and will be missed by all who knew him.

Verg was a regular comment maker at Bigfoot and cryptozoology news sites and blogs. Steven Streufert of Bigfoot Books in Willow Creek, California, notes that Verg was a major supporter of The Bluff Creek Trail Camera Project.

A tip of our hat to one who connected and touched many lives. Would he have called himself a Bigfooter? Perhaps, perhaps not.