You are here: Home / Redfern On Giganto

Countless books have been written about Bigfoot, the Yeti, the Yowie and the Yeren. A significant number of words have been written about the massive, presumed-extinct, ancient ape known as Gigantopithecus. And, more than a few of those words suggest that the many and varied unknown man-beasts that are said to roam amongst us are examples of surviving, relic populations of that very same Gigantopithecus.

But what if something else, something even more fantastic in its implications than the idea that Bigfoot is Gigantopithecus, is actually afoot? That’s the scenario we are treated to in the new book from Mark A. Hall and Loren Coleman, True Giants: Is Gigantopithecus Still Alive?.

This is a book that, if you’re interested in Sasquatch and its hairy ilk, you’ll definitely want to read. It may not, however, be the book you’re anticipating or expecting. But, as I’ll demonstrate, that’s a very good thing.

The theory that Bigfoot, the Yeti, the Yowie (the list goes on) are indeed surviving pockets of Gigantopithecusis an attractive one. After all, at leastsome of the old stomping grounds of Gigantopithecus do broadly correspond to locales from where, today, we get reports of unknown, large apes. So, the theory does seem to make sense – at first glance.

The problem is that, for the most part, while Bigfoot and most of the rest of the hairy man-beasts among us are certainly big compared to the Human Race, they’re not that big. Creatures of 7-, 8-, or maybe 9-feet in height are typically what we hear of from those who are fortunate enough to encounter such animals.

But, just occasionally, a rare, rogue case will come along where the witness is certain that the creature they saw is far larger – maybe, rather astonishingly, in the region of 12-to-15 feet in height.

I’ve heard people say words to the effect of: “Well, sometimes, we see humans reaching 7- or 8-feet, so why shouldn’t there be a few over sized Bigfoot?” Fair enough, you might say. But, there’s another explanation too: we may be looking at different animals, rather than simply enormous versions of just one type. And, maybe those rare and rogue cases are not so rare and rogue after all! Cue True Giants.

So that there can be no misunderstanding of where they are coming from, Hall and Coleman note their position carefully, and early on, in the book: “These True Giants are not ‘Bigfoot,’ despite some efforts to make simple comparisons with creatures such as the one seen in the famous Roger Patterson-Robert Gimlin motion film of a Neo-Giant in California in 1967…They are of a different genus of primate.”

And it’s with respect to this different genus of primate that we get to learn so much about the truly massive Gigantopithecus in the pages of True Giants. The reader is treated to an excellent account of how Gigantopithecus came to be discovered and classified; its place in both zoology and cryptozoology; how and why the assumption has been made that it, Bigfoot and the Yeti are one and the same; and most importantly, why that assumption suffers from some major flaws.

And as the authors detail extensively and authoritatively in their book: a significant number of worldwide cultures tell of huge giants that once lived among us – the 12-15-foot-tall entities, and maybe a few taller ones, too. They were a marauding, violent breed, with cannibalistic tendencies, but who also seemed possessed of a certain degree of intelligence that allowed them to fashion a degree of clothing, crude tools, weapons, homes and dens (very often in caves or underground) and perhaps even primitive rafts and boats. 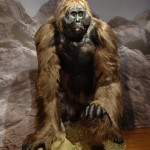 Of course, much of this flies in the face of accepted wisdom that Gigantopithecus, the True Giant, was just a huge ape. The theory that it could have been something more – something much more – is a controversial one. But it’s a theory that Hall and Coleman back up with a wealth of fascinating accounts from times past that encompass Asia, North America, Europe, South America and numerous other places, too. And, in doing so, the authors make a very good, thought-provoking case.

In fact, they are clear on the issue that dismissing Gigantopithecus as a gigantic ape is way off-track: “…the fossils that have been found for this particular giant primate have been attributed not to a giant man but, erroneously, to a giant ape…Some people have suggested that the fossils, known as Gigantopithecus, are gigantic men. We believe that view will one day be proven correct.”

And it’s with this viewpoint in mind that the pair provide us with some truly fascinating accounts that actually sit very well within just such a scenario. And it’s a point of view that provoked a lot of graphic imagery as I was reading the book.

Indeed, one of the things that really hit home upon digesting True Giants is how much of our own history we appear to have lost and forgotten – or that we have simply chosen to relegate to the realm of fantasy. Priceless tales of times long-past when gigantic beast-men roamed the world, perhaps competing with us for food, water, and a place to call home, fill the pages of this book.

But, numerous cases from the last couple of centuries and even up to the present day suggest that these huge, lumbering beast-men have not gone the way of the Dodo, but may still be found deep in the ancient forests, and the hard-to-access, huge mountain peaks that continue to dominate the wilder parts of our world.

In conclusion, True Giants is a book that is as groundbreaking as it is thought-provoking and paradigm-challenging. Hall and Coleman detail a remarkable theory – and a rich history, too – that serves to explain the many and varied accounts of huge, hairy giants in our midst. In the process of doing so, they weave a complex and fascinating story of something gigantic, something definitively monstrous but equally definitively man-like too, and something that has lived alongside us for so long, carefully shaping and sculpting our legends and folklore as it does so.

And, it’s very difficult to read True Giants and not come away with a deep sense of regret and loss, borne out of the probability that the full, fantastic history of these Goliath-like man-apes – and their ancient connections to, and interactions with, the Human Race – will likely never be known to us. However, unless or until we do learn more about not just the true nature of Gigantopithecus, but about our fog-shrouded history too, True Giants represents without doubt the best treatment we have thus far on this fascinating and engaging subject.