We were not alone.

Early reconstruction of the X-Woman.

Where she was found.

The X-Woman has been discussed before here, here, and here.

The news tonight is that three, er, four (with the Hobbits) fossil human-like beings existed, definitely, on Earth at the same time.

“The Neanderthal and Denisova population history may be roughly twice the length suggested in [the Nature] paper,” said University of Wisconsin — Madison anthropologist John Hawks, who was not involved with this study. “The ancestors [of the Denisovans] might be the original Homo erectus dispersal from Africa.” 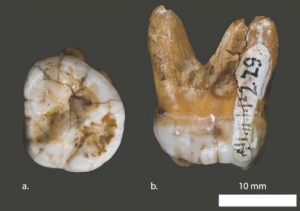 DNA taken from this belonging to a young girl was found to be neither from early human nor Neanderthal, and was from a previously unknown species.

The Denisovans were similar in looks to Homo erectus, pictured, a species which dies out more than one million years ago.