You are here: Home / Do the ‘Yeti’ and ‘Jackalope’ Really Exist?

Do the ‘Yeti’ and ‘Jackalope’ Really Exist?

Maine Public Broadcast Network aired a report on the International Cryptozoology Museum on July 7, 2014, and followed it with the attached article.  I am running the complete article here to note the spelling corrections that need to occur within the news item.
I appreciate the contribution from MPBN was done without ridicule and sarcastic humor, always a plus in a mainstream media treatment. The public radio network gave a fair overview of the scientific and public information mission of the International Cryptozoology Museum.
^^^^^
(UPDATE: I see that MPBN took my feedback and corrected the errors. The mistakes were relatively simple ones, like breaking up the word “Bigfoot” or merging “Loch Ness” into one word.  Still, there’s no reason not to get it right. Also, within cryptozoology, the proper way to spell unknown animals, cryptids, is by capitalizing them, with known animals being written in lower case. Thus “Bigfoot” has an upper case “B” and “bonobo,” a known great ape, has a lower case “b.”)
++++
Here is their article, with my earlier corrections in red and their originals in brackets.
<<<<<<>>>>> 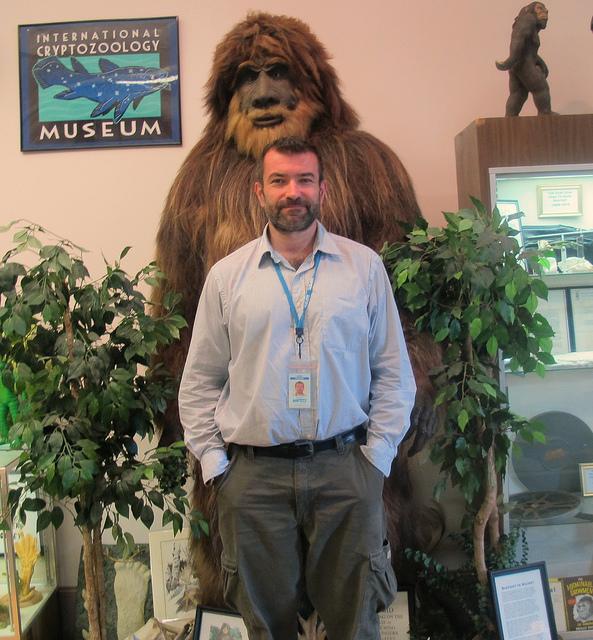 Tom Porter reports on a museum in Maine that preserves evidence of ‘hidden’ creatures.

The International Cryptozoology Museum is notable for many reasons. For one, it’s the largest museum of its kind in the world.

“It’s more than the biggest, it’s the only cryptozoology museum in the world,” says Loren Coleman, the director of the museum, which he opened just over 10 years ago. He is also an internationally recognized cryptozoologist.

“By ‘cryptozoology’ ['crypto-zoology'] we mean the study of hidden or unknown animals that may actually turn into new species,” Coleman says, “new animals or re-discovered animals that supposedly were extinct.”

The best known cryptids are the Loch Ness Monster [Lochness monster] in Scotland, the North American ape-like creature known as Bigfoot ["big foot,"] and his Asian cousin, the Yeti ["yeti"] – a.k.a., the Abominable Snowman [abominable snowman]. A significant portion of the museum’s 10,000 exhibits is dedicated to portrayals of these three creatures – including an 8-foot-tall model of Bigfoot [big foot].

Coleman’s interest in the subject started with a B-movie that he saw nearly 55 years ago.

Audio from movie trailer: “Half-Human is the fantastic motion picture search for the mountain creature of Asia whose name has become a symbol of terror and mystery, the Abominable Snowman. This is the claw that reaches out to kill.” (Screaming)

“When I saw a movie called ‘Half-Human‘ in 1960, I went to school the next day and asked my teachers, ‘So what is this about the abominable snowman?’ And they said, ‘They don’t exist, get back to your studies, leave me alone.’ So, you know, that juice in many, I needed – I was a curious young man, I read all the time.”

He devoured every book on the subject, and by the time he was 14, was corresponding with some 400 scientists and experts.

Over his career, Coleman has written 35 books on the subject and been on numerous expeditions in America and overseas. But In a lifetime of study and field work, he’s never actually laid eyes on a “cryptid,” as they’re called – few people have – but he’s interviewed hundreds of eye witness and seen a multitude of evidence.

In addition to its collection of foot casts, taxidermy and hair samples, the museum also explores the intersection between crytozoology and popular culture: There are movie posters, board games, cuddly toys and other trinkets inspired by cryptozoological myths.

Thanks to the influence of popular culture, says Coleman, there are many misconceptions out there about cryptids – including the Yeti [yeti] – which experts think may be a cross between a polar bear and a brown bear.

Loren Coleman: “Most Americans think that Yetis [yetis] are white, and that is really because of one cultural item, ‘Rudolph the Red-nosed Reindeer.’ Most of the native peoples, and myself and other scientists who have studied it, know that the yeti are reddish brown to black.

Tom Porter: “Do they have bad teeth?”

There are no yeti teeth on display here – but there are hair and fecal samples from an expedition in the 1950s. The yeti droppings, explains Coleman, were found to contain unknown parasite eggs that would match an unknown primate.

While Coleman clearly believes there are hidden species out there waiting to be discovered, he also says he’s a realist who knows the difference between hype and reality. “Most of these things that are brought to my attention are easily explained, and yes, I’m very skeptical.”

Indeed, the museum has a section devoted to famous hoaxes or mistakes:  Check out the jackalope – that’s the horned rabbit that supposedly terrorized the mountains of Wyoming in the 1930s; and not forgetting the Feejee [Fiji] mermaid, exhibited by P.T. Barnum in the 19th century. That was the product of some creative needlework, when the torso of a juvenile monkey was sewn onto the back half of a fish.

But Coleman says cryptozoology has also had some notable successes in discovering new species, or creatures thought to be extinct. Take, for example, the coelacanth  [ceolocanth], a prehistoric type of fish thought to be extinct, discovered alive and well in the 1930s.

“The coelacanth [ceolocanth] is actually our logo animal here at the museum,” Coleman says. “We actually have a cabinet at the International Cryptozoology Museum of what we call the animals of discovery. The okapi’s one of them, the giant panda, the mountain gorilla, the giant squid.”

Most recently, says Coleman, a new species of tapir – that’s a large pig-like creature with a prehensile snout – was discovered in Brazil just last year. But Coleman says this cryptid had actually been encountered many times before – and not just by native tribes.

“After this one was discovered, it was found that 100 years ago, Teddy Roosevelt shot one,” Coleman says, “and there’s one stuffed in a museum and nobody realized that it was a new species.”

As for the next great discovery, Colemen is excited by what might be lurking in the rainforests of western Indonesia. “The one that I think will shock anthropology and get people excited again is the Orang Pendek [orang pendek] in Sumatra.”

The Orang Pendek [orang pendek], he says, is a short ape-like creature covered in hair that walks upright, and has been consistently sighted by tribesmen, but has yet to be authenticated by scientists. Beyond that, Coleman expects as many as 25 new species to be discovered in the world’s oceans over the next 50 years.

And closer to home, there are numerous accounts of a black panther-type creature prowling the wilderness of Maine. 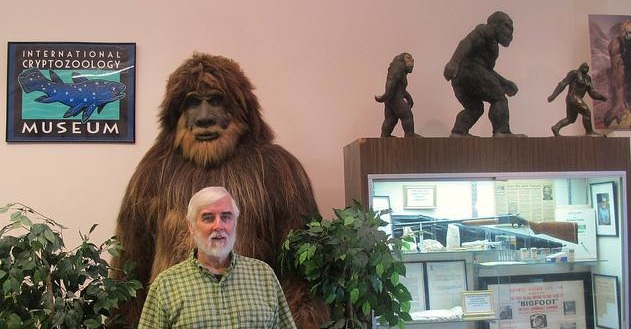 BTW, you should have a direct answer to the question, “Do the ‘Yeti’ and ‘Jackalope’ Really Exist?” 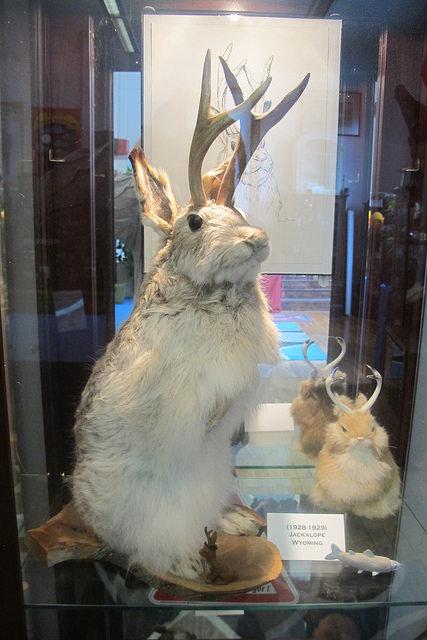 Here is how I see it.
The jackalope is a hoax. Through the fakes we shall know the realities that still remain hidden in the forests, mountains, and seas.
As to the Yetis, a wide variety of those are out there, perhaps.  One is labeled a “large Yeti” that is an ancient bear (thank you Dr. Sykes). Another appears to be a cultural Yeti that is another ball of enigmas.  And maybe a new pongid or hominoid is in the mix that remains to be confirmed, which has been termed a “man-sized” Yeti or others that shade into the Orang Pendek.
So do they really exist? In some sense, “yes” must be the considered response and that’s why the International Cryptozoology Museum has exhibits on Yetis and Jackalopes. They both have things to teach us about science and our world.
by Loren Coleman on July 8, 2014 in Abominable Snowman, Bigfoot, Breaking News, Cryptotourism, CryptoZoo News, Cryptozoologists, Cryptozoology, International Cryptozoology Museum, Media Appearances, Men in Cryptozoology, Movie Monsters, Museums, Orang Pendek, Pop Culture, Sasquatch, Skeptical Discussions, Yeti | Tagged Bigfoot, International Cryptozoology Museum, Jackalope, Loch Ness Monsters, Maine, Misspellings, MPBN, Radio, Radio Tours, Yeti
Previous Entry: Cryptozoology Gets Respect From Dr. Sykes and Reporters
Next Entry: This Week In Bigfoot History: July 11-18