Vance Orchard died March 7, 2006, in Walla Walla, Washington, after a cancer discovered just a week ago ended his Bigfoot hunting and reporting at the age of 88. Before Orchard died, he talked to me from October through December of last year, about how he wanted his “Bigfoot history,” as he called it, remembered. The following is Vance’s own view of his “Bigfoot” life, as he wished for it to be shared with the Bigfoot community after he died. – Loren 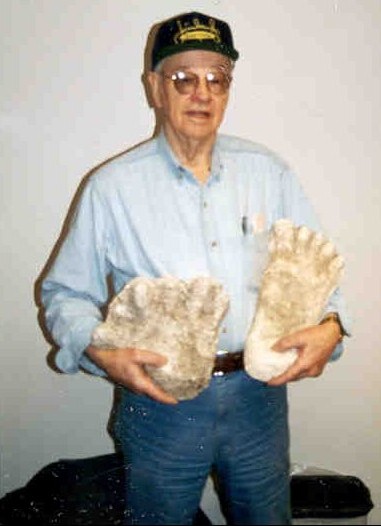 As Told to Loren Coleman

I was born in a small town near Colville, Washington State on December 26, 1917. I was a graduate in 1936 of Highline High School, Burien, Washington.

I started writing about the Northwest (but not Bigfoot) beginning in my high school newspaper. I followed the craft through weekly newspapers around Seattle-Tacoma until 1951 when I moved to Walla Walla to work for the Union-Bulletin as its Roving Reporter, covering 12 counties of SE Washington and NE Oregon. I retired in 1983 and continued to write for them until 1990, when I began writing a column with the Times of Waitsburg, Washington.

I really don’t know how many articles about Bigfoot that I have written for these two papers but I have been about the only one here writing about Bigfoot for decades.

It all started with a story in 1966 about big tracks seen near here. The 1966 Bigfoot tracks were reported by a motorcyclist riding the Tiger Canyon road which comes off the Blue Mountain peaks and joins the Mill Creek Road, a stream which runs through Walla Walla, en route to the Walla Walla River and thence to the Columbia River. Tracks were found on the Tiger Canyon Road about 15 air miles east of Walla Walla on the eastern boundary of the Mill Creek Watershed which straddles the Oregon-Washington boundary.

The story went to the Associated Press, and Roger Patterson saw the story and came over to Walla Walla to check it out. I spent most of two days with Roger, in the field and at my home and found him far from being some devious, perpetrator of nonsense that I have read in recent years. This was a year before the Bluff Creek film he shot, of course.

I wrote two books about Bigfoot, compilations largely of reports of sightings of Bigfoot in this area (Bigfoot of the Blues, 1993, and The Walla Walla Bigfoot, 2001).

My work in the Bigfoot field commenced with that time spent with Roger Patterson, and continued through the years, working in the field with Dr. Grover Krantz, Wes Sumerlin, Paul Freeman, Bill Laughery, Dr. Jeffrey Meldrum, Dr. Ron Brown, and others, often following several miles of Bigfoot tracks and other significant signs of their presence.

In the event you print something of my Bigfoot “history,” please add the name of Rene Dahinden to those with whom I have shared some field experiences. Rene came here following the first reports from Paul Freeman, and was here during some filming by TV crews. I believe from ABC’s “Good Morning America.”

Rene and I shared good rapport and exchanged several items of communication over the years. I split with him on some of his very strong views of U.S. scientists in general and one or two in particular but I liked the way he went at things in general. This view was especially true when he took the Patterson 1967 film to Russia for scientists there to examine. This, as you know, was done and an affirmative assessment of the film and what it portrayed was given. This is somewhat forgotten, it seems in light of what we read of so much, the recent bogus claims by people who say they performed in monkey suits.

Vance Orchard chronicled Paul Freeman‘s quest as compelling, and discussed what Freeman found in the way of Bigfoot tracks and other evidence often. He is shown above holding Freeman’s casts.

Vance’s longtime friend Joe Beelart has observed: “Vance always had great faith in the early work of Paul Freeman and was a dedicated friend of Paul.”