What and where are your favorite cryptozoology and Bigfoot museums throughout the world?

Scotland’s cryptozoology collection at the National Museums of Scotland was recently highlighted in the Scotsman. The easiest exhibits to record, unfortunately, are often the hoaxes. Shown here are a Japanese-made mermaid and a Canadian-created furred trout, both taxidermy fakes.

Dr. Geoff Swinney (below), Curator of Lower Vertebrates, Fish, Amphibians and Reptiles, National Museums of Scotland, examines the vertebrae of the Beast of Stronsay, from the carcass of the beast found on an Orkney island beach in 1808. Swinney, who is the resident cryptozoologist, in 1987, confirmed the vertebrae was from a basking shark, and not a Sea Serpent.

Meanwhile, new museums are being founded with an eye to a speciality linked to one specific cryptid. Take, for example, the successful Mothman Museum in Point Pleasant, West Virginia, created after the Mark Pellington movie, The Mothman Prophecies, was released in 2002.

Above: Mothman Museum director Jeff Wamsley holds his most recent book, Mothman: Behind the Red Eyes. With him is museum co-worker Todd Wiseman, an Ohio University film student making a documentary about Mothman.

Below: Artist John Frick of Cumberland, Maryland, stands under his creation, a Mothman replica that hangs from the ceiling of the Mothman Museum in Point Pleasant, West Virginia.

The International Cryptozoology Museum of Portland, Maine, has a more generalist theme with a wide focus. 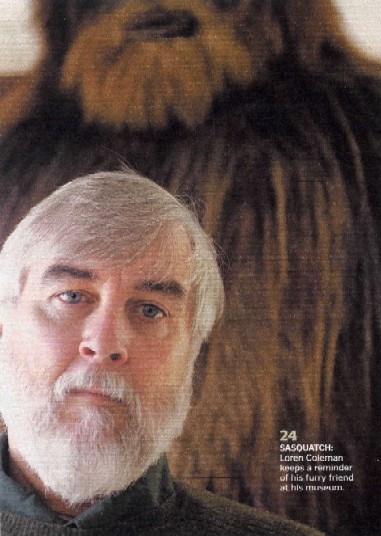 The International Cryptozoology Museum’s collection includes over 150 Bigfoot, Yeti, and Yowie footprint casts, the hair of the Yeti, museum quality skull replicas (from Homo floresiensis to Gigantopithecus), movie props (from Harry and the Hendersons to The Mothman Prophecies), cryptid figurines from 46 years of collecting, the eight-and-half-feet-tall Crookston Bigfoot, a full-scale coelacanth, the Feejee Mermaid from the movie P. T. Barnum, expedition equipment (e.g. from Hillary’s 1960 Abominable Snowman hunt, the 1984 Crypto-Quest for Idaho’s Paddler, the 2000 Skookum cast discovery trek), and much, much more.

Needless to say, as in Scotland, the International Cryptozoology Museum has modern versions (see below) of the Feejee mermaid, the furred trout, and jackalopes.

What cryptozoology and Bigfoot museums would you recommend to other Cryptomundo readers from your journeys and readings?