Andy Nunez passed this photo on to me, by saying, “This is for Loren Coleman and Bruce Costello. Not sure where this came from, but it looks cool, whether real or fake.”

On Thursday, December 6, 2012 at 5:40pm, Michael Dwayne Rogers of Chasing Trophy Whitetails posted the above photograph on Facebook. Almost 3000 people “liked” it, 4.5K “shares” occurred, and 4.6K comments were made. Here’s what Rogers wrote:
“This is one of several pics that my buddy got on his game camera back in November. It came by on November 11 and then again on November 18. Has anyone else seen anything like this before?”

Where it was taken is unclear. I must admit, however, I have not read all of the 4,600 comments. We may be entering a period where anything that is even vaguely presented as a Bigfoot photo now receives too much attention. Such is the state of these times.

My hope is that an increase in the learning curve in critical thinking will be the result.

Remember, the best cryptozoologist is a skeptical one. 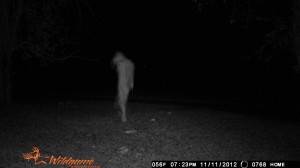