You are here: Home / Trunko: Imagined, Imaged, and Investigated

Alexis Rockman’s head detail of Trunko, from his Map of Cryptozoology.

Has the mystery of Trunko been solved? Karl Shuker certainly feels with the discovery of a photograph of the mysterious carcass, part of the solution is closer to being affirmed.

First, let me share some Trunko basics, background, and visuals.

Trunko is Karl Shuker’s name for an animal allegedly sighted at Margate, South Africa, on October 25, 1924, according to an article entitled “Fish Like A Polar Bear,” published in the December 27, 1924, edition of London’s Daily Mail.

The animal was reportedly first seen off the coast battling two killer whales or orcas, which fought the unusual creature for three hours. It used its tail to attack the whales and was said to have lifted itself out of the water by about 20 feet. One of the witnesses, Hugh Ballance, described the animal as looking like a “giant polar bear,” during a final fight. 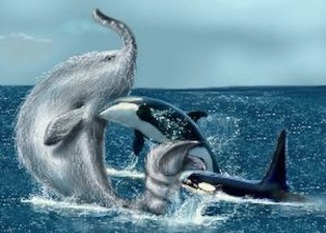 Artist Bill Asmussen’s depiction of Trunko being mauled by orcas.

The creature then washed ashore on Margate Beach but despite being there for 10 days, no scientist ever investigated the carcass while it was beached. No reliable description has been published, and no photographs of it have ever been published, until now. Various descriptions talked of its snowy-white fur, an elephantine trunk, a lobster-like tail, and a carcass devoid of blood.

The animal was said to be 47 feet long, 10 feet wide, and 5 feet high, with the head said to have been replaced, actually, by a trunk that was 5 feet long and 14 inches in diameter. That’s why this was coined “Trunko,” by cryptozoologist Karl Shuker. The tail reportedly was 10 feet, and the fur was 8 inches long.

The creature’s corpse spent 10 days on the Margate beach, until the sea finally reclaimed the carcass.

In the March 27, 1925 edition of the Charleroi Mail, in Charleroi, Pennsylvania, an article entitled “Whales Slain By Hairy Monster” reported that the whales in the Margate incident were killed by a strange creature which was washed up on a beach exhausted and fell unconscious, but made its way back into the ocean and swam away after 10 days. (That seems rather fanciful and full of added journalistic fiction.) 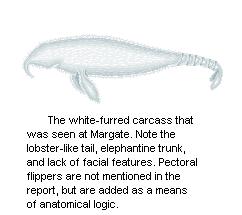 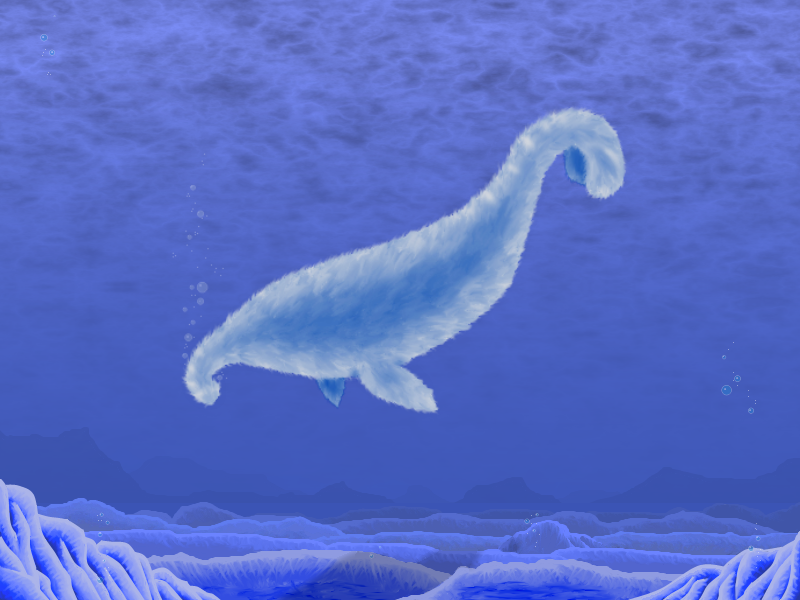 Two images of Trunko above are the Kryptid’s Keep art by Lance Bradshaw.

Alexis Rockman’s extended detail of Trunko, from his Map of Cryptozoology. 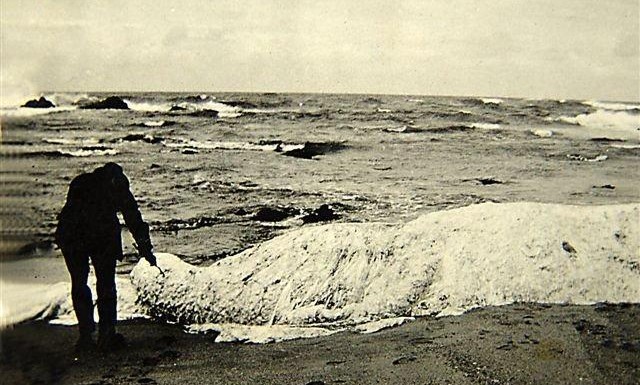 Karl writes in his blog: “German correspondent Markus Hemmler emailed me with some remarkable news. He had discovered a website containing an allegedly genuine photograph of Trunko – a monicker, incidentally, that I had somewhat lightheartedly given to Margate’s mystery sea monster in my book The Unexplained (1996) but which, to my great surprise, has since become its accepted name. Moreover, the photograph had been snapped by none other than Mr A.C. Jones of Johannesburg – the correspondent and photographer for an article on this entity that had been published in the Rand Daily Mail and also in Wide World Magazine way back in July 1925, thus providing a promising air of authenticity to the image.”

Karl Shuker’s reconfirms here his early findings of what he thinks this is, the carcass of a decaying whale, due to this photograph. Karl notes: “The appearance of Trunko’s remains in this photograph reaffirms my opinion – first presented in my book Extraordinary Animals Revisited (CFZ Press: Bideford, 2007)…that it was a globster, not a bona fide cryptid.”

Globster, giant octopus, decaying whale. The level of interactive explanations can be confusing.

Also, there are the points to be considered about that reported white fur, seen before the animal was dead, when it was fighting with the killer whales.

Karl picks up from discussions by Lance Bradshaw at his Kryptid’s Keep website, referenced above, this, “If Ballance’s testimony is to be believed, Trunko bore its snowy fur while it was still very much alive, battling the whales. If this is true, then clearly its fur cannot be explained away as exposed connective fibres. Moreover, it also suggests that Trunko was mammalian, albeit wholly unlike any mammal previously recorded by science.”

What was Trunko, after all?