You are here: Home / The Top Cryptofiction Books of 2005

Coauthor of The Field Guide to Lake Monsters, Sea Serpents, and Other Mystery Denizens of the Deep and Creatures of the Outer Edge.

What are the best and most interesting new works of fiction that have become near and dear to the hearts of those in pursuit of unknown and hidden animals for the last twelve months?

If you are looking for “The Top Cryptozoology Stories of 2005,” please click here.

Five completely different cryptozoology-influenced novels (often called "cryptofiction" among their authors and fans) gain praiseworthy recognition for the Year of 2005. Their publishing debuts demonstrate how cryptozoology is oozing into all segments of popular culture. The following rankings are not given in any specific order, as these works are so different that they occupy their own habitats. Indeed, all are multiple winners as my #1 pick for the top cryptofiction work of 2005. Here’s my list:

The first "best of" choice is a pure example of cryptofiction, a fast-paced novel employing cryptozoology as its main theme. This huge novel, at 487 pages, is Steve Alten’s The Loch. Alten’s latest work is spellbinding and enchanting, zoologically engaging and mysteriously alluring. Getting there is half the fun. Enjoy Alten’s hunt for Nessie.

Cryptid: The Lost Legacy of Lewis and Clark

Next, Eric Penz’s Cryptid: The Lost Legacy of Lewis and Clark deals with an entertaining historical notion that there is a cryptozoological secret for the ages to be found within the lost journals of the explorers sent out by Thomas Jefferson. Reading Penz’s novel you will discover he has written a micro-textbook on Gigantopithecus within the middle of his Cryptid.

Looking for Bigfoot: A New Novel for America

In the new arena of cryptozoologically-inspired political novels is Mike Palecek’s Looking for Bigfoot: A New Novel for America. The author’s underlying meaning for his "search" is clear. "Nobody believes in UFOs or the grassy knoll or Bigfoot because…because the state, the television, Diane Sawyer…have programmed us to laugh at those things and the people who believe in them," writes Palecek. "I can change it. I can change this country! I will find Bigfoot, and that will begin the unraveling of all the secrets of this cheesy nation." Some people won’t like this book, but that’s not the point here. It has been written, and that, philosophically and politically, speaks volumes.

Professor Wexler, World Explorer: A Field Guide to Gods and Cryptids of the Outer Edge 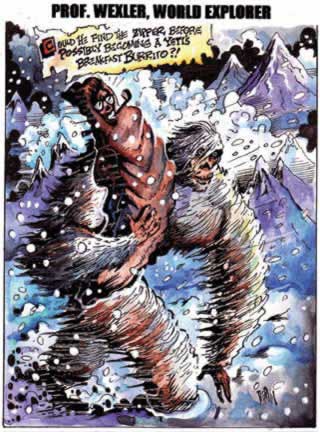 As the year was winding down, I received a large format book that I have to pick as my surprise winner for the year. One of the funniest collections of previously published cartoon panels and new humorous stories, all filled with incredibly on-target cryptozoo-references, is Charles Berlin’s Professor Wexler, World Explorer: A Field Guide to Gods and Cryptids of the Outer Edge (with an introduction by David Hatcher Childress). Berlin is aware of the detailed facets of the cryptozoological literature (even the Dover Demon makes an appearance), and uses his knowledge with liberal pun-filled abandon in his cartoons. Charles Berlin is just plain wicked hilarious.

Finally, last but not least, you have to delight in the comedic efforts of writer Allan Gross and artist Jerry Carr. In their first graphic novel, Cryptozoo Crew #1, and their three 2005 comic books, including my favorite, Cryptozoo Crew, comic book #2, Gross and Carr have lots of fun. 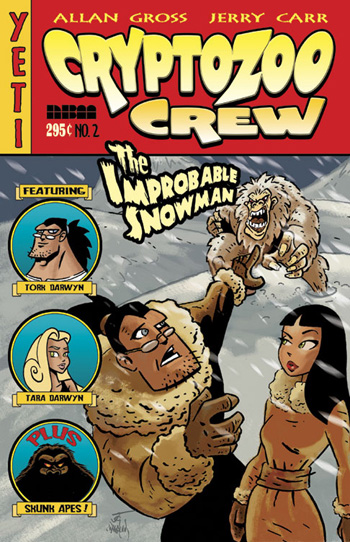 In comic book #2, containing the stories, "The Improbable Snowman" and "Beneath the City of the Skunk Apes," cryptozoologist Tork Darwyn and his wife Tara travel to Tibet in search of one of cryptozoology’s big three, and to Florida to investigate more cryptids. Even though Tork’s creators tell me the lead-character is based on yours truly, I sure hope I’m not that much of a dingbat. As critic Rick Tate noted about issue #2, which he called a "clever, little romp," in Ring of Fire Reviews: "For a scientist, Tork is mighty dense…His twisting of Darwinian theory printed at the end of the book truly leaves one speechless." Cryptozoo Crew shows us that cryptozoology and cryptozoologists have retained our sense of humor for one more year. Thank goodness.

Books have to be received to be reviewed in Cryptomundo’s CryptoZoo News, and, of course, received to be placed on the Top Cryptofiction Books for 2006. Please send your review copies to Loren Coleman, Post Office Box 360, Portland, ME 04112 USA, for future consideration. Thank you.