You are here: Home / The Top Ten Cryptozoology Stories of 2019

The Top Ten Cryptozoology Stories of 2019 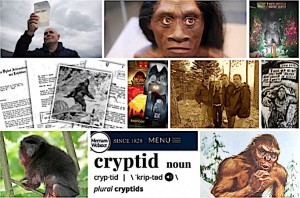 In the 1940s, the Scottish-born zoologist Ivan T. Sanderson began using a word he coined, “cryptozoology,” to describe a new subdiscipline of zoology that studied hidden, as yet-to-be-discovered large animals. Fieldworkers and authors previously had used the phrase, “romantic zoology.” In the late 1950s, after a decade of correspondence with Sanderson, Belgian zoologist Bernard Heuvelmans began formalizing “cryptozoology.”

Today, Sanderson’s and Heuvelmans’ precise approaches to the passion and patience of the field has grown into a more scientifically-aware cryptozoology, resulting in 21st century establishment of the International Cryptozoology Museum, journals, conferences, and other speciality museums. A history is being written about cryptozoology, as it grows older, year to year.

The Year of 2019 foreshadows the New Year of 2020, but first we must archive this decade’s highlights of old news. This overview of cryptozoological events, we shall share the highpoints and discoveries that made the year memorable.

The Top Ten Cryptozoology Stories of 2019 are: 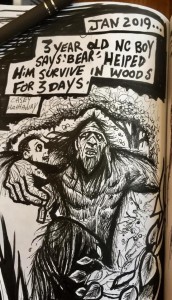 The biggest Bigfoot story of 2019 was the mystery surrounding the missing days in the life of  Casey Hathaway, 3, of Emul, North Carolina. He disappeared while playing near his grandmother’s home with friends, and was found after spending two days lost in the woods. He told his family he had “hung out with a bear.” Speculation on the internet quickly jumped to wondering if Casey had misidentified a Bigfoot as a bear. For the complete story, see “Top Cryptozoology Story of 2019: A Boy, A Bear, and A Bigfoot In The Woods.”

As important as the find of the Flores “hobbit,” Homo floresiensis, in 2003, the Year 2019 saw Nature’s announcement of the discovery of Homo luzonensis in the Philippines. The small-bodied hominin lived on the island of Luzon at least 50,000 to 67,000 years ago. The hominin—identified from a total of seven teeth and six small bones—hosts a patchwork of ancient and more advanced features. See more here and here. See also “Denisovans in Tibet.”

#3. The FBI File on Bigfoot Released 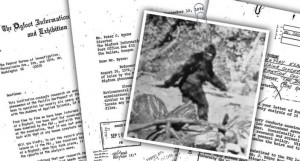 One of the big stories of the year was one revealed from the past.

In 1976, Peter Byrne, the director of the Bigfoot Information Center and Exhibition in The Dalles, Oregon, sent the FBI “about 15 hairs attached to a tiny piece of skin.” Byrne wrote that his organization couldn’t identify what kind of animal it came from, and was hoping the FBI might analyze it. He also wanted to know if the FBI had analyzed suspected Bigfoot hair before; and if so, what the bureau’s conclusion was. In 1977, the FBI sent back the hair samples, noting the “hairs are of deer family origin.” But Byrne was in Nepal, apparently never was properly informed of the correspondence, and it was not until June of 2019 until the file was released.

The full story and it’s side trip into bits of information can be found here: “Spies in the Shadows and the FBI’s Bigfoot File.”

#4. Another “Goat Man” Death on the Tracks 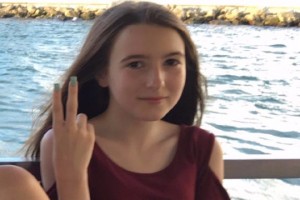 On May 26, 2019, Savanna Bright, 15, died after being hit by a Norfolk Southern train on Sunday night, on the train tracks near the Pope Lick trestle, while searching for the Pope Lick Goat Man. See “Was The Pope Lick Goatman Responsible?“ See also “The Top Cryptozoology Obituaries of 2019.” 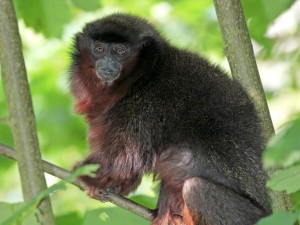 In December 2019, news that a new species of monkey found in the Amazon rainforest, Plecturocebus parecis, had been mis-categorized for more than 100 years, joined news of other new species found in 2019. Several of these finds have made it a remarkable year, including those of the new tiny squid Euprymna brenneri, the rainbow lorikeet being split into six species, three new geckos from Queensland, and more, as well as the rediscovery of such animals as the once-thought-extinct (since 1990) silver-backed chevrotain, also known as the Chinese water deer or Vampire deer. See here.
#6. Cliff Barackman’s New Bigfoot Museum 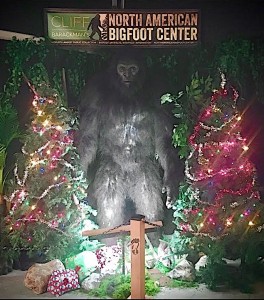 The Animal Planet series Finding Bigfoot, which premiered in 2011, had its series finale and the 100th episode on May 27, 2018. During 2019, Cliff Barackman, one of the original Finding Bigfoot hosts, opened his museum, the North American Bigfoot Center on US-26, Boring, Oregon, just down the road from Mount Hood, in October 2019. Following the lead of his life’s work in education and Bigfoot students, and learning from the International Cryptozoology Museum and the Willow Creek-China Flats (Bigfoot) Museum. See here.
#7. More Documentary Films Appear 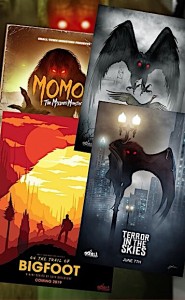 Seth Breedlove, as the director, through Small Town Monsters, has produced unique documentaries at an every increasing pace. In 2019, he gave us Momo: The Missouri Monster, Terror in the Skies, and On the Trail of Bigfoot. See more.
#8. Expedition Bigfoot Begins 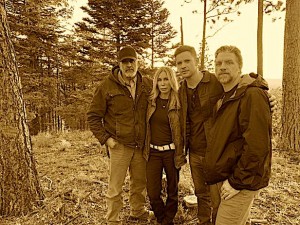 In the wake of the ashes of other Sasquatch programming possibilities, which went nowhere, a new program began in 2019: Expedition Bigfoot. “Travel Channel has assembled the very best team of experts in Bigfoot lore and science to give us proof of the creature’s existence once and for all,” said Matthew Butler, general manager, Travel Channel. The team includes Bryce Johnson (Expedition Operations); Dr. Mireya Mayor (Primatologist); Russell Acord (Ex-Military/Survivalist); Ronny LeBlanc (Bigfoot Researcher); and Ryan “RPG” Golembeske (Bigfoot Investigator). See more.
#9. DNA and the Loch Ness Monsters 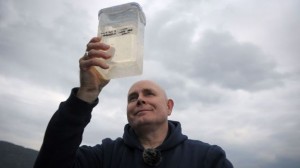 A multi-site, multi-month survey of the waters of Loch Ness for what might account for the reported Monsters ended in 2019. Researchers from New Zealand tried to catalogue all living species in the loch by extracting DNA from water samples. Following analysis, the scientists ruled out the presence of the usual suspects said to be behind reports of the monsters. Professor Neil Gemmell found evidence, however, of “a very significant amount of eel DNA. Eels are very plentiful in Loch Ness, with eel DNA found at pretty much every location sampled – there are a lot of them. So – are they giant eels? Well, our data doesn’t reveal their size, but the sheer quantity of the material says that we can’t discount the possibility that there may be giant eels in Loch Ness. Therefore we can’t discount the possibility that what people see and believe is the Loch Ness Monster might be a giant eel, ” he told the BBC News. See here. 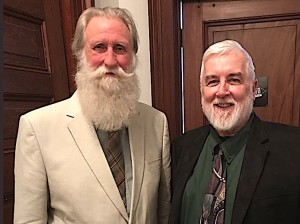 Adrian Shine and Loren Coleman appeared on the documentary about the Loch Ness DNA results.
#10. “Cryptid” Added to Merriam-Webster Dictionary 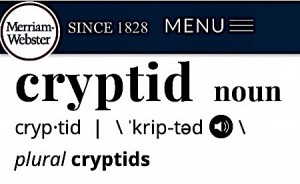 Thirty-six years after the term was coined, a foundation word in cryptozoology reached a milestone. On 4/22/2019, the Merriam-Webster editors added 640 new words to their latest dictionary, the company told CBS Chicago. One of those new words is “cryptid,” which they announced by being a bit punny about it: “After years of searching for and collecting evidence, we put ‘cryptid’ in the dictionary.” See here. 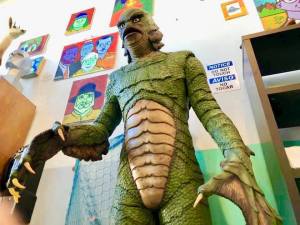 News from the International Cryptozoology Museum: During 2019, the Portland, Maine-based “world’s only cryptozoology institution” added new banks of display cases on the first and second floors, a new vintage model of the Gill-Man from Universal Studios from The Creature From The Black Lagoon, new taxidermy items demonstrating species candidates of “black panthers,” dioramas of Bigfoot/Yeti encounters, and a redesigned, modernized gift store was installed. Jean Tewksbury, the Museum’s new operations curator, began giving lectures to out-of-state Bigfoot groups. The Museum also is re-energizing it’s GoFundMe appeal for its 2020 exhibition. 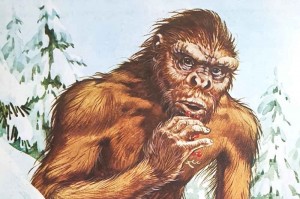 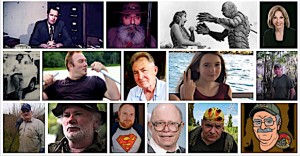 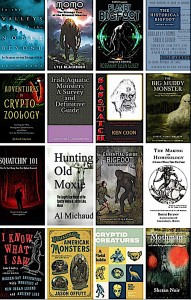 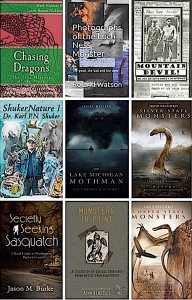