You are here: Home / Spies in the Shadows and the FBI’s Bigfoot File

Spies in the Shadows and the FBI’s Bigfoot File 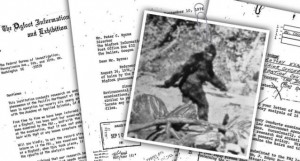 The media storm all began with a message via Twitter. The FBI Records Vault sent out a tweet at 1:00 PM on June 5, 2019. It was simple enough. It had one single word: Bigfoot. And a link.

That link revealed 22 (or 23, in some reportage) pages of documents that included letters between Peter Byrne’s The Bigfoot Information Center and Exhibition and the FBI Lab, plus paper clippings of Bigfoot sightings and related phenomena.

The letters outline inquiries from Byrne and his Center, which was said to study “the Bigfoot phenomenon of the Pacific Northwest of the USA,” whether or not the FBI Lab was analyzing an unidentified hair and tissue sample and whether or not it was linked to any other known species.

Letters from Peter Byrne talk of ”a sample of reputed Sasquatch hair was analyzed by the FBI and found to belong to no known animal.” 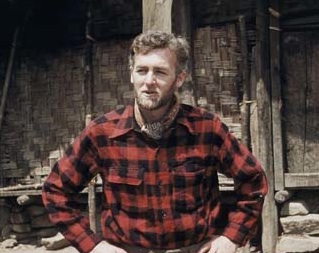 The documents released outline how multiple people had reached out to the FBI after this article but the FBI were, “unable to locate any references to such examinations.” 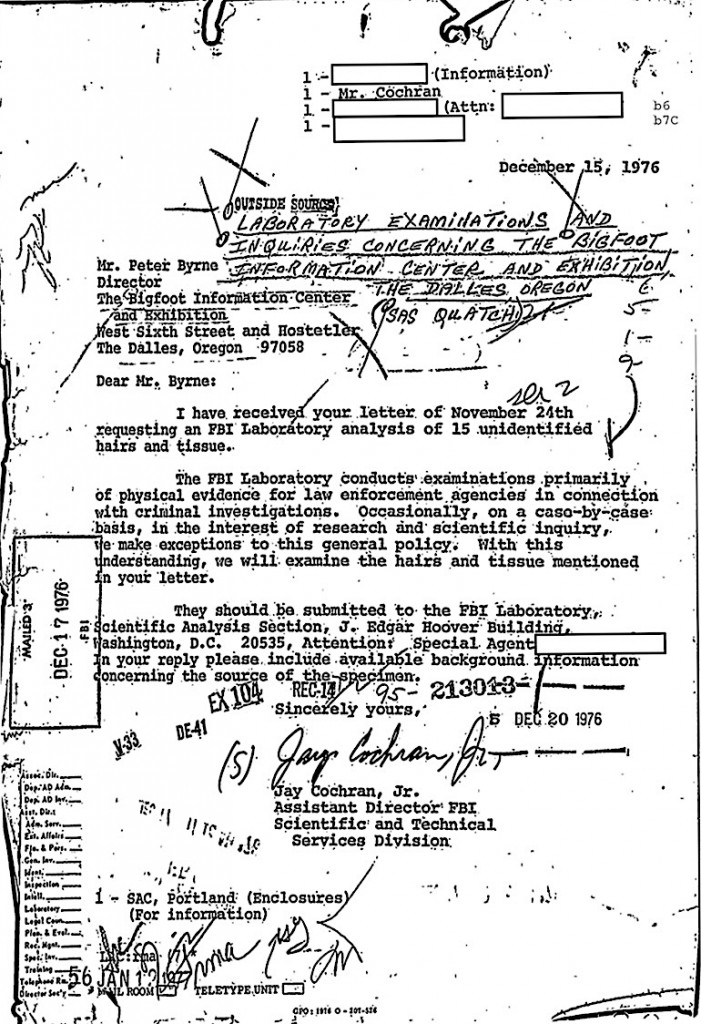 The documents clearly show Byrne persisted with his hair testing request, sent in 15 samples, and then a reply was returned to an associate of Byrne’s, as Byrne was in Nepal. 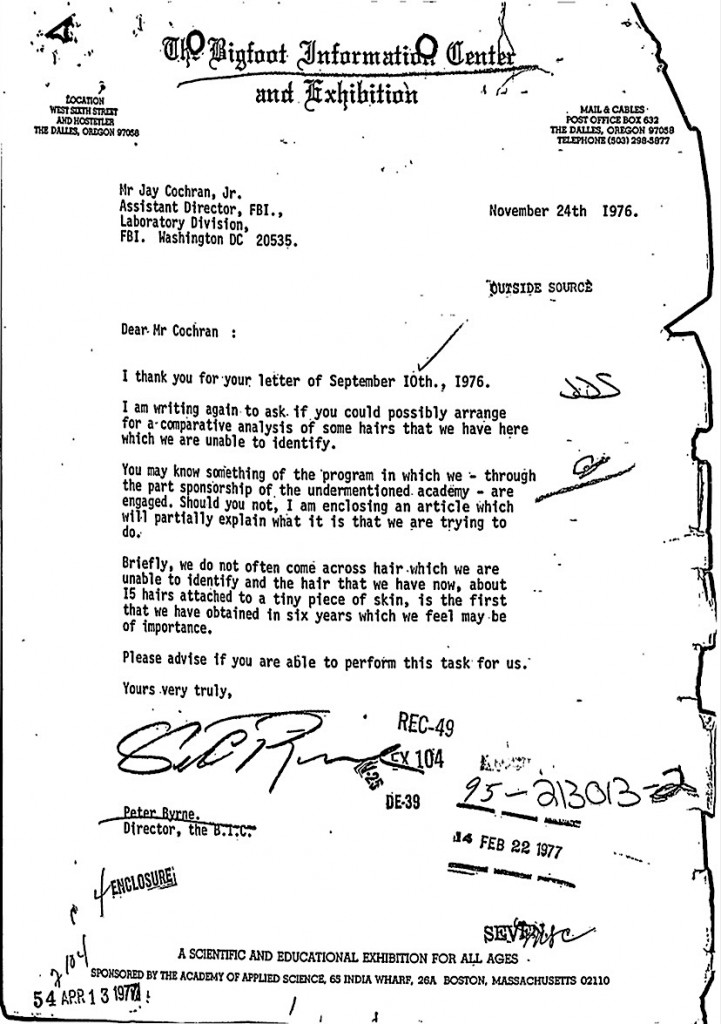 In the letter to Byrne, the assistant director of the FBI’s Scientific and Technical Services Division, Jay Cochran Jr., stated that the hairs and tissue were found to be of the deer family origin. 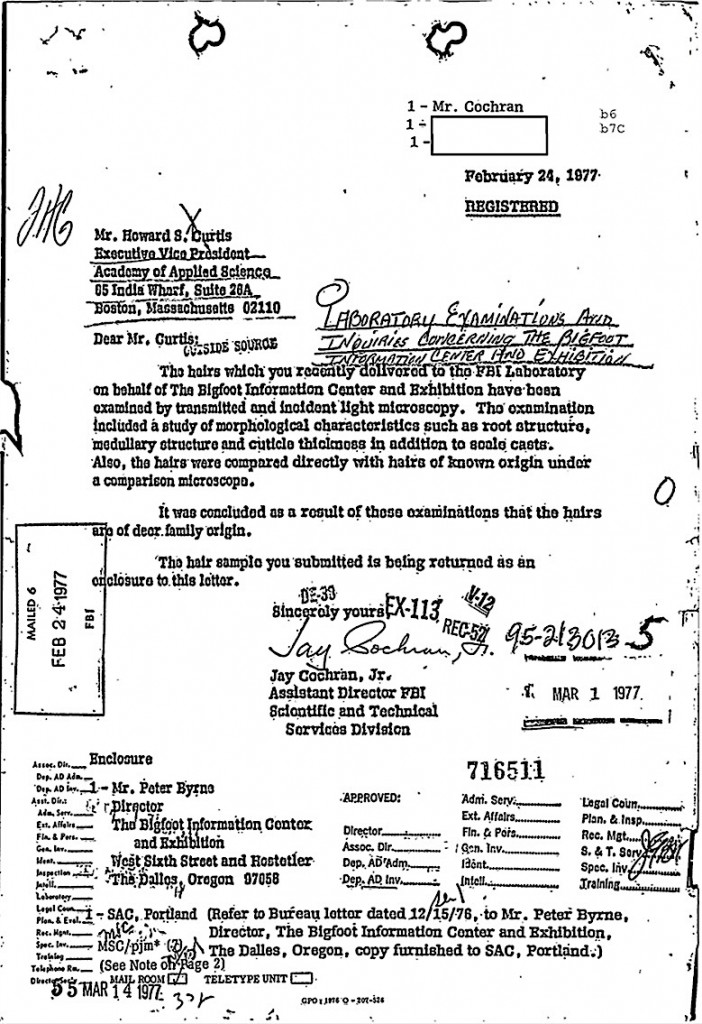 Apparently Peter Byrne was never informed of the Bureau’s analysis because his intermediary, Howard Curtis of the Academy of Applied Science, was too busy training dolphins to find the Loch Ness monster. Robert Rines, who founded the AAS mainly to search for the Loch Ness Monsters, and Curtis had been researching the use of dolphins in the Scottish lake since 1978. 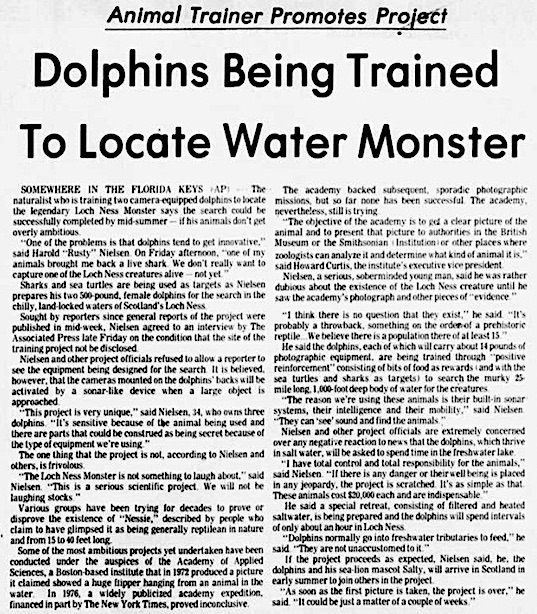 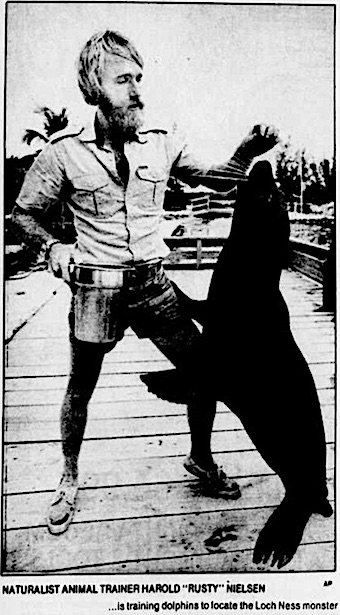 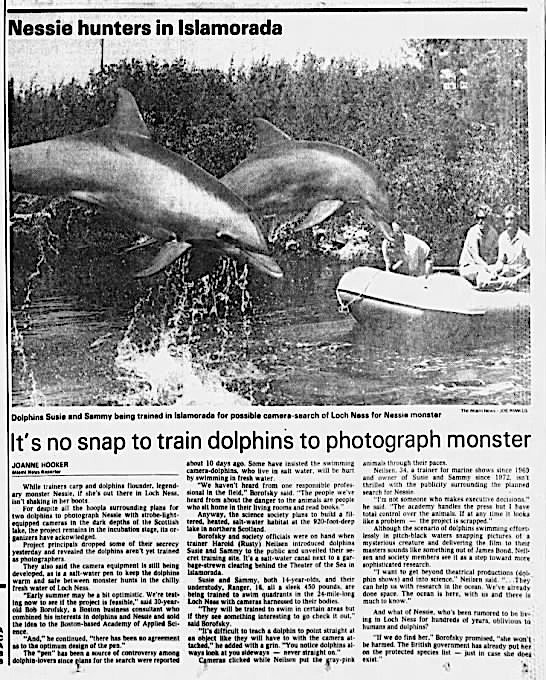 One AAS-associated person quoted as working with the dolphins was named Harold “Rusty” Nielsen (Source). 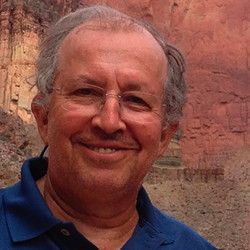 Another Boston-based “business consultant” working for the AAS on the dolphin training was mentioned. He was 30-year-old (in 1979) Robert Borofsky. (It appears Borofsky is now a Ph.D. professor of anthropology, who coined the term “public anthropology,” at Hawai’i Pacific University.

Robert Borofsky, an academy spokesman, told Sports Illustrated for publication in August 1979, “Everybody knows that dolphins are intelligent, but we haven’t even begun to explore the ways they can be used. They can do a lot more than just jump through hoops.”

The newspapers were filled with stories of AAS training them in March of 1979, but by July, the venture had taken a turn for the worse. 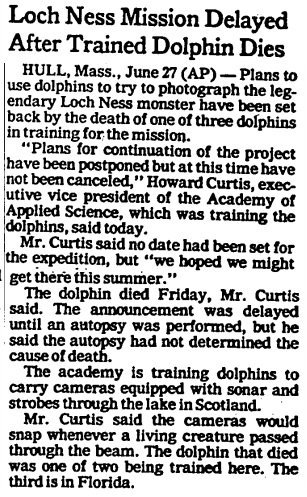 On May 14, 2018, John Greenwald, Jr., the creator of The Black Vault, the largest online Freedom of Information Act (FOIA) document clearinghouse in the world, was sent the FBI’s Bigfoot file for the years “1908-Present.”

The 22 pages were centered on 1976-1977. These are the same documents that have been placed forward by the FBI this week. 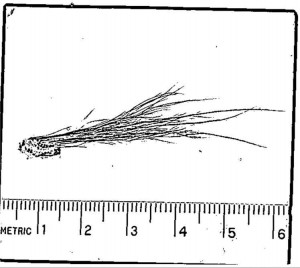 If the samples were found to be “of deer family origin,” of course, they could have been moose.

Moose hairs have had an intriguing place in Bigfoot history. The famous taxidermist who taught Jerry Crew in 1958 to make the first plaster casts of “Bigfoot tracks” at Bluff Creek, California, was Bob Titmus. 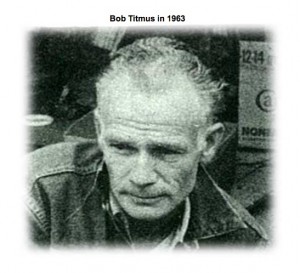 The alleged Bigfoot hairy Titmus found also came from a moose. As has Joshua Blu Buhs noted, Sanderson wondered if Titmus was faking data because California has no moose population, and therefore, there are no moose in or found near Bluff Creek, California, at all. Buhs wrote that this was “deliberate fraud” on Titmus’ part. I raised these questions originally in my 1989 book, Tom Slick and the Search For The Yeti. 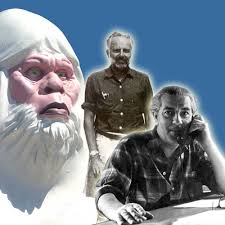 Much speculation has occurred down through the years that Peter Byrne felt pressure from the wealthy men ~ Tom Slick, Tom Page, Robert Rines ~ supporting his Yeti and Bigfoot work, to keep producing “material,” “encounters,” and “evidence.” Were any of the hair samples from Bob Titmus? 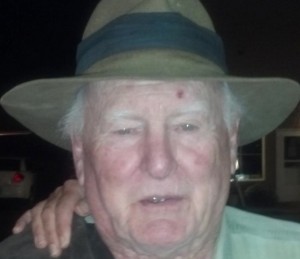 As the FBI Bigfoot news began to break, a focus was placed on Peter Byrne. At 93 years of age, he is still around and still telling stories. CNBC reporter Dan Mangan tracked him down and interviewed him this week. His article is worthy of reading thoroughly, but let’s look at some excerpts:

When told about the FBI documents showing his correspondence with the agency in the 1970s asking it to test hair samples, Byrne chuckled.

But he also said, “I don’t remember this.”

There is a dark side of Peter Byrne that few wish to discuss. He frequently says he forgets some things. Mangan dealt with this straightforwardly.

Byrne pleaded guilty in August 2013 to defrauding the Social Security Administration, the Oregon Department of Human Services and Medicaid out of more than $78,000 by concealing his travels outside of the United States from 1992 through 2012.

Byrne, who was sentenced to three years of probation and full restitution, had been receiving Supplemental Social Security Income, and had been required to report to Social Security certain travel outside of the U.S. at times he was getting that need-based benefit.

He also had more than $85,000 in bank accounts at one time when he was getting SSI and food stamps, authorities said.

According to federal prosecutors in 2013, investigators found a copy of a letter Byrne had sent his publisher, Safari Press, “directing that any future royalties for his published books be sent to his girlfriend.”

“Byrne had previously been questioned by investigators whether he was receiving royalties for the books he had written on topics such as his search for Bigfoot and game-hunting in Nepal,” the U.S. Attorney’s Office for Oregon said in a press release at the time. ” 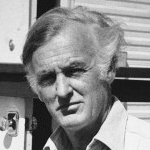 Spies in the Shadows

Peter Byrne appears to have had a “hiding in plain sight” past that involved the CIA, not in the 1970s, but in the late 1950s. As I noted in my Tom Slick book and elsewhere, the Yeti expeditions of Slick and Byrne were covers for CIA activity.

Let’s start with one critical incident, the escape of the Dalai Lama from Tibet. There are denials, for example, of the rumors circulating that Tom Slick and Peter Byrne were responsible, in some fashion, for the safe passage of the Dalai Lama from Lhasa. Since the time of Tom Slick’s first official Yeti reconnaissance of eastern Nepal in 1957, in which he was actually a member of the trek, the rumors of his expeditions’ involvement in spying have been rampant. The New York Times even saw fit to publish an article reporting on the Russians’ promotion of this story in an item entitled: “Soviet Sees Espionage in U. S. Snowman Hunt.” The April 27, 1957 piece claimed Slick was behind an effort to subvert the Chinese, and free Tibet.

…Who helped them get into Tibet? None other than Peter Byrne, Tom Slick’s man in Nepal.

~ The Dalai Lama, Slick Denials and the CIA. 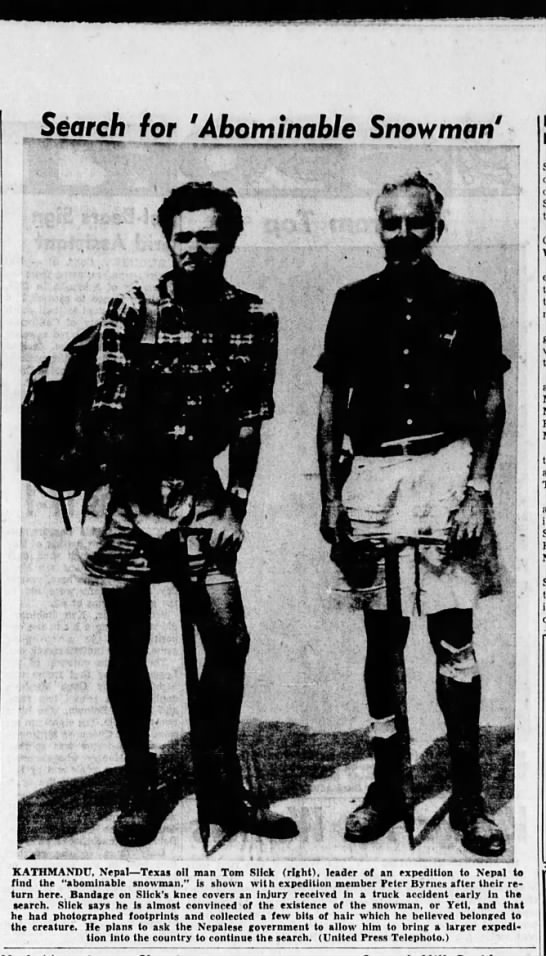 More can be found here. 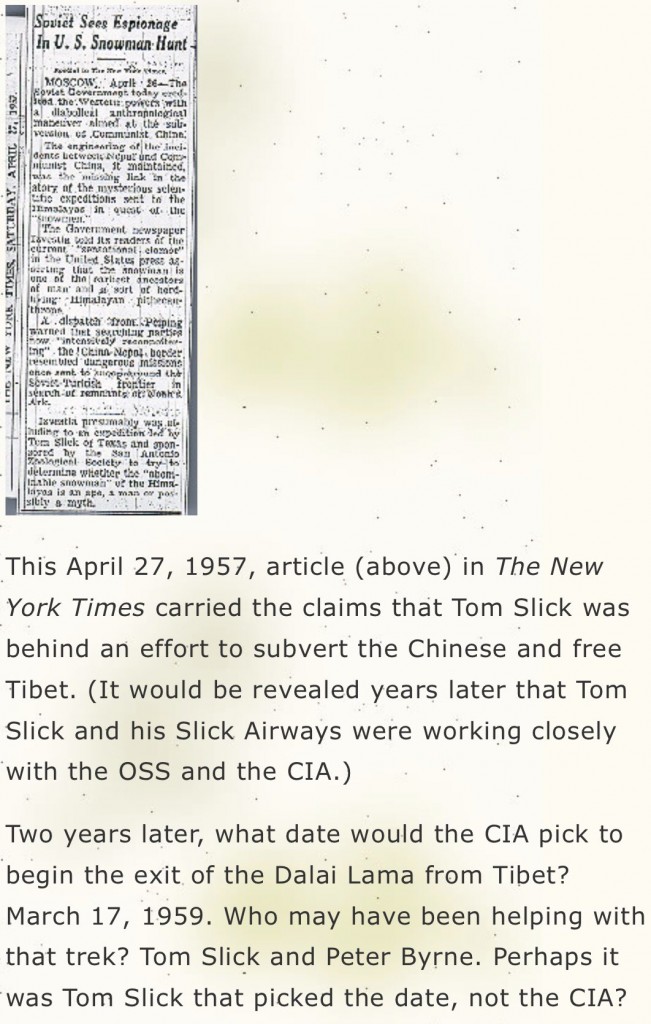 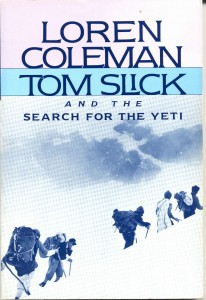 Will more be revealed from the CIA, as well as the FBI, in the future? Probably.