In response to Nick Redfern’s referring posting, regarding an Illinois Thunderbird eyewitness account, a sharp comment came in from steelcut: “Thunderbird is Gymnogyps californianus. So what?”

Is this simple answer on target?

Well, actually, let’s look at this.

Gymnogyps californianus is the California condor.

There are some distinctive descriptors that identify the California condor for birders and ornithologists. Two of the indicators are (1) the lack of white around the neck, and (2) the white underwing feathers. A third one, of course, is that California condors are restricted to a small range in California and New Mexico, with historical sightings in the Southwest, up the West Coast and perhaps throughout North America.

Two images, above, of California condors.

Two images, above, of Andean condors.

In the field, there is no mistaking California condors for Andean condors.

One of the closest eyewitness accounts of supposed Thunderbirds issued from the Lawndale, Illinois case. On July 25, 1977, as 10-year-old Marlon Lowe played outside his family home along open fields near Kickapoo Creek, near Lawndale, Logan County, Illinois, two giant birds passed over. One suddenly swooped down to grab the boy, carrying him a few feet before dropping him, apparently because of his frightened mother’s screams. 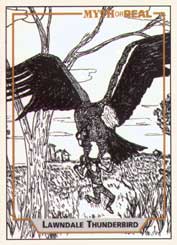 Drawing of the Lawndale Thunderbird by Jerry Coleman, based on the eyewitness accounts, which he collected firsthand.

My brother Jerry within days, interviewed Marlon Lowe and his family. I was able to return with Jerry in 1979, to revisit and re-interview the family.

Here is Jerry’s summary of Ruth Lowe’s first description of what she said of the appearance of the Lawndale birds: “It had a white ring around it’s half foot long neck. The rest of the body was very black. The birds bill was six inches in length and hooked at the end. The claws on the feet were arranged with three front, one in the back. Each wing, less the body, was four feet at the very least. The entire length of the birds body, from beak to tail feather was approximately four and one half feet.”

From the beginning, the Lawndale Thunderbird was compared to an Andean condor, a species that does have the white ring of feathers around the neck and what would look like a black body from a ground to sky sighting
. For more, see here.

Mark A. Hall and I have written of the possibility that North American Thunderbirds could be relict populations of Teratorns. We know from evidence at La Brea Tar Pits that humans and Teratorns were contemporaries.

The general thought is that the Pleistocene’s Teratorns, an extinct form of condors, looked more like Andean condors than California condors. Below are artist interpretations of what the Teratorns looked like, and the Teratorns are often a candidate for what the Thunderbirds might be. But bottomline, if the descriptions of the Lawndale Thunderbirds are any guide, while they might be Andean condors (Vultur gryphus) or, even zoologically radically, Teratorns (Teratornis merriami), they most assuredly do not seem to be out-of-place California condors (Gymnogyps californianus).

Teratons: Three images of how artists (based upon fossil evidence) speculated they appeared.