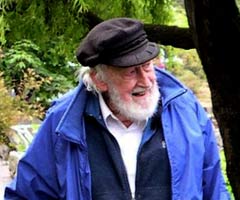 Wayne Suttles, 87, was a scholar on Pacific Northwest Indian culture often cited in landmark court rulings. Suttles was an editor, author, and anthropologist who specialized in the Salish peoples’ economies and languages and was known for research that led to the revival of traditions and languages previously thought lost. He also was well-known among Sasquatch researchers for his work in that arena too. He died of pancreatic cancer on San Juan Island, Washington on May 9, 2005. 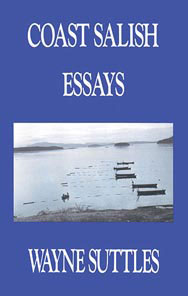 When Suttles died in 2005, I noted his passing on the Bigfoot Yahoo Group.

Many of us knew him from his association with Grover Krantz and Roderick Sprague, due to his more than mundane interest in Sasquatch traditions, folklore, and analysis. 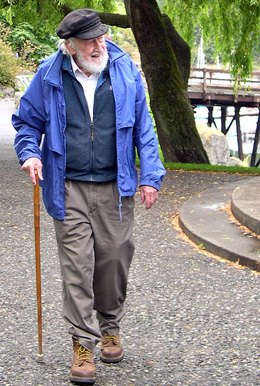 Suttles in 2004, at the unveiling of an interactive totem pole at the Port of Friday Harbor’s Fairweather Park, on his beloved San Juan Island, Washington.

His works on the subject included:

His high interest in hominology is missed.

For the record, I share, below, Suttle’s formal obituaries, in conjunction with learning of the death of Roderick Sprague.  See also the obituary for Grover Krantz, here.

Suttles, an editor, author and anthropologist who specialized on the Salish
peoples’ economies and languages, died May 9 [2005] of pancreatic cancer at his
home on San Juan Island, relatives, friends and tribal officials said.

Besides his influence in court, Suttles was widely known for research that
resulted in the revival of traditions and languages previously thought to
have been lost and for research that helped prove that tribes that had been
deemed extinct were still in existence.

“To us, it’s no different than losing one of our elders,” said Ken Hansen,
chairman of the Samish Indian Nation in Anacortes. “It’s a loss of a
national treasure. He truly was the dean of Northwest anthropology.”

Suttles was born in Seattle, grew up on his family’s dairy farm in Bothell,
earned a bachelor’s degree in anthropology at the University of Washington
and served in the Navy during World War II as a language officer translating
Japanese.

Returning to the university for graduate studies, he began field work on San
Juan Island that led him to his life’s work studying the culture of the
Salish peoples in Washington state and British Columbia. His early studies
involved many of the last generations who spoke Salish dialects as their
first language.

In 1951, Suttles became the first to receive a doctorate in anthropology at
the university and the next year began teaching at the University of British
Columbia in Vancouver.

His graduate work on Salish economies and technologies of Salish peoples,
including theoretical explanations for intertribal potlatches and marriages,
became known as “the Suttles model” and is still widely taught.

He was cited in a number of key rulings, including a critical salmon fishing
rights decision in 1974 by U.S. District Judge George H. Boldt. Some two
decades later his research proved vital to the successful Samish court
battle for federal recognition.

Suttles left Vancouver in 1963 to teach at the University of Nevada in Reno,
then moved to Oregon in 1966 and taught at Portland State University until
he retired and moved to San Juan Island in 1985.

His post-retirement writings include “Coast Salish Essays,” compiled from
more than three decades of his observations, and “The Musqueam Reference
Grammar,” published last year and considered by some scholars the most
complete work on any of the 23 known Salish languages.

Suttles also was editor of the Smithsonian Institution’s “Handbook of North
American Indians, Northwest Coast Volume 7″ — a 777-page ethnohistory
published in 1990.
This story appeared in The Daily Herald on page C4.

His works are considered the foremost references on Northwest Indian
culture:

Observations that have served as the basis for landmark court rulings in two
countries; fieldwork that has revived traditions and tongues thought forever
lost; and analyses that have helped to prove that peoples deemed long
extinct still, in fact, live on.

Wayne Prescott Suttles, a soft-spoken scholar who in recent years walked
with the aid of a cane, for decades stood high above the specialized field
of Coast Salish anthropology as its towering figure.

Now, the man regarded as “the greatest living ethnographer of the Pacific
Northwest” lives no longer.

Suttles, a renowned editor, author and anthropologist whose groundbreaking
observations on Northwest Indian culture drew on a close study of Salish
economies and languages, died at his San Juan Island home May 9 from
pancreatic cancer. He was 87.

“To us, it’s no different than losing one of our elders,” said Ken Hansen,
chairman of the Samish Indian Nation in Anacortes. “It’s a loss of a
national treasure. He truly was the dean of Northwest anthropology.”

Friends, colleagues and family remember Suttles as far more than a devoted
scholar.

He was a family man — father of seven, grandfather of 10 and
great-grandfather of one. Despite being possessed by his work and earning a
professor’s modest salary, he always made time for traveling, camping and
other pursuits with his family.

During much of the last half-century, Suttles was the authority in his
field, a man whose passion for understanding the Northwest’s first peoples
resulted in staggering works of scope and originality equaled only by his
unusual patience to teach even the most amateur of anthropologists all he
could.

“He had a great feeling for the people and the country,” his wife, Shirley
Suttles, said. “The Coast Salish lived and came from the same country he
did. The people were near and dear to him. That was his passion.”

Born April 24, 1918, to William and Bess, Suttles grew up on his family’s
dairy farm in Bothell, and from an early age showed a strong interest in
academics.

He graduated from Bothell High School in 1937 and from the University of
Washington in 1941 — just as America was preparing for World War II.

At an anthropology department party, Suttles met his future wife, Shirley,
also a UW student. They soon married and after college, Suttles enlisted in
the Navy, which had recruited him for his knowledge of Chinese language
characters that influenced Japanese.

Suttles served as a language officer throughout the war, translating
Japanese while at times stationed in Berkeley, Calif., and at Pearl Harbor,
Hawaii, shortly after its attack.

When the war ended, he returned to the UW for graduate studies. And in 1946,
while staying with his parents, who had moved to San Juan Island, he began
the fieldwork that would bring him together with tribes throughout
Washington and British Columbia.

It was during such field trips that Suttles encountered some of the last
generations of Native Americans who spoke Salish dialects as their first
language.

“It was the beginning of the end of the monolingual speakers,” Hansen said.
“He came at a crucial time.”

In 1951, Suttles became the first to receive a doctorate from the UW’s
anthropology department. His graduate work on the economies and technologies
of Salish peoples offered keen new insights — such as theorizing
explanations for intertribal potlatches and marriages — that became known
as “the Suttles model,” which is still widely taught today.

His research also drew the attention of lawyers, who made him an expert
witness in the early 1950s for the Indian Claims Commission, empanelled by
Congress to settle tribal land and compensation claims against the United
States.

He then turned his attention to writing and editing, compiling two of the
most definitive works in his field.

At the urging of Ralph Maud, an English professor at Simon Fraser
University, Suttles compiled “Coast Salish Essays,” more than three decades’
worth of observations and analyses on Coast Salish peoples.

“It was really his life’s work,” Maud said. “In a sense, it was service to
the Native people.”

Author Jonathan Raban, a Seattle transplant who discovered Suttles’ work
after relocating here in 1990, called “Essays” a “marvelously original work
with a kind of modesty and curiosity about it that’s astonishingly different
than any other (anthropological work) I’ve read.

“I found the shadow of Suttles falling upon my own pages quite strongly,”
Raban added.

In the late 1980s, Suttles served as editor for the Smithsonian
Institution’s “Handbook of North American Indians, Northwest Coast Volume 7″
– an exhaustive 777-page ethnohistory published in 1990 that brought
together Native Americans, anthropologists, linguists and others. It is
considered the definitive text on Northwest Indian culture.

“Almost all the major figures in Northwest anthropology contributed to
Wayne’s handbook,” said friend and colleague Jay Powell, a retired UBC
professor. “They considered working with him the highlight of their
careers.”

Suttles’ work has served as the basis of historical and cultural evidence in
landmark court cases in the United States and Canada, including for the 1974
Boldt decision, one of the most influential Indian treaty rights cases of
all time.

It also helped tribes deemed extinct prove cases that won them federal
recognition and land claims. His research was vital to the Samish Indian
Nation’s struggle over more than four decades for recognition, achieved in
court in the mid-1990s.

“He was a gentleman — always ethical and respectful in his dealings with
us,” said Samish elder Mary Hansen, 83, who first met Suttles in 1951. “He
did all his work pro bono. He didn’t seek to profit at all, unlike some of
his colleagues who billed us at the highest rates they could get away with.”

More recently, more than 40 years of Suttles’ research on the Musqueam
dialect of Halkomelen, a Salishan language of southern British Columbia, led
to his 2004 publication of “The Musqueam Reference Grammar.” Some scholars
call it the most complete work on any of the 23 known Salish languages.

“If you talk about Wayne Suttles, you’re talking about the person who made
the seminal contributions to Northwest anthropology,” said friend Dorothy
Kennedy, a Victoria, B.C.-based anthropologist. “We all rely on his work.”

Suttles and his wife moved to San Juan Island in the early 1990s. He
continued his research almost until his death.

Suttles’ youngest son is completing his father’s graduate dissertation in
hopes of getting it published.