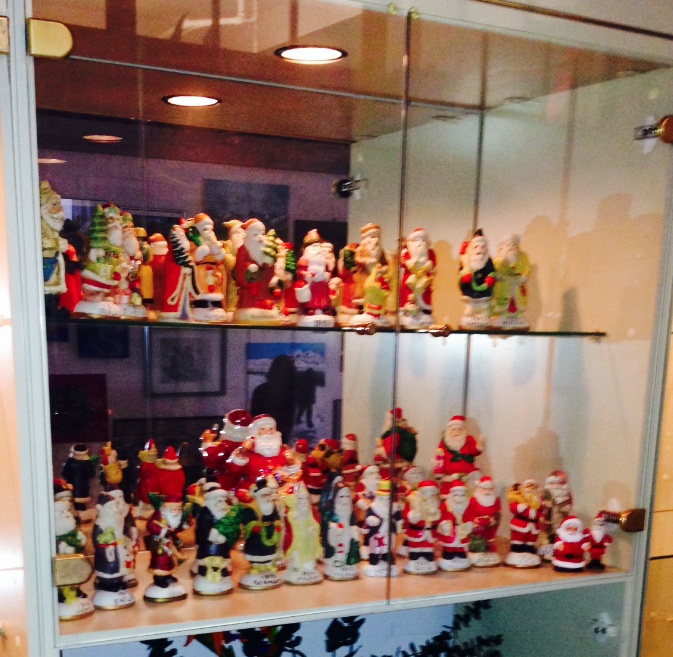 Above is part of the 2013 Santa = Wildman display recently curated at the International Cryptozoology Museum in Portland, Maine.

Since the Christmas season of 2002, I’ve been mentioning that people might wish to read the LA Weekly’s entertaining and insightful article by artist Jeffrey Vallance. (Here’s another, backup version over at The Fortean Times).

Arriving to be an art professor for a few years ago at Umea University in northern Sweden, Vallance wrote that he “was puzzled by the enigmatic heraldic symbol of Lapland, the Wildman — a hairy, reddish, bestial character dressed in leaves, wielding a gnarled club.”

Jeffrey Vallance (on the right) and Loren Coleman. Taken in June 2006.

He reflected: “To me he looked like a typical prehistoric caveman or the Jolly Green Giant. I collected vague reports of an actual Swedish Wildman (Snömannen), a Yeti-like creature believed to inhabit the remote areas of the forest. One day when wandering through the wilds of Lapland, I beheld an astonishing thing: a colossal statue of the Wildman painted bright red with a snowy white beard. From a distance it looked like Santa Claus. As I stood at the base, staring up at the Herculean statue, it hit me like a hunk of red-hot ejecta from Mount Hekla: Santa Claus, the Wildman and Snömannen must spring from the same ancient source. I determined to find the connections between these enigmatic characters.” 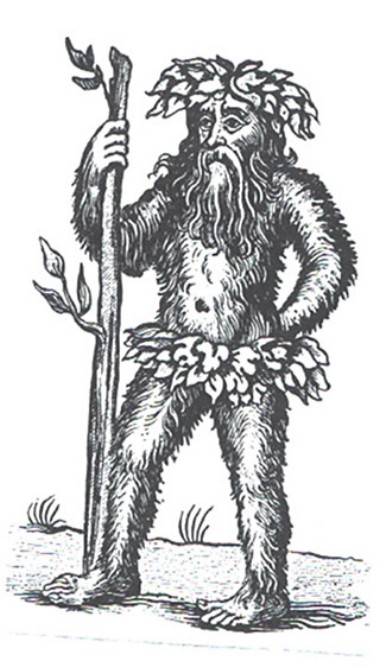 Vallance is a friendly and funny fellow, whom I met for the first time in 2005 at the Bates Cryptozoology Symposium and whose art was featured in 2006 in the traveling art exhibition in Kansas City. His LA Weekly essay is a merry discovery chase through the Lapland woods in pursuit of how the old stories of the Wildmen and Snowmen (Snömannen) are interwoven into those of Santa Claus. 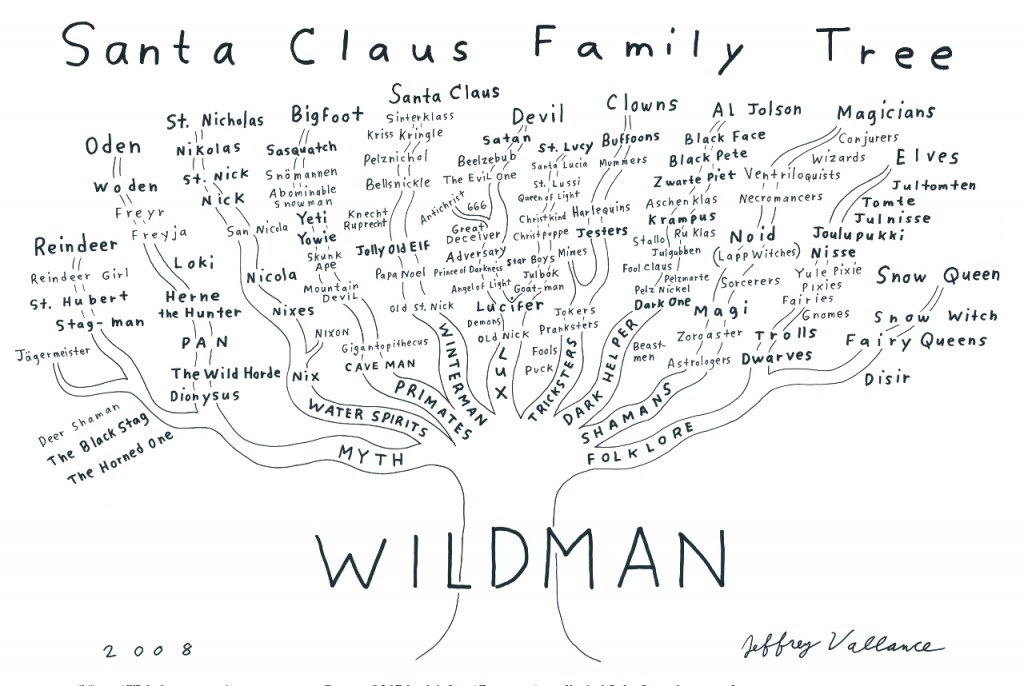 “The Wildman of the Middle Ages was described as a grotesque, bestial, ape-like creature, dark, filthy and bearded. Its body was covered in thick, matted hair and gave off a foul odor,” he continues. “The habitat of the wildman was the northern woods where he lived in a cave or den. His traditional beast of burden was the reindeer. The Wildman shares all these traits with the Yeti….Over the ages, the brutal Wildman figure evolved into a character more like a clown or holiday fool. How the Grinch Stole Christmas by Dr. Seuss follows a classic Wildman scenario: The Grinch is a hairy, Bigfoot-like creature that lives in an alpine cave in a mountain similar to the Matterhorn.” 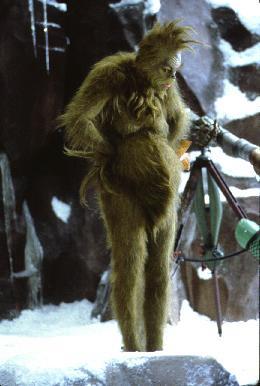 In the 2000 motion picture adaptation of Dr. Seuss’ How the Grinch Stole Christmas, Director Ron Howard has Jim Carrey, as the green Grinch, pose like Bigfoot in the classic Patterson-Gimlin 1967 film position. The Wildman is drawn full circle in art, folklore, fiction, legend, and popular culture. 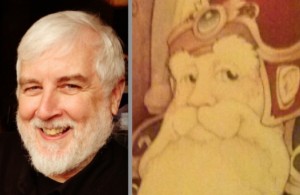 Enjoy Vallance’s article and reflect on how Santa Claus and Wildmen are interrelated. Read elsewhere about what I’ve written on Wildmen and cultural icons, and for an especially thoughtful examination of this topic, devour the wonderful book, Santa Claus, Last of the Wild Men: The Origins and Evolution of Saint Nicholas, Spanning 50,000 Years by Phyllis Siefker. 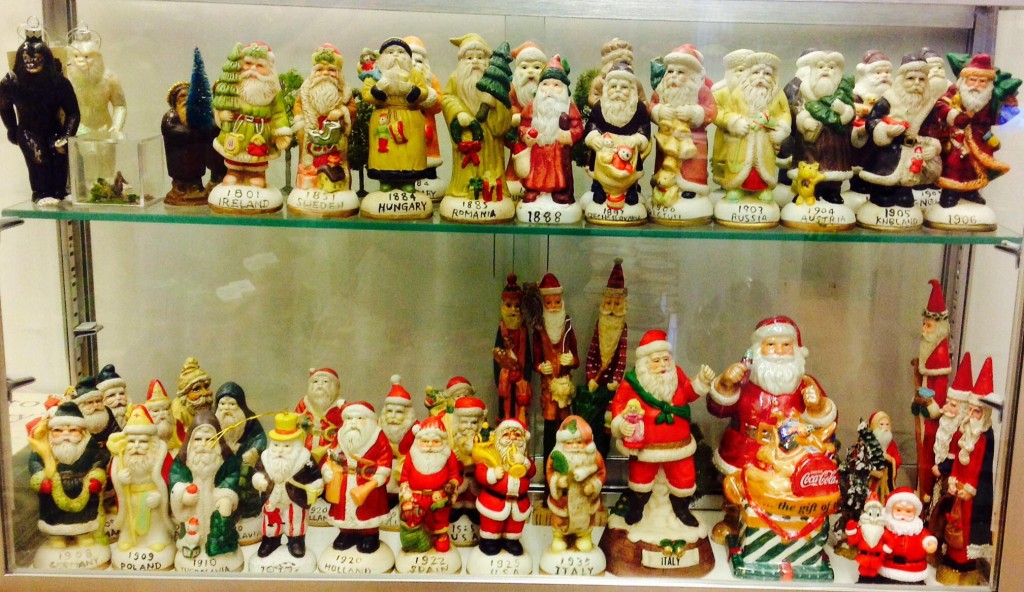