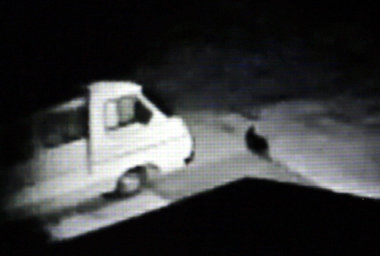 Folsom resident Randy Davis was sitting at home in his equipment room late Saturday night when on his surveillance monitor he noticed a large cat walk across his asphalt driveway. On closer inspection, Davis thinks the image is that of a black panther. Davis courtesy image.

But, in reality, do these images appear to have been captured of folks’ pet black cats? Or giant black panthers?

Since February 1st, the media in Louisiana has been noting the reports of melanistic large felids on the prowl.

“Louisiana wildlife officials searched the woods of Plaquemines Parish on Monday with a tranquilizer gun and a digital device that emits a panther growl, in search of a giant black cat believed on the loose since Hurricane Katrina. The panther is roughly 7 feet long and has been spotted by multiple residents in Plaquemines Parish, most recently in the Phoenix area, according to sheriff’s deputies,” reported local ABC station WAPT.

The Phoenix area mentioned is on the west bank of the Mississippi River, 25 miles or so south of New Orleans, according to Cryptomundian Bart Portal who has been passing on news of these reports.

“We came down on a call to investigate and started walking through a little patch of woods and I actually saw it at about 12 feet. It actually scared me pretty good. It startled me,” Sgt. Robert Cullum, of the Plaquemines Parish Sheriff’s Office told the television station.

Louisiana station WWL placed the reports, almost, in the context of terrorism. On February 1st, they noted, “The Plaquemines Parish Office of Homeland Security is informing residents of the East Bank of Plaquemines Parish that a large black panther is on the loose.”

On February 22, reporter Benjamin Alexander-Bloch wrote an article, “Panther sightings have residents freaked, experts skeptical,” in The Times-Picayune. He said, in part,

In the New Orleans area, panther hysteria is at fever pitch.

With residents reporting near daily sightings, you’d think we were under attack.

Truth is, the myth of the black panther in Louisiana – and throughout the United States – has a long phantom existence, according to physiologists and biologists.

Maria Davidson, the large carnivore program manager for the Louisiana Department of Wildlife and Fisheries, calmly explained that the only black panthers in existence are black jaguars found in South America and black leopards that live in Asia and Africa.

The North American black panther generally falls under the term “cryptid,” a creature whose existence has been suggested but is not recognized by the scientific community and has been deemed highly unlikely. Bigfoot and the Loch Ness Monster fall under that category.

They also have been called “phantom cats,” “alien big cats” (ABCs), and in certain circles, the sightings have been dubbed “panther paranoia.”

And while some people, including local law enforcement officials, discuss the possibility of a black cougar in our midst, Davidson assuredly said black cougars do not exist at all. They come only in tawny and fawn colors, ranging from light gray-brown to a brownish orange.

In fact, she said, Louisiana does not have a breeding population of cougars – in any color – and that the last cougar found in the state was in 2009 and that animal was genetically linked to a population in New Mexico.

Last weekend, two panther sightings were reported, one in St. Tammany Parish and one in Plaquemines Parish. A few days earlier, a man in St. Bernard Parish said he and his wife saw one sitting a block from their garage, staring at them calmly, before darting into nearby woods.

Several other reports of sightings have streamed into Davidson’s office and to the news media.

The recent fervor began several weeks ago, when a woman purportedly spotted a panther in a tree behind her house. Plaquemines Parish sheriff’s officials went out with Davidson to investigate.

Davidson said she later confirmed that the footprints belonged to a dog.

Recently a photo began circulating on Facebook, and soon made its rounds on local television news channels, that a Plaquemines woman said she took on Sunday. Davidson said the photo certainly is of a house cat, likely measuring about 3 feet from nose to back of tail.

Other supposed black panther photos have come to her attention in the past few weeks, and she said all were much too blurry to decipher.

Plaquemines sheriff’s Sgt. Robert Cullum went to the original black panther sighting in Phoenix on Plaquemines’ east bank and has searched each day with hunter dogs, trained to track deer. He said he saw a 6-foot-long black cat.

A week or so after the original sighting, residents reported that the cat had moved south to the riverside community of Davant, and now Cullum predicted it is in the Bohemian area, farther south along the parish’s east bank.

Also chiming in, Lake Borne Levee District Police and levee contractors in the Violet area have reported panthers in the area.

And last Thursday, a couple in Violet called the St. Bernard Sheriff’s Office and reported a panther near their home. St. Bernard sheriff’s officials, especially after news broke about it on Monday, searched the woods there for the past two days to no avail.

Meanwhile, a Folsom couple recently reported to television media that their home surveillance cameras caught a panther on film Saturday. They have not reported it to government officials, and Davidson said on Tuesday that she yet heard of it.

Donna Davis said she now won’t let her eight grandchildren out of the house at night.

“There is no refuting from this video what he is. It is very obvious, very clear,” she said. “From head to tip to tail it’s almost 6 feet, 7 feet and he has a girth to him like you can’t believe. It’s a massive, massive cat.”

She and her husband Randy Davis have horses on their 20-acre property but say none has been injured. She said they have now added better lighting and are using live chickens to bait the panther in hopes of getting a better shot on film.

And after the state Wildlife and Fisheries Department debunks stories about roaming black panthers, explaining that they do not exist in the area, Davidson said people often try to find another explanation, and resort to stories about how wild, exotic pets must have sprung loose from their owners.

According to urban myth, in St. Bernard’s Poydras area before Hurricane Katrina, a man owned two panthers — one brown and one black. When the deluge came, he let the beasts loose and for the past five years they’ve been out in the marshes.

St. Bernard officials say no records were kept from before the storm and most of the pre-storm staff in the local animal control department have since left town, making research into the story difficult.

But, any owners of the world’s six big cats — tigers, lions, jaguars, leopards, cheetahs and cougars — must receive a permit from Wildlife and Fisheries, and Davidson said none has been issued.