You are here: Home / What A Week In Ohio: Loose Lion, Mystery Monkey, and The Mythical Circus Train Escapees

What A Week In Ohio: Loose Lion, Mystery Monkey, and The Mythical Circus Train Escapees

Last Friday, it was a wandering lion, and then the week began with a loose monkey.

What’s going on in Ohio? 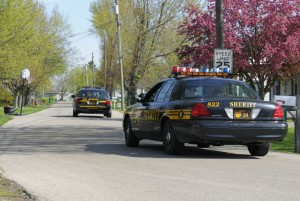 Officers search in Franklin after a lion was reported wandering in a neighborhood there April 26, 2013. Photo: Nick Graham.

On Monday, April 29, near the Cincinnati Museum Center, there were police reports of an errant monkey being seen. The police immediately jumped on the old chestnut that the monkey had “gotten loose when a Ringling Bros. train pass through the station.”
TV station WHIO reported that according to “Local12, the train was stopped near Hopple street and searched by police. The engineer of the train told them it was not carrying monkeys, only elephants and a few other animals.”
I have written often about what I call the “Circus Train Wreck Myth,” being used to explain reports of cryptids and out-of-place animals. I think this has got to be the most recent example of it actually being used.

Reports indicated the monkey was last seen near Dalton Avenue.

On Friday, April 26, a lion was reported seen wandering in Franklin.  Welden Workman said a lion he saw in a Franklin neighborhood was light beige in color. The man who saw it in his yard told police it was relaxing before wandering down the road. “It’s big, it has a big head on it,” Workman said, after he spotted the lion through his window in the 9400 block of Marcella Avenue.

Workman said he  When he first saw it, he said, it was licking itself. At first glance he thought it might be an injured deer.

He moved closer and determined it was a lion. After it sat awhile, it headed toward McGuire Lane.

“It wasn’t in a hurry, just lying there, taking it in,” Workman said.

The search for the lion was canceled after officers scoured the area looking for it between 10 and 11 a.m. on Friday.

Hat tip to Chris in Ohio for the heads up.
by Loren Coleman on April 30, 2013 in Alien Big Cats, Mystery Cats, Out of Place | Tagged Loose Lion, Mystery Monkey, Mythical Circus Train Wrecks, Ohio
Previous Entry: Calling All Eyewitnesses of Maine Squatch!
Next Entry: Dr. Nolan on Ata: Not Alien But Human