You are here: Home / Dr. Nolan on Ata: Not Alien But Human

Dr. Nolan on Ata: Not Alien But Human

You’ve seen the media circus about the little body, perhaps.

Lee Spiegel at Huffington Post summarized the melodrama this way:

The mummified remains of what looks like a 6-inch space alien has turned “Sirius” into the most eagerly awaited documentary among UFO enthusiasts.

In early publicity, filmmakers claimed the documentary would reveal that the DNA of the creature with an oversized alien-looking head couldn’t be medically classified.

In fact, the film, which premiered Monday in Hollywood, features a scientist who concluded the little humanoid was human.

“I can say with absolute certainty that it is not a monkey. It is human — closer to human than chimpanzees. It lived to the age of six to eight. Obviously, it was breathing, it was eating, it was metabolizing. It calls into question how big the thing might have been when it was born,”said Garry Nolan, director of stem cell biology at Stanford University’s School of Medicine in California.

Rest of that article is here.

At the middle of this enigma is Garry Nolan, at Stanford University.

Here’s how he responded to an email inquiry about his appearance in this story:

I can’t police every website and I know I am being misquoted in many quarters.  What I said is in the attached report.
Every nucleotide so far is human.  The mystery is only I cannot find a mutation that accounts for the morphology.  But the genome is a huge place and lots of places for subtle mutations to hide.  Concluding the specimen is alien or a hybrid would be a gross overstepping of the bounds.
It is likely a human child with an unfortunate mutation.  How the child’s bones say it is 6-8 years old is a mystery. ~ Garry 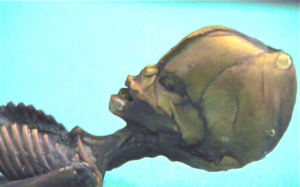 There is a need to bring modern biomedical, transparent and verifiable analysis to a variety of arenas. In the Fall of 2012 a biomedical analysis was initiated of a mummified specimen claimed to have originated in the Atacama Desert of Chile, South America. High resolution photographic, X-Ray and Computed Tomography evidence was taken, along with purification of DNA for whole genome sequence (WGS).

The first stage of the study involved analysis by medical experts specializing in pediatric growth abnormalities, with primary expertise in the genetics of bone disorders. The objective of these initial studies was to rule out, or in, previously known syndromes or rare disorders that could explain the symptoms observed in the specimen. A second consideration was to determine the “age at time of death”—given that its size would suggest that the specimen was a pre-term fetus, stillborn, or a deformed post-natal child. A third, but important, consideration was to determine if the specimen was a non-human hominid such as a South American primate.

Morphologic features include that the specimen has only 10 ribs, mild mid face hypoplasia, and shows abnormalities of the skull. The observed abnormalities do not fall into any standard or rare classification of known human pediatric disorders. As represented by a specialist in pediatric human bone and growth disorders (see attached report), the 6 inch specimen is a human that was likely 6-8 years of age at the time of death (age based on epiphyseal plate X-Ray density standards). X-Ray imaging and CT scan results confirmed the specimen is biological and is not a non-human primate. The specimen was concluded by the medical specialist to be a human child with an apparently severe form of dwarfism and other anomalies.

To further investigate the specimen, and to determine possible genetic drivers of its observed morphology,tissuefromthespecimenwassubjectedtowholegenomesequencing. 3milligrams of tissue was used to prepare 12.5 micrograms of purified genomic DNA. The DNA was of high quality, showing little to no serious degradation. DNA was subjected to Illumina library preparation and sequencing on Illumina Miseq (PE250x2), Genome Analyzer IIX (SR36x1), and Hiseq 2000 PE100x2) sequencing platforms according to manufacturer’s protocols.

Over 560 million paired end sequence reads passed automated quality control filters and provided an estimate 19.6X coverage for the whole genome. Approximately 509 million (~91%) reads were mapped to the human reference genome hg19 (providing a 17.7 fold coverage of the genome). The presence of ~9% “unmatched” DNA should not be interpreted to represent anything unusual about the specimen itself. Reasons for the lack of match can include artefacts generated during library preparation, low quality reads from the instrument, or insufficient data to allow computational alignment against the human reference standard. Further, since this sample is likely to be at the least a few decade olds, and possibly older, DNA degradation resultingin apparently “false” mutations can occur. For instance, degradation of cytosine (C) via deamination to uracil (U) would result in false interpretation of a C residue as thymidine (T) and a resulting guanine (G) misread as adenine (A) on the opposite strand.

Reconstruction of the mitochondrial DNA sequence and analysis shows an allele frequency consistent with a B2 haplotype group found on the west coast of South America, supporting the claimed origination of the specimen from the Atacama Desert region of Chile. Sequence analysis definitively rules out the specimen as an example of a New World primate.

Preliminary results demonstrate no statistically relevant alterations of genes encoding proteins commonly associated with known genes for primordial dwarfism or other forms of dwarfism. Therefore, if there is a genetic basis for the symptoms observed in the specimen the casual mutation(s) are not apparent at this level of resolution and at this stage of the analysis. As the current list of human disorders is far from complete and many human disorders are polygenic, there might remain to be found a combination of mutations working in concert that lead to the observed defect(s).

Next steps: This preliminary report demonstrates how currently available biomedical technologies can be readily applied to the analysis of archeologically and anthropologically relevant human specimens with genetic disorders of unknown origin. This report is not a formal conclusion on the nature of the mutations or the underlying cause of the disorder in this human specimen. Currently the data represents (conservatively) a 15 fold whole genome reading and as such is insufficient for definitive conclusions. Future plans include continued study of this specimen to establish up to a 50 fold WHS read that could point to targeted sequencing of hypothetical causal mutations. Comparison of the observed sequence variations against recently developed ethnically focused genome databases is planned. Full analysis of the DNA, and attempts to link genetics to morphology, will eventually follow in an appropriately peer-reviewed article in an accredited scientific journal. The results will be independently verified before publication. 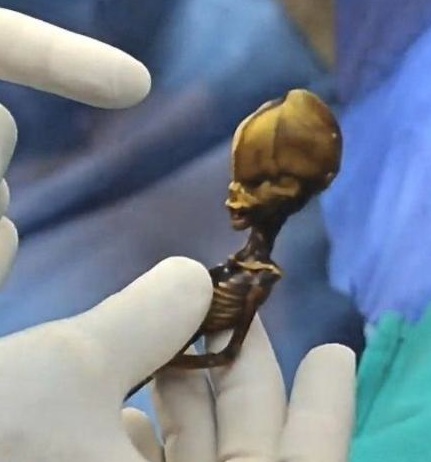 Thank you very much for the opportunity to examine the radiographic images of this specimen.

I have examined in the course of my career many skeletal and other pediatric bone anomalies and dysmorphias. This specimen does not fall under any known, to me, class of disorders or syndromes. As I told you during our last meeting (when I formally went over the images in preparation for the formal report) — there is no known form of dwarfism that accounts for the anomalies seen in this specimen. Most interestingly, based on knee epiphyseal standards, the specimen appears to be 6-8 years old. While there remains a possibility this latter result is due to some form of unknown progeria (rapid aging syndrome), in my opinion this is a low probability.

In many respects the proportions of the limbs and extremities are normal. The major abnormalities appear to be (1) the size of the specimen, which is not in accordance with an apparent age of 6-8 years, (2) mid-face hypoplasia (underdevelopment of the jaw), and that the specimen has only 10 ribs (humans normally have 12).

Good luck with your work on this.

Previous Entry: What A Week In Ohio: Loose Lion, Mystery Monkey, and The Mythical Circus Train Escapees
Next Entry: @CryptoLoren