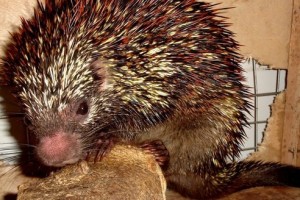 It is called now by the scientific name Coendou speratus. A new species of tree-dwelling porcupine has been discovered in Brazil’s Northeastern Atlantic Forest.

Antonio Rossano Mendes Pontes said his team found the rodent, which is covered in dark brown spines with reddish tips, in a small and isolated patch of forest in the northeastern state of Pernambuco.

The new animal was ethnoknown to the locals as coandu-mirim.

The Pontes team calculates there are about four of the porcupines per square kilometer in the area known as the Usina Trapiche Forest Remnants Archipelago, where the species was discovered. But Pontes said he doubts whether any more of the porcupines remain outside this small pocket of forest. Even if any do still exist outside the area, Pontes said there’s little chance the different groups of porcupines have been cross-breeding, meaning their gene pool is likely already compromised by inbreeding, he told media sources.

Because it shares its habitat with a larger, previously-known species of porcupine that lives in the upper reaches of the forest canopy, Coendou speratus lives on a lower, mid-height level, feeding primarily on seeds. The porcupine’s pointy nose and long, flexible tail help it maneuver through the trees but it can’t jump and is forced to climb down, walk across the ground and up another tree if the trees’ branches aren’t contiguous, Pontes said.

Active at night, it sleeps inside hollowed-out holes in tree trunks.

Medium-to-large sized predators, ranging from wild felines like jaguars to domesticated dogs, are the Coendou speratus’ natural enemies. But human beings pose the most significant threat to the species.

“People are responsible for logging, clear-cutting and setting fire to the forests and sometimes for hunting the porcupines themselves,” said Pontes, who has been researching the little-known swath of Atlantic Forest north of Brazil’s Sao Francisco River, which cuts through northeastern states including Pernambuco and Alagoas, since 2000.

“We began by researching all the literature that describes the fauna of the region, going all the way back to the first colonizers five centuries ago, and found out that many of the animals they described are extinct,” said Pontes. “One of the incredible things with this discovery is that this species of porcupine is not mentioned at all in the literature and remained unknown to science to date.

“Given the rate of destruction in this area, where 98 percent of the original Northeastern Atlantic Forest has already been destroyed, imagine how many species could have gone extinct before we even knew about them,” he said.

It was not in the literature, but the locals knew of it.

Pontes’ scientific article detailing the discovery of Coendou speratus appeared in the zoology journal Zootaxa early in April 2013. (Apologies for the delay in this news due to the situation in Boston.)

Previous Entry: Caucasus In The News: Almas vs Almasty
Next Entry: Birthfather of Texas Bigfootery Dies and A Near Miss