You are here: Home / Birthfather of Texas Bigfootery Dies and A Near Miss

Birthfather of Texas Bigfootery Dies and A Near Miss

April has been a month that has had a dark cloud over it. This feeling even visited many of us in the realm of Sasquatch-related obituaries and near misses.

Here are some notes on recent deaths and near losses in the Bigfoot world. Our condolences to all those touched by these events. 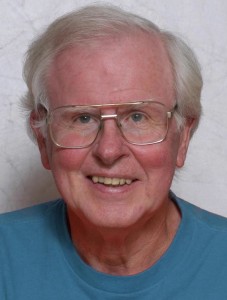 As we all were arriving at the Ohio Bigfoot Conference at the Salt Fork State Park Lodge, we were saddened to hear of the loss of Craig Woolheater’s father, Dick.

Craig writes that his father “was a physics professor and thus was skeptical of cryptozoology, although he was open to the existence of Bigfoot, if presented with hard evidence. He supported and attended the Texas Bigfoot Conference from its inception. At a group dinner in San Antonio, after the first of four presentations, during the successful run of the ‘Bigfoot in Texas?’ Exhibit at the University of Texas San Antonio’s Institute of Texan Cultures museum campus, he joked that he ‘was the sperm donor that made this all possible,’ referring to the Bigfoot group TBRC and the assembled members.”

Ironically, Craig Woolheater lost his mother when he also left Texas to come visit the International Cryptozoology Museum in Portland, Maine. His mom passed away on November 15, 2009.

The specifics of the obituary of Dick Woolheater are these:

Dick was born on April 7, 1939, in Fort Worth, Texas to John Robert and Eva Chergosky Woolheater.

Dick graduated from Arlington State (now the University of Texas at Arlington) in 1963 with a Bachelor of Science in Electrical Engineering. He received a Master of Technology from Southeastern State University, Durant, Oklahoma in 2001. He was a 35 year employee of E-Systems in Garland, Texas, starting with the company as a co-op student in college. He changed careers in 1992 and became a math and science teacher, first at the high school level for seven years and then the college level for four more years. He retired to Sun City in 2003.

In addition to achieving the rank of Life Scout in Boy Scouts, Dick worked at Philmont National Boy Scout Camp alongside his wife Jan, and stepchildren, Sara and Scott, and Scott’s wife Denice.

Dick lived in Sun City where he loved being a “snake wrangler” and a member of the Billiards, Nature and Hiking Clubs. Dick was funny, gentle, and supportive. He was an incredibly talented artist and mathematician who could create anything he set his mind to. He especially enjoyed drawing, ceramics, and flint knapping, the art of replicating Native American artifacts from flint. He also was an avid worker of crossword and Sudoku puzzles, working both in ink only. Ever the teacher, Dick was a walking encyclopedia with accurate information to share about birds, lizards, snakes, rocks, and trees and just about anything else you could find in nature. Dick liked nothing better than to work with his hands and to share his love of the outdoors with others.

Dick was preceded in death by his parents, John Robert and Eva Woolheater.

A celebration of Dick’s life will be held in early June. Source.

Chester Moore and his father

In the last few days, Chester Moore, Southern Swamp Ape investigator, who lately has been working on feline projects, has survived an event that left his vehicle as shown. 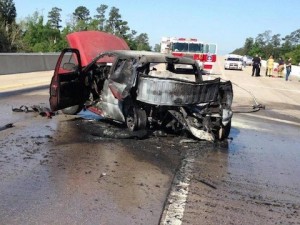 Chester and his father were on their way to Houston to give a talk when they were hit by an 18 wheeler. They survived, with minor injuries, reportedly.