You are here: Home / Cryptozoologist of the Year 2014: Bill Munns

Cryptozoologist of the Year 2014: Bill Munns 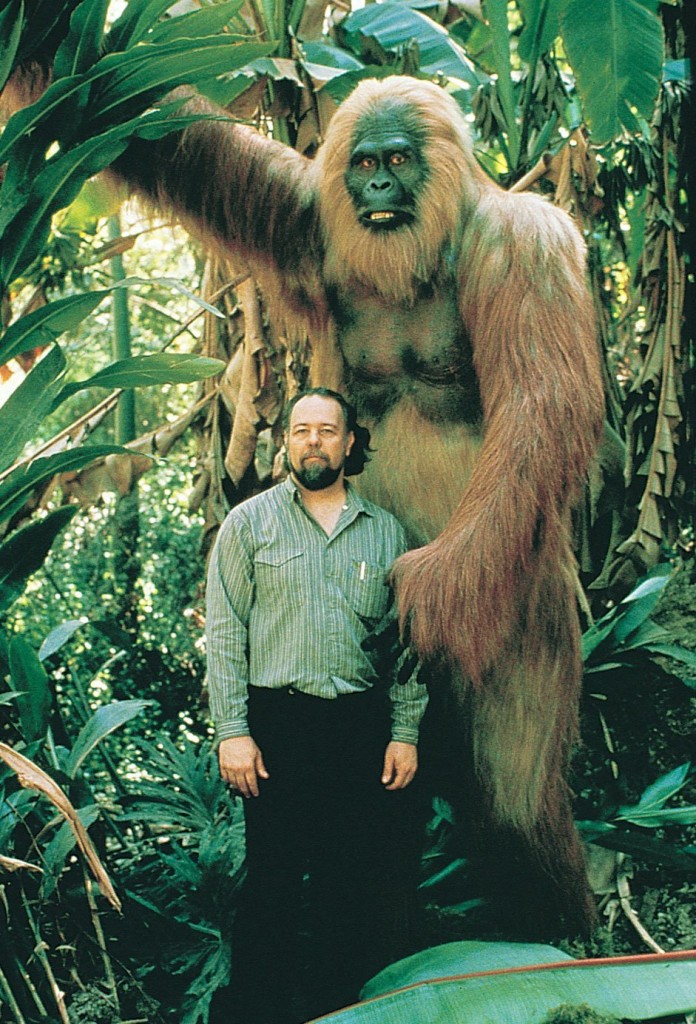 The Year 2014 saw some intriguing discoveries made and research revealed. One individual stands out in the field of Bigfoot research, Sasquatch studies, and cryptozoology for his work in pushing forward serious, thoughtful, analytic work on a specific piece of evidence – the Patterson-Gimlin footage. That person is our “Cryptozoologist of the Year 2014.” He is Bill Munns. 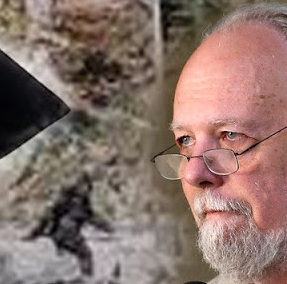 Who is this person?
William “Bill” Munns has been a makeup and special effects artist in Hollywood for decades, and a filmmaker in general, as well. He applies his unique perspective to the analysis of the famed October 20, 1967 Patterson-Gimlin film. In the last seven years, Munns assembled the finest image data archive on film and photographic material related to this classic “Bigfoot” mystery, and analyzed the apparent unknown hairy biped seen in the film with state-of-the-art analysis technology. His 2014 presentation in Yakima, “When Roger Met Patty,” and his 2014 book, When Roger Met Patty, were the culmination of that seven year research program. After 47 years, the Patterson-Gimlin footage has a serious in-depth study for all to consider. For this, we thank and recognize Bill Munns. 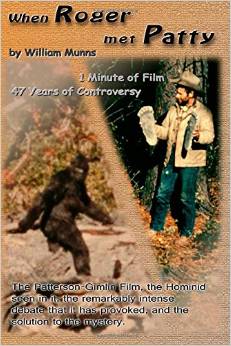 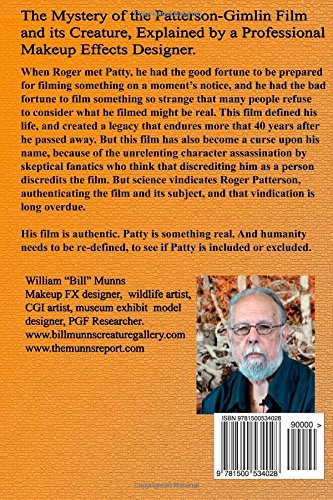 Who is this man and what kind of background and expertise did he bring to bear in his research?
William (“Bill”) Munns was born in Los Angeles in 1948, grew up in the San Fernando Valley, and attended Hollywood High School. Munns first became involved in filmmaking during his senior year, making a Super 8 film satire on television teen dance shows.
Munns went to Los Angeles Valley College, taking coursework in filmmaking and theater arts. While in college, Munns learned the basics of makeup, and then took an “Advanced State Makeup” course (including making prosthetics) offered by Mike Westmore. (Westmore is one of the famed members of the multiple generations of the makeup Westmore family. Mike Westmore is well-known for his Star Trek work, winning nine Emmy Awards, and winning the Academy Award for Make-up in 1985 for Mask. Westmore is seen weekly as an expert consultant on SyFy’s Face Off, which has been hosted by his daughter, MacKenzie Westmore, since 2011.) During the class, Mike Westmore announced that there was an opening at Universal Studios, for a makeup artist for the Studio Tour. Munns applied and was accepted. This began Bill Munns’ career as a makeup artist at Universal Studios, 1969, doing the Makeup Show.
Munns continued experimenting with prosthetic makeups, and did freelance prosthetic makeup work creating prosthetics for the Blackenstein monster in the movie Blackenstein (1970). He worked on the ABC TV Lil Abner special, doing appliance makeups, did The Dating Game, The Newlywed Game, The Lawrence Welk  Show, and 11 O’Clock newscasters’ makeups.
During these early days, some independent features Munns worked on include Timber Tramp, Snatch, Richard Petty Story, and a Purina catfood commercial.
Bill Munns started teaching makeup in 1971 and was promoted to director and supervising instructor of Elegance International, the first professional makeup artist school. He was the director there from 1973 to 1979, and taught salon, theater, film makeup, prosthetics, and high fashion.
In 1980, Munns returned to private practice as a makeup/prosthetics artist.
Munns’ film credits in the 1980s include:
Doc R&D
Savage Harvest
The Boogins (a minor horror cult classic)
Dead and Buried
Swamp Thing (first one)
Brainstorm
Witch
Beastmaster (first one)
New Kids
Quest for Fire
Better Off Dead
No Man’s Land
Return of the Living Dead
Where the Boys Are (custom “love doll” called inflatable Dave)
Baby
Blind Date (mechanically animated erotic sculptures for art gallery scene)
Micki & Maude (custom props)
The Man Who Loved Women (dog stunt double)
Heaven and Earth (Dian Fossey bioflix; prototype work only, on making real chimpanzees look like gorillas. Munns work is not in the final edited film, but he found it to be impressive experience, none the less)
ABC TV’s Orang Suit
Alchemy 2 (with Ken Forsee, inventor of the Teddy Ruxpin doll, for the ABC TV special on Teddy that Ken’s company produced; Munns was the foam latex suit specialist among the costume fabrication crew)
The Munsters Today (Munns was the prosthetic designer and key makeup/wig designer on the pilot episode and first show of the series)
AST Computers (parody of 2001 Dawn of Man sequence, with Munns designing five ape suits and servo motor animation of heads for facial expressions)
Kraft Macaroni & Cheese’s Alice in Wonderland parody (Munns did the prosthetics for the Mad Hatter character, faithful to the Tenniel illustrations).
Goolab Toys aliens
Gold Elephant
What Waits Below
Hugga Bunch
Three Breasted Chicken
Quest for Burger
Chevy Metamorphous
Foam Latex Puppet Fabricator working for puppeteer Tony Urbano, molding and casting foam latex puppet heads for numerous jobs for him over 15 years.
Munns resumed teaching makeup part-time at a vocational school called Learning Tree, where he was involved with courses on makeup and prosthetics from 1987 to 1994
In the late 1980s, Bill Munns began a transition to other media. He had grown weary of doing zombies and swamp monsters, desiring to prove his skills were up to the challenge of excellence and realism.  He started creating superbly realistic wildlife sculptures of full scale animal figures and museum quality prehistoric human ancestor models. In 1988, Munns took the “Best in World Recreation” award at the world taxidermy championships (and won again in 1992).
Munns’ work was recognized during this period by publications such as Cinefantastique, which ran articles on his work on Swamp Thing and the Return of the Living Dead (his side of that disaster, as he calls it). Fangoria ran a two issue bio of Munns, in issues 25 and 26, i.e. Fangoria (USA), 1983, Vol. 3, Iss. 25, pg. 53-57, by Bob Martin, “Bill Munnis, Part One: Who is He? A Controversy Resolved.” 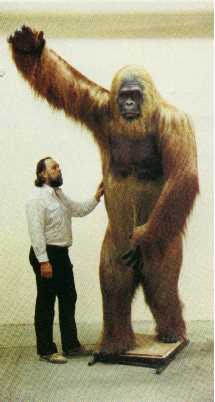 In 1998, Munns started working at Creative Presentations, Inc, Valencia, California, and was hired to help them develop a capability to enter the museum market and compete with other companies. While there, he designed, sculpted and figure finished a Gigantopithecus figure (see above) as a museum showcase figure (and photos of Munns beside it now populate many Bigfoot articles and websites). He was project manager on the LA County Natural History Museum Bird exhibit, was designing sculptor and project manager on the T. rex for Knotts Kingdom of the Dinosaurs upgrade. He was designer of a realistic bald eagle figure for an Indian Heritage Visitor Center in Vancouver, worked on an ET stroller costume for Universal Studios (that later got replaced with an animatronic figure), and oversaw the refitting of the Gigantopithecus figure into a “Bigfoot” figure for the IAAPA trade show in 1989.
Bill Munns was promoted to Vice President (one of four) in 1989, when John March moved up to President and Gene Bullard moved up to Chairman. Munns left CPI in August 1990 to resume his career as independent artist.
In 1991, Munns was commissioned by the French National Museum of Natural History to create two animatronic models of Archaeopteryx, for their renovation of the Grand Gallerie of Zoology. In 1992, Munns returned to CPI as freelance artist for the Fuji/San Rio dinosaur show, sculpting the 23 feet tall Tarchia dinosaur. 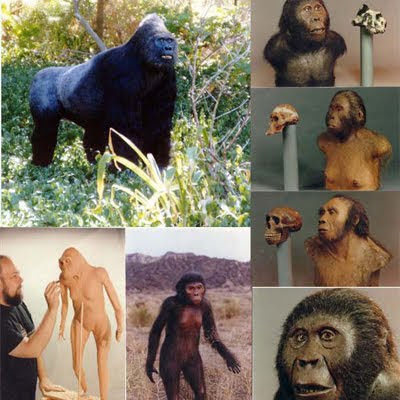 During the same year, Munns also teamed up with the San Diego Museum of Man to create a joint venture exhibit Faces on Fossils, that showed both the evolution of humans and how the appearance of these ancestral forms is created. It debuted in San Diego successfully, and then went on a five year exhibit rental tour across America. The figures Munns created are now part of a permanent installation at that museum.
In 1993, Munns started working at AVG as contract sculptor and figure finisher, doing numerous tigers for a theme park job of theirs, and then helping them get the bid for the 1993 Fuji/San Rio dinosaur show. He was AVG project manager as well as figure designer, lead sculptor and figure finishing lead. He also helped sculpt and design the 65 feet tall dragon for the Excallibur Hotel in Las Vegas.
In 1993 and 1994, Munns received a contract to outfit a new Archaeological Theme Park in Holland (Archeon, in the town of Alphen Rhine) with a full set of prehistoric wildlife figures showing the evolution of life first in the sea, then on land, and finally human evolution. 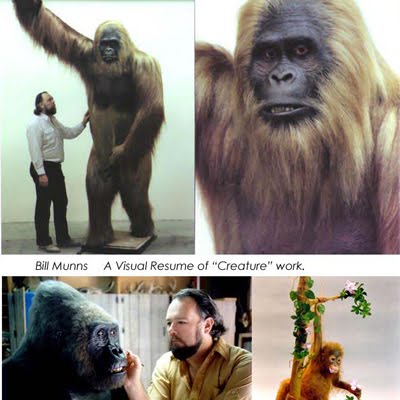 Other museum projects that Bill Munns worked on, include:
Chimps for Educational exhibit, Japan
Natural History Museum in Kyoto, Japan (creating three prehistoric cats, Dinictus, saber-toothed cat, and the giant cave lion)
Potomac Museum Group  mammoths
Tokyo Broadcasting Commission and the World T. rex Expo (the evolution of flight with three figures – the small dinosaur Compsognathus, the proto bird Archaeopteryx, and finally a modern peregrine falcon)
Ashland Oregon Museum of Natural History (two bald eagles)
Gorilla Rentals – Buddy, Disney animation, San Bernardino Museum, Maryland Museum
Film industry work in the mid-1990s included an animatronic bear for a Hostess Twinkie commercial.
Extensive makeup, wigs and prosthetics for the TBS TV series The Chimp Channel.
Working with Animal Makers in 1996 and 1997, Munns created chimpanzee figures for the HBO Jane Goodall promo spot that won a Cleo, green wing macaws for a Texaco commercial, a bald eagle for a Anhiser Busch commercial, and some dog prosthetics for a Pepsi commercial.
In 2000-2001, Munns was hired by Jester.com  to create VRML scenes of the Great Pyramids, the Lighthouse of Alexandria, an NFL stadium, and the Great Wall of China. In 2000, Computer Graphics World magazine ran a four-page portfolio of Munn’s Seven Wonders artwork. Then in 2002, in their 25 year retrospective of milestones in computer graphics, his portfolio of work was recognized as one such milestone. 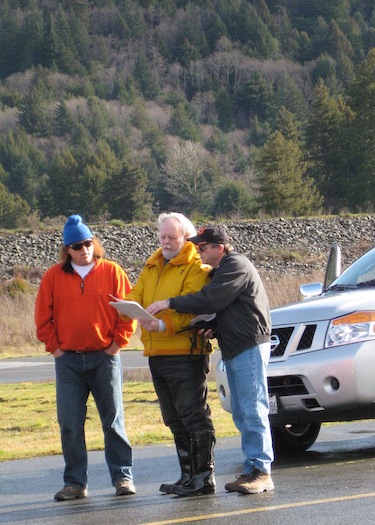 In recent years, through presentations and work on American Paranormal (“Bigfoot” episode, 2010), and MonsterQuest (2009-2010), Bill Munns analyzed and extensively worked with the Patterson-Gimlin footage and other Bigfoot material. 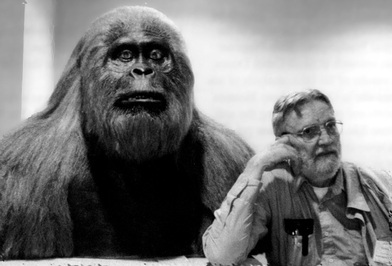 The late Grover Krantz is shown with Bill Munns’ model of Gigantopithecus. 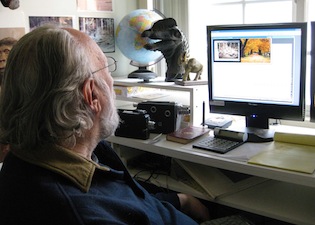 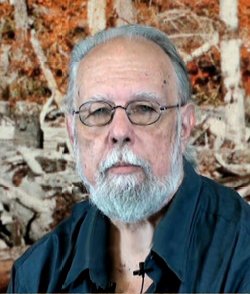 Recent Past Cryptozoologists of the Year:

Cryptozoologist of 2013: Bryan Sykes, for his DNA findings on Almas, Bigfoot, and Yeti samples.

Cryptozoologist of 2012: Cliff Barackman, for his grounded role model membership of the cast of Animal Planet’s Finding Bigfoot.

Cryptozoologist of 2011: Mark Murphy, for his National Archives research discovery of papers detailing for the first time the United States government’s attention to the search for Yetis roaming the mountains of Nepal in the 1950s.

Cryptozoologist of 2010: Ngwe Lwin, for his field interviews leading to ethnoknown research leading to his discovery of a little-known new primate species, the new Mae Hka snub-nosed monkey (Rhinopithecus strykeri).

Cryptozoologist of 2009: Gabriele Gentile, for his discovery of the Galápagos iguana, a newly-verified pink and black species.

Cryptozoologist of 2008: Andrea Marshall, for her five years of research resulting in the discovery of the giant manta ray as a distinctive new species, separate from the reef manta ray. She may have also found evidence of a future new, third species of manta.

Your support of the labor to create the annual lists is greatly appreciated, and critically needed.