You are here: Home / Misunderstood Yeti 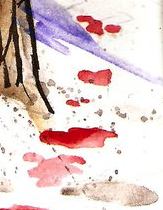 Today, a new piece of art was added to the International Cryptozoology Museum. It is a watercolor and ink painting, “A Misunderstood Yeti” by Canadian artist Michael Joyal. It carries with it a spirit of thought-provoking pondering.

One of Winnipeg’s up-and-coming artists, Michael Joyal’s work draws the viewer into a world of wonder and mystery, where the divine and, sometimes, darkness lurk in unexpected places. He works in a number of mediums, pen-and-ink, watercolors, collages, shadowboxes … mixing and juxtaposing images upon slices of real life. Joyal received his BFA front the Nova Scotia College of Art & Design. He has shown in group and solo shows in Edmonton, Ottawa, Halifax and Winnipeg.

For the cryptozoology museum, the painting is intriguing because, of course, to survive, the Yetis of southern Asia have to kill and eat prey. It is a rare artist who attempts to capture the imagery that must be associated with those moments. Artist Joyal recreates a precise point in time in this Abominable Snowman’s life, with the popular cultural whiteness of a Yeti, in contrast to the blood red resulting from an unseen encounter.

The museum is delighted to display this in our outer Art Room, beginning on May 7, 2012.

Please don’t forget to register your vote for the International Cryptozoology Museum before May 18th, as noted here.