The International Cryptozoology Museum is looking for an antique. Do you have one of these around? 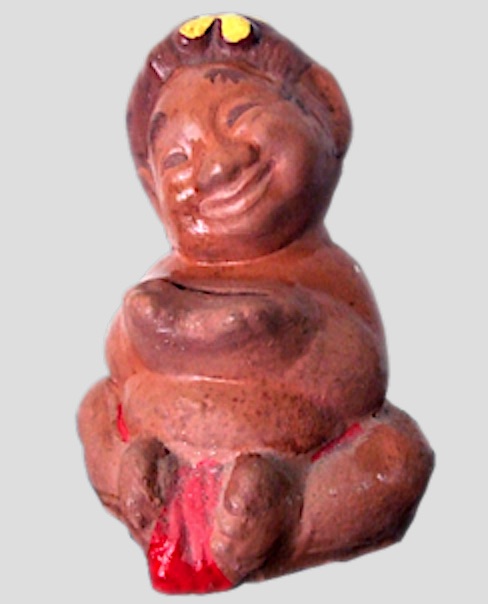 Menehune bank from 1946. Made for Bank of Hawaii as a promotional giveaway to encourage island children to save their pennies.

Are you a member of the Still Bank Collectors Club of America (SBCCA) or the Souvenir Buildings Collectors Society (SBCA) who might know where to pick one up for our exhibition? Please contact Loren Coleman.

Menehune drawing by Harry Trumbore, from The Field Guide to Bigfoot and Other Mystery Primates.

I once journeyed to Hawaii over three decades ago, for a two-week stay with my son Malcolm and (my now former) wife. I spent time on Kauai investigating recent sightings of the Menehune seen around that island. My research resulted in the location photographs and content in the article, “The Menehune: Little People of the Pacific,” Fate, Vol. 4, No. 7, July, 1989.

I also summarized my investigations of the 1940s’ Waimea sightings of Menehune by school superintendent George London and about 45 children from two middle elementary level classrooms, on pages 148-149, of The Field Guide of Bigfoot and Other Mystery Primates.

Details of the encounter were recalled for me by Reverend Kenneth W. Smith, the pastor of Waimea’s Foreign Church, Christian Church and Hawaiian Church, who had spoken with many of the witnesses first hand. They told of seeing the Menehune playing around the large trees on the lawn of the parish property, which stands directly across the street from Waimea High School today.

I highly recommend that people in Hawaii visit that site today, as an interesting point in a cryptozoological tour of the islands.

As I briefly mentioned on Coast to Coast, there was actually a census done where Menehune were counted. An anthropological study of Menehune accounts authored by Katharine Luomala and published by the Bishop Museum in 1951, noted that 165 years previously, under the reign of Kaumualii, the last independent ruler of Kauai, a census of the population of the Wainiha Valley revealed that out of 2,000 people counted by the king’s agent, 65 were Menehune. Luomala herself wondered if the little people might be a “tribe of dwarfs.”

In the field guide (page 148), I also mention the accounts of Menehune-like figures, “believed to be dwarfs,” from the island of Fiji, southwest of Hawaii, according to the Fiji Times of July 19, 1975. The six witnesses to a mid-afternoon encounter described seeing eight figures, two feet tall and covered with black hair, run behind some bushes and disappear.

The Menehune of Hawaii directly relate to the reports of the Hobbits of Flores, Indonesia (cover and pages xvi-xvii), and the Nittaewo of Ceylon/Sri Lanka (pages 128-129).

Needless to say, the Museum would appreciate any Menehune objects as donations! Please contact Loren Coleman.