The Bigfoot World is in shock and mourning with the news spreading that the gentle giant Scott McClean, 50, passed away on Wednesday, January 30, 2013, due to cancer.

Scott was a generous man, who freely shared what he discovered due to his remarkable searching of often forgotten news archives for old articles about sightings of hairy upright forest creatures.

Scott McClean, a southern California resident, was known for his extensive compilations of historic newspaper articles, many of which appeared to be Sasquatch observations.

His Big News Prints and Strange Howls collections of early American stories were available for download at McClean’s website, for many years.
He collected several of his accounts of animal encounters from Library of Congress online archives. 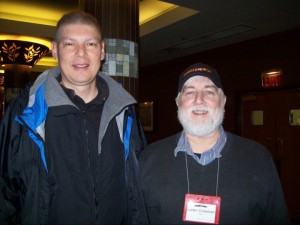 Scott greeted and visited with many of us during the April 2011 John Green tribute in British Columbia. I’m shown here, at that event, with Scott, in a photo by Todd Hale.
I was honored to have known and corresponded with him for many years.
Our condolences to Scott’s family and friends. He was a young man, and his energy and insights into the historical Bigfoot will be missed.
Kathy Strain, author of Giants, Cannibals & Monsters: Bigfoot in Native Culture, said today, “He was a good friend as well as a wonderful person.”
Bigfoot Times editor Daniel Perez remarked that “Scott was a tremendous credit to the Bigfoot community.”
Cliff Barackman posted, in part, that Scott’s “interest in the subject was spurred by seeing a juvenile sasquatch run across the road in front of his car while on a college road trip.  He described the creature as a ‘jawa for years due to its coloration and pointed head. Besides his Bigfoot interest, his love for the Greenbay Packers was legendary….”