You are here: Home / The Passing of the Markotics: Friends of Sasquatch Research

The Passing of the Markotics: Friends of Sasquatch Research 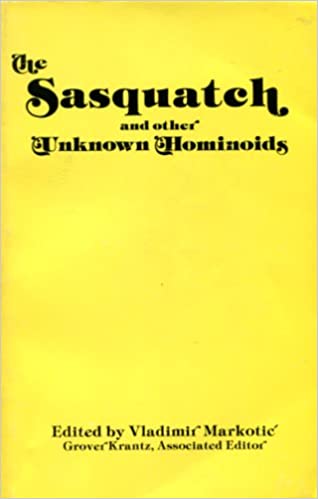 On December 15, 1984, The Sasquatch and Other Unknown Hominoids was released. The primary editor was Vladimir Markotic’, with the associated editor being Grover Krantz.

The book was in answer to the exclusion of these papers from another book on hairy hominoids. The Markotic’ book was originally conceived as a collection of papers given at the 1978 University of British Columbia (UBC) Sasquatch conference in Vancouver, but which were not included in the subsequent UBC Press volume, Manlike Monsters on Trial, published in 1980.

Grover Krantz died on Valentine’s Day, February 14, 2002. My obituary on Krantz can be found here. On February 18, 2002, I was interviewed on NPR’s All Things Considered on the legacy of Grover Krantz, here.

A Markotic and Krantz colleague and the reviewer of this collection on Sasquatch for the journal Cryptozoology, Volume 5, was anthropologist Roderick Sprague. The Markotic book, Sprague noted, “I consider to be an excellent book.” Sprague died August 20, 2012. I wrote an obituary on Sprague, here. 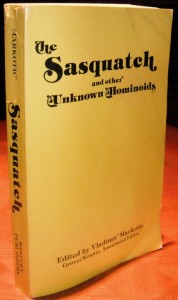 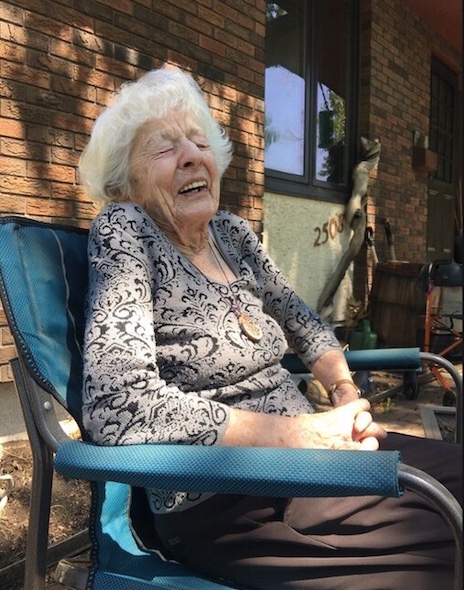 Margie, Mom, Mutti, Mutski, Tante, Oma. Margaret grew up in Germany during WWII. Close to her brothers, she nevertheless hopped on a ship to meet her fiancé [Vladimir Markotic'] in NYC. During his student years they cleaned apartments, took work in a bookstore, as security guard, as masseuse, as secretary, in bookstores, and any other jobs they could nab as immigrants. Vladimir graduated with his PhD, eventually accepting a job in Calgary in 1965. He went ahead, while Margaret travelled by train, pregnant and with small children. Margaret embraced Alberta: spending summers at Crimson Lake, joining a group that hiked the Rockies weekly, tending her garden. She had an adventurous streak: travelling from Inuvik and New Zealand with her son, to Ontario, BC, and back to Germany with daughters and grandkids. But she also loved staying home: cooking a family (wide-definition, here) meal every Sunday, volunteering as a swim instructor, teaching fitness to women’s groups and seniors, and mom-ing her 5 kids, many of their friends, and her 6 grandkids. Margaret valued the down-to-earth and the practical. But she also loved music, the CBC [Canadian Broadcasting Corporation radio network], art, and reading, and encouraged her loved ones to challenge ourselves and always think bigger.
Published in the Calgary Herald, October 11, 2019.

Margaret Markotic was 94 years old when she passed away. That would have been 25 years after Vladimir died, and there is evidence she was very active. I found these two hints online: 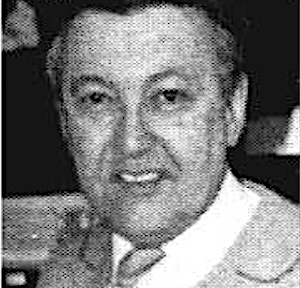 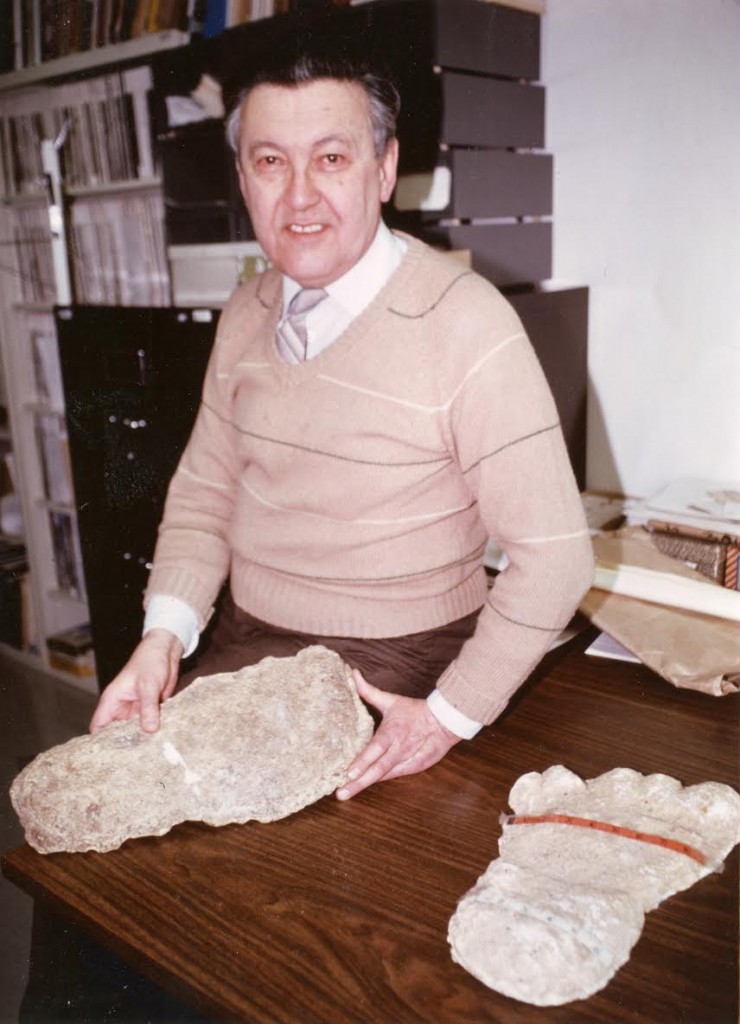 Vladimir Markotic (July 16, 1920 – November 1994)
Dr. Markotic was born in Banjaluka, Yugoslavia on July 16, 1920. He studied at the Universities of Zagreb and Graz (Austria) before emigrating to the United States in 1947. He obtained his Master of Arts degree in Anthropology from Indiana University in 1955, and in 1963 was awarded a PhD in Anthropology from Harvard. During his university years, Dr. Markotic was awarded a Hemenway Fellowship of American Archaeology and Ethnology from Harvard University and a Robert C. Winthrop Scholarship. He was also honored by being made a Thaw Fellow of the Peabody Museum of Archaeology and Ethnology at Harvard, an Associate of Current Anthropology and a Fellow of the American Anthropological Association. At Indiana University he acted as research assistant for an Air Force research project, then as a teaching assistant for the Institute of East European Studies. He conducted excavations at Thomas Jefferson’s home, Monticello, in Charlottesville, Virginia during the years 1958-1962. In 1962 he accepted a position as Assistant Professor in the Department of Archaeology at Illinois State University, and in 1965 came to the University of Calgary as an Assistant Professor of Archaeology. He was promoted to Associate Professor in 1969. Dr. Markotic retired as Associate Professor Emeritus in 1986, but remained a part-time researcher for the Department of Archaeology until 1990. He died in Calgary in November 1990 at the age of 74.Dr. Markotic was a specialist in Old World Archaeology, but his interest and activities were in fact much wider. His research notes and papers indicate that, in addition to the study of archaeology and evolution, he had an enduring interest in linguistics and written language; ethnology; a wide variety of issues pertaining to Bosnia and Croatia, including the church, heresy, medieval tombstone inscriptions, and kinship; and in Sasquatch and other such creatures. Professor Markotic was a Croatian patriot and was well known as one of the foremost experts in the history of the Croatian community in Canada — the achievements of whom he sought to publicize and celebrate through publications, symposia and conferences. He was closely involved with both the local Croatian community and with the Croatian-Canadian National Federation. Source. 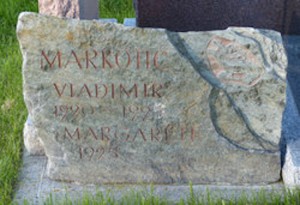 The Markotics gravesite marker, Queens Park Cemetery and Mausoleum, Section G, Calgary, Alberta, Canada.
+++
One last note: The printing of The Sasquatch and Other Unknown Hominoids in 1984 was limited, and immediately became a rare collectible. Add to this the problem that the binding would come apart, and it was never readily available.
A few years ago, a pirate printing of the book appeared, without copyright permission and a horrible misspelling of the title as a dead giveaway. Allegedly, the clone book was withdrawn, but a few, overpriced copies, are floating around. Here is a screenshot I captured a couple days ago on the Amazon website. 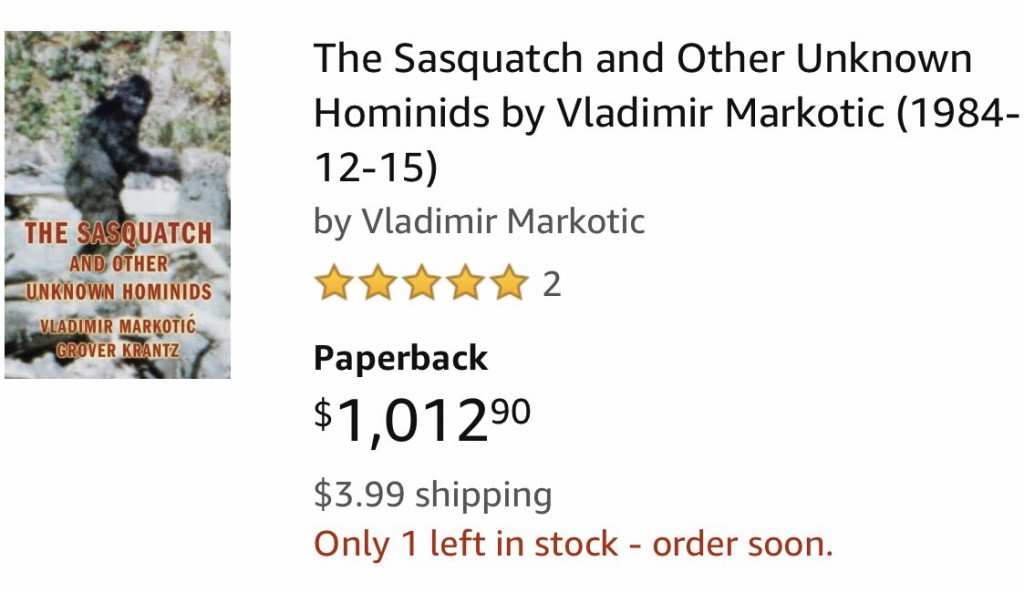