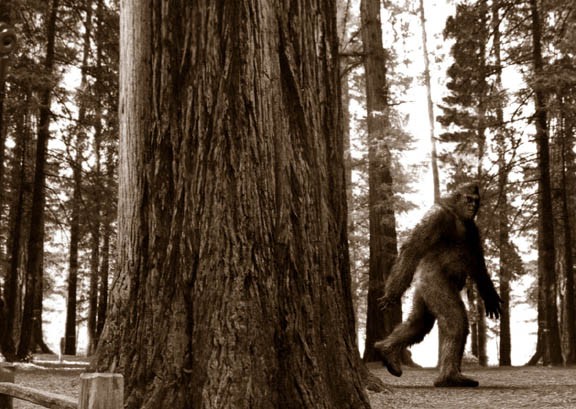 This image of Bigfoot is drawn by Paul Smith; it is sepia-colorized for the cover of Bigfoot! The True Story of Apes in America

The Top 50 Cryptids From Around The World

Cryptids are the yet-to-be discovered animals or recovered supposedly extinct zoological species that are being sought by cryptozoologists, zoologists, anthropologists, and other researchers through fieldwork in the wild, reexaminations of specimens in zoological collections, and searches of archival materials. For me, it all started with the Abominable Snowman (Yeti) in 1960, and then moved quickly to an awareness of a world filled with cryptids. 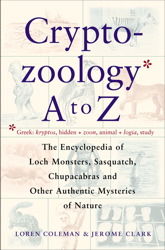 In my book, Cryptozoology A to Z, I detailed several of the well-known and lesser-known but technically unknown alleged animals from around the world that are of interest to cryptozoologists. From that 1999 work, my earlier lists, and later research and fieldwork, here’s my list of the top fifty picks of these hopefully soon-to-be-found animals, which are actively being pursued today.

1. Ahool
Giant unknown bats are reported to reside in a region of western Java, plus similar reports under different names from Vietnam and the Philippines; possibly known as Orang-bati in Seram, Indonesia.

3. Agogwe
The Agogwe are little, human-like, hairy, bipeds reported consistently from the forests of Eastern Africa.

5. Arabhar
These unconfirmed flying snakes are located in the Arabian Sea region.

9. Bigfoot
The classic Sasquatch of the Pacific Northwest is well-grounded in hundreds of years of sightings, encounters, folklore, traditions, hair samples, and footprint evidence, for starters. The Patterson-Gimlin footage captured images in 1967 of what appears to be a good type specimen of this animal.

10. Birds-of-Paradise
Six species from New Guinea and surrounding islands, and a distinctive Long-Tailed Black Bird-of-Paradise from Goodenough Island are of interest to cryptozoology. (Ivory-billed woodpeckers in America have moved from “cryptid” to “rediscovered species,” in terms of the way zoology views them today.)

12. Blue Mountain panthers
These unknown cats reportedly live in the Blue Mountains of the east coast of Australia in the state of New South Wales.

13. Blue Tiger
These mystery felids are spotted in the Fujian Province, China, and are also filed under the name Black Tiger.

14. Bobo
Sea monsters of the North Pacific Ocean are frequently reported off Monterey Bay since the 1940s, and have been given this local name.

15. Buffalo Lion
East African maneless lions are said to be man-eaters, and may reflect some new genetic alignments, akin to the King Cheetah discoveries among cheetahs.

16. Buru
Fifteen foot long bluish-black giant lizards were seen often in the swamps, lakes and foothills of the Himalayas, up through the 1940s, although they may be extinct now. More new monitors will be found, however.

17. Caddy
These unknown Sea Serpents (perhaps Mystery Cetaceans?) living off the coast of British Columbia are a popular figure in Canadian cryptozoology.

19. Chupacabras
Also called “Goatsuckers,” these bizarre Caribbean and South American cryptids are five feet tall biped creatures with short grey hair that have spiked hair and reportedly drain the blood through throat punctures of the livestock they kill.

21. Giant Anaconda
Reports have been made of 100 feet long snakes on the Rio Negro of the Amazon River basin.

22. Giant Octopus
The Blue Holes of Bimini offer many sightings of these unknown huge, many-tentacled animals.

23. Giant Sloth
Weighing up to three tons, these supposedly extinct animals have been reported in South America in contemporary times. These do not appear to be the Mapinguary/Mapinguari, which seem to be bipedal primates.

24. Globsters
Strange looking giant creatures (also called blobs) wash up on the beaches of the world, get the media and scientists excited, and sometimes turn out to be “unknowns.”

25. Hantu Jarang Gigi
Also called the Orang Dalam, Mawas, and Johor Bigfoot, these hominoids reported from Malaysia may indicate large unknown primates are still to be discovered from this corner of the world.

26. Jersey Devil
This regionalized name hides these perhaps a variety of creatures that have been haunting the New Jersey Pineland forest for over 260 years.

27. Kongamato
The natives of the Jiundu region of Northern Rhodesia (now Zambia) have firsthand encounters with these strange flying bat-like creatures.

28. Lake Storsjon Monster
Lake Sorsjön in northern Sweden appears to be inhabited by a Lake Monster, and has a relative in Lake Seljord in the Telemark region of Norway, which has its own Lake Monster swimming the waters there for centuries.

30. Loch Ness Monster
Nessie is the most famous Lake Monster in the world; they are said to inhabit this loch, an extremely deep Scottish lake.

31. MacFarlane’s Bear
The carcass is at the Smithsonian, believed to be a possible hybrid between a grizzly and polar bear. Or an new unknown species?

32. Mngwa
The Mngwa are mystery cats described as being as large as donkeys, with marks like a tabby and living in Africa – but not a known species.

33. Mokele-Mbembe
For over two hundred years there have been reports of living Sauropods (dinosaur) in the remote Congo area of Africa. They may be confused with accounts of other local cryptids, including aquatic rhinos and monitors.

34. Mongolian Death Worm
Locals in the Gobi Desert of Mongolia talk of these giant snakes, worms, or long thin lizards (also called Olgoi-khorkhoi or Allghoi-khorkhoi) as killing livestock and people with their breath or strayed vemon.

35. Mothman
A local name for giant owls (also called Bighoot) which have been sighted for over 100 years in the West Virginia-Ohio area, and elsewhere in North America.

36. Ogopogo
This is Canada’s most famous type of water monster, the specific inhabitants of Lake Okanagan in the south central interior of British Columbia.

39. Skunk Ape
Also known by the label Myakka “ape” and other local names (Booger, Swamp Ape), these chimpanzee- or orangutan-like primates have been sighted throughout central and south Florida, and are a local version of the North American Ape. They are entirely different than the classic PNW Bigfoot.

40. Steller’s Sea Cow
A once thought extinct species, could these totally marine animals, looking like huge, wrinkled manatees, continue to exist? They are contemporarily sighted by Russian fisherman and others.

41. Tasmanian Tiger or Thylacine
Thought extinct, these wolf-like marsupials are still sighted on a regular basis in Western Australia, and perhaps New Guinea too.

42. Tatzelwürm
Classic small log-shaped reptilian cryptids from the European Alps are enigmatic animals, but have they gone extinct in historical times?

44. Tzuchinoko
Unknown species of snake sighted in the upper elevations of Korea and Japan.

46. Waitoreke
These strange unknown otter-like beasts are seen in New Zealand, and as yet undiscovered.

47. Xing-Xing
This is a specific regional name, from southern China, for small unknown apes, perhaps a new subspecies of orangutan.

48. Yeren
The Chinese Wildmen are reddish, semi-bipedal, and often encountered by locals and government officials along rural roads.

49. Yeti
Yeti, perhaps unknown rock apes, are creatures reported as crossing the Himalayan plateaus and living in the valley forests. There is not just “one” Abominable Snowman, and they are not “white.”

Some former members of this list do occassionaly have to be deleted. For example, the Bili Ape (allegedly giant chimpanzees reported to live in remote east Africa) have lost status as cryptids, as they are said today to merely be a subspecies of chimpanzee. Never mind, there will be new discoveries and new additions in the coming years.
————————————————————————

Who really knows what we shall find tomorrow? Needless to say, it seems well worth looking for these cryptids! No telling what the eventual surprises will look like.

Sources
(Note: Many individual references can be consulted for information on any of the these cryptids, but the following titles reflect directly on the background research leading to why my choices are the above ones. Also, each book contains an extensive bibliography of further references.) -

Cryptozoology A to Z: The Encyclopedia of Loch Monsters, Sasquatch, Chupacabras, and Other Authentic Mysteries of Nature (NY: Fireside/Simon and Schuster, 1999)

The Field Guide to Lake Monsters, Sea Serpents, and Other Mystery Denizens of the Deep (NY: Tarcher/Penguin, 2003)

Bigfoot! The True Story of Apes in America (NY: Paraview Pocket/Simon and Schuster, 2003)

The Field Guide of Bigfoot and Other Mystery Primates (NY: Anomalist Books, 2006)