You are here: Home / New Species Being Raided For Private Pet Trade

The bubble has burst.

There are so many new animals being discovered, you had to wonder when the evil that humans do would catch up with all the good news. 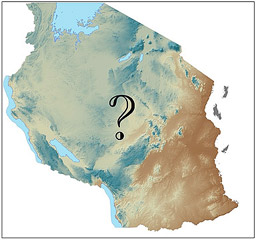 There is breaking news on December 15th of a new species of a uniquely-colored horned viper measuring over two feet long (643 millimeters) being discovered. But where exactly it lives in Tanzania is not being discussed.

But the shocking revelation that has been paired with this announcement is that past news of this kind has resulted in large scale raiding operations in the locations described. New species apparently have been targeted by pet collectors to supply a large-scale underground in exciting new animals for private collections. For example, due to this fact, the new viper’s location is “a closely-guarded secret,” say the discoverers.

Announcements about discoveries of new species are often given with great fanfare. Just this week, Voice of America published an article entitled “208 New Species Discovered in Southeast Asia,” National Geographic on “Smallest Frogs Found—Each Tinier Than an M&M (in Papua New Guinea),” and UPI that “Calif. academy named 140 species in ’11.”

What appears to be happening is that as soon as a new species is “discovered,” in rush the illegal pet trade folks to turn a profit. 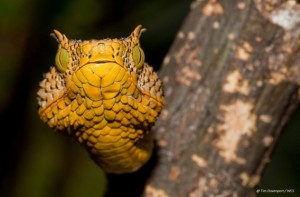 The Wildlife Conversation Society (WCS) has this to say about this:

Wildlife trade is now the second largest illegal trade in the world after drugs, with the global trade, both legal and illegal, estimated to be currently around US$159 billion a year. Reptiles play a large part in this and unfortunately the illegal trade – especially in wild-caught reptiles – is having a devastating effect on wild populations. So much so that in many parts of Africa it is the single biggest threat to the existence of many species in the wild. The colourful, fascinating African bush vipers of the genus Atheris are popular pet snakes in many countries, however, their natural habitat is seriously threatened and the numbers of wild caught animals destined for the pet trade continues to be unsustainable.

It is often the case that the first few specimens of a newly discovered bush viper can be worth a high price and this can have a very damaging impact on the population, In the case of Matilda’s Horned Viper, a sudden rush to collect as many specimens as possible could actually extirpate the species in the wild. To avoid the unsustainable collection of such a rare snake, we have agreed with the editor of the scientific journal Zootaxa – where the species description is published – to keep the locality as vague as possible (only very general information is given), with the possibility of more specific information provided by the authors on request, for scientific purposes only. Such a practice should be taken into consideration by taxonomists every time a new, rare species of potential commercial interest is described.

The Mongabay article notes: “To keep the new species safe, researchers collected eleven snakes for a captive breeding program: four males, five females, and two juveniles. The offspring of these snakes are meant to be an insurance against extinction. Along with keeping its exact location in the wild quiet, the conservationists are also going one step further to anticipate the illegal pet trade.”

“We are planning to make available the first few dozen offspring from the captive population free of charge, in order to provide the market with captive-bred specimens of the new species. The aim is to avoid collection of wild caught specimens, lower the price of the animal and encourage responsible captive breeding by keepers in the most highly demanding countries,” explains Tim Davenport of the WCS. “The ultimate goal is also to raise awareness and support for a community-based forest conservation program. Matilda’s horned viper will, it is hoped, be a flagship species for this initiative.”