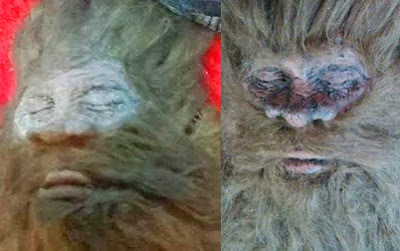 There are lots of emails, social media exchanges, and blog space being taken up this week with talk of a body of Bigfoot, the face of Bigfoot, and the man behind it.

If you read the fine print, you know that this individual is taking his bogus story and his bogus body on the road, charging folks who are interested in Bigfoot to come take a peek.

My goodness, even Time Magazine – apparently without checking this guy’s background – published a story on the web today about this stuff. They ended that one by noting that this person “reportedly plans to take the body on tour across the U.S., Mexico and Canada where, for a small fee, he will let people view the body.”

We’ve all been down this road before. In 2008, this person (in association with his two partners) set the flame and videotaped the burning of my book  Bigfoot: The True Story of Apes in America, called Matt Moneymaker, me and others by homophobic slurs on YouTube, floated a horrible falsehood about me that I won’t dignify by repeating, and, oh ya, pushed forward the (confessed) hoax that an eBay-purchased costume was a dead Georgia Bigfoot under ice.

(Warning, the language is harsh, childish, profane, and reflective of the Georgia Bigfoot hoaxers’s own homophobic issues.)

This publicity hungry guy then later decided to videotape the burning of Jeff Meldrum’s book Sasquatch: Legend Meets Science and then continue the taping as he urinated on Meldrum’s burning book.

Have people forgotten all of that? Apparently.

The guy tries and tries, until someone listens. He got Sharon Hill to notice in February 2013. But it didn’t go far enough for him and she was too smart and a critic of his. Then there was his arrest for alleged eBay fraud, supposedly not delivering Corvettes he or his female associate promised (see here).

Now, this same person trots forth with what is obviously another hoax about a piece of Wal-Mart meat nailed to a tree and a body given a four-letter name. And bingo, he gets HuffPost, UPI, IBN and Time, to name a few, to spread more of his trash – and his name. Shame on them. Shame, indeed, on them.

A few Bigfoot sites are just as guilty.

They all must know where this is going to end, even if one site claimed the dead Bigfoot body the “news of the century.”

My old buddy Ben Radford, however, has to make it worse by piling on to the entire Bigfoot community is his “New Bigfoot Claim, Old Bigfoot Hoaxer” for Discovery News. And making it a skeptic vs whatever-he-thinks-we-are debate.

Speaking of the hoaxer and his kind, Radford writes:

“Ironically, these folks may sound the death knell for serious Bigfoot research. Sooner or later the public will tire of the parade of hoaxes, exaggerated claims and publicity stunts. It will become more and more difficult for sincere, science-minded researchers  – such as Todd Disotell and Brian Sykes, two geneticists who have attempted to sequence DNA from unknown animals — to do their work.”

The “death knell,” Ben? Really? Don’t you think that’s a bit melodramatic and unrealistically, even for you?

The public will do what it does. Hoaxes are forgotten. Juicy stories are not. We are doomed to have to deal with this allegedly confirmed liar as long as the even shorter memory of the media finds a new story from him entertaining and marketable.

Real science moves forward through cautious claims, careful analysis and peer-reviewed evidence. How can it compete with outlandish, fictional claims of Bigfoot bodies for the public’s attention, support and interest?

If Bigfoot researchers wish to be taken seriously, they could start by cleaning their own house. The biggest threat to their credibility is not skeptics nor a ridiculing public but instead those who provide an endless stream of bogus claims and evidence.”

Stop yourself, Ben. You and I, who both have written books on the media, know this is a media-driven story, not a Bigfoot community-driven one. The community is forever kicking around tidbits. This guy has been trying for months to get publicity about this body or that. Sometimes, it is just *the* time for the media to go for a silly one. This is it, right now.

I was all for cleaning house in 2008. I never wished to write about him again. I wish to never speak this person’s name again. I’d rather talk about the new Brazilian tapir, but that’s just not sexy enough for HuffPost! Or apparently Discovery News.

I’m adding this late in the day, after I posted the above.

Daniel Loxton has posted a good piece that overlaps with my thoughts: “Hoaxed Bigfoot Bodies Floating at the Disreputable Low End of Bigfootery.”

Not trying to be hard on anyone but the mainstream media, for they keep doing this. Hoaxes are a very small percentage of the incoming Bigfoot data that is even given a second look by scientifically-based cryptozoological critical thinkers, from Jeff Meldrum and myself and Darren Naish and Daniel Loxton and Ben Radford and Sharon Hill.

“Well, we told 10 different stories. Everyone knew we were lying.” – the same individual as noted above, in response to why he wasn’t giving the $50,000 back to the Indiana businessman who thought he was paying for a real Bigfoot body, to WBS-TV – Atlanta, August 20, 2008. See others, here.