Come one, come all. Free food, free drinks (non-alcoholic beverages, that is), and an open house. 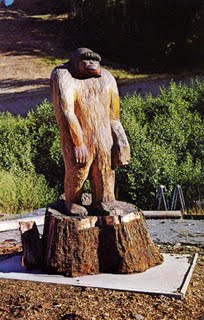 The International Cryptozoology Museum will have a Grand Opening on November 6th, 2009. Special guests will be attending on the 6th. Docents to thank will be there. First Friday friends and fans are welcome.

The ICM logo can be seen in the righthand window at 661 Congress Street.

The museum’s public rebirth will be visible in the 500 square feet rented at the rear of Michelle Souliere’s The Green Hand Bookshop.

The International Cryptozoology Museum is located at 661 Congress Street. It is right next to Joe’s Smoke Shop in the large Trelawny Building, which was built in 1909, in the midst of Portland, Maine’s Arts District.

The excitement generated by the ICM opening has been overwhelming. I have been happy to be embraced with positive local media attention.

The Grand Opening will take place on First Friday, November 6th, 2009, when there shall be an open house from 5:00 pm to 9:00 pm. The ceremonial ribbon cutting will happen at 6:00 pm, with Representative Herb Adams presiding and honored guests, dedicated docents and volunteers acknowledged. Needless to say, the public and media will be invited and in attendance.

Antipasti is being donated by Ricetta’s and Scottish shortbreads by Caleb’s Cookery.

At the Grand Opening, I am pleased to announce that an old friend, the historically significant Bigfoot artist and researcher Jim McClarin will make a rare public appearance to assist in kicking off the museum’s events.

Jim McClarin began his Bigfoot investigations in 1963, going on early expeditions from northern California to Alaska. McClarin is famous for carving the very first Bigfoot statue (located at the corner of Highways 96 & 299 in Willow Creek, California).

You may know of Jim because of his browridge of Bigfoot and his appearance in a famous piece of film. 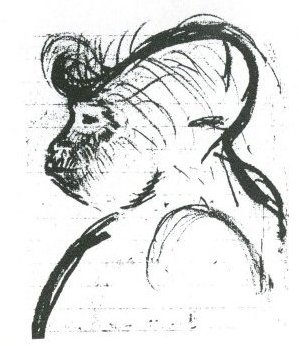 Field-sketch of the head of a female Sasquatch by Ivan T. Sanderson, under the direction of Albert Ostman. (This was misidentified as a “male Sasquatch” originally in Sanderson’s Abominable Snowmen: Legend Come to Life, 1961.) 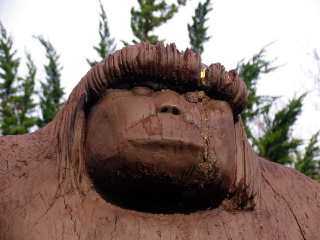 The curly description by Albert Ostman, from his 1924 sighting, was the inspiration for Ivan Sanderson’s drawing, and thus of Jim McClarin/Willow Creek Bigfoot statue’s browridge (above). The brow of the Albert Ostman Old Woman Sasquatch is shown in this drawing by Roger Patterson (below), compared with the Bluff Creek Bigfoot filmed at Bluff Creek in 1967. 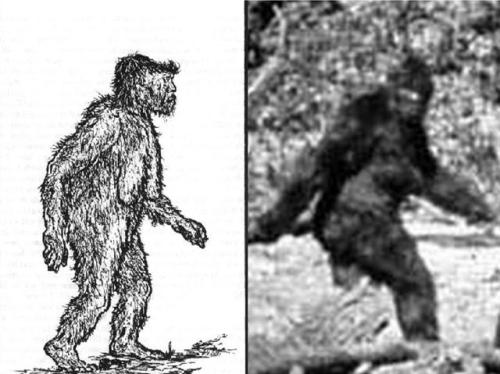 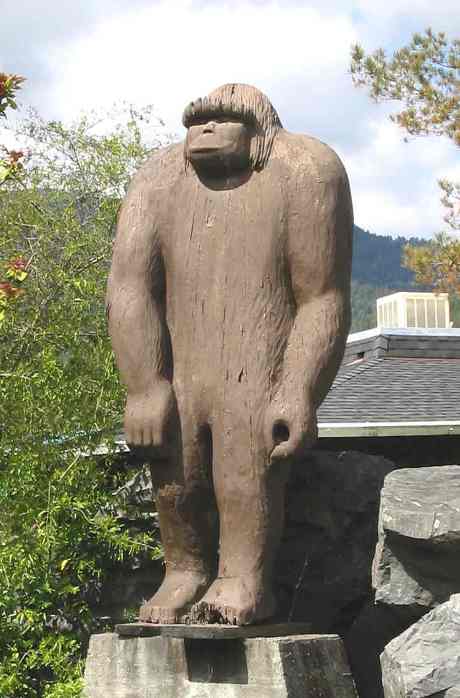 Back in the 1960s, California Bigfoot researcher Jim McClarin dubbed the unknown hominoid Sasquatch/Bigfoot with the term “Manimal,” and then produced the outstanding but short-lived “Manimal Newsletter.” Jim would become famed for his field research with John Green at the filmsite and his carving of the Willow Creek Bigfoot.

Green writes on page 124 of his Sasquatch: The Apes Among Us (1978): “At one time I was certain that the creature was several inches taller than Jim (at 6 ft. 5 1/2 ins. in his boots, 180 lbs.), particularly since it is more stooped. Now I am aware that it is possible to line up some frames so that Jim appears to be as tall or even taller.”

Jim McClarin (above, left), as filmed by John Green, is compared to the Bigfoot, in situ, at Bluff Creek, California, as filmed by Roger Patterson.

Jim and I, following direct paths and in varied decades, found ourselves moving from California, both ending up in New England. In 1994, in New Hampshire, Jim McClarin became the most recent Libertarian elected to a state legislative slot, serving for two terms, and then deciding to devote himself more fully to his love of Coleoptera and Hemiptera photography.

We have remained friends and correspondents, from those Bigfoot days. I was extremely happy to learn from Jim McClarin that he would be one of my Guests of Honor at the Grand Opening of the world’s first public cryptozoology museum during the “First Friday” celebrations of November 6th, 2009.

The other confirmed Guest of Honor and Master of Ceremonies will be District 119 Democratic Representative Herbert Adams, who represents the Parkside and Bayside neighborhoods of Portland, which include the most densely populated and ethnically diverse square mile in Maine. More than 40 languages are spoken in his district, to which he nows adds Bigfoot. This district is the new location of The Green Hand Bookshop and the International Cryptozoology Museum in Portland’s thriving Arts District. Rep. Adams previously served in the Maine House of Representatives during the 114th through 117th Legislatures, and then returned to serve in the 121st Legislature, four terms ago.

Rep. Adams was chosen by Newsweek Magazine in 1990 as “One of Fifty Americans Who Made a Difference.” He has been seen on various PBS, A&E and History Channel shows about Maine and American history.

Herb was an early reader of Mysterious America, becoming a follower of my works, as well as the writings of Michelle Souliere’s Strange Maine Gazette. Representative Herbert Adams will be reading two State of Maine Proclamations, one honoring The Green Hand Bookshop and the other discussion the unique, world’s first International Cryptozoology Museum.

Join the BCSCC and other groups and individuals in supporting the International Cryptozoology Museum as it opens publicly in downtown Portland, Maine.

Thank you, and come visit the museum at 661 Congress Street, Portland, Maine 04101, during the Grand Opening of 2009!! This educational/scientific/natural history museum is not a 501(c)3, and thus survives from support from friends like you, not grants. Your donations are greatly appreciated.