You are here: Home / The Bigfoot Filmography

The Bigfoot Filmography: Fictional and Documentary Appearances in Film and Television 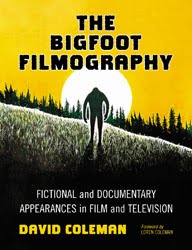 “The book was written over a year and a half of research and interviewing, but actually, much longer, in the sense that I have been a life-long Sasquatch film fan and never stopped ‘researching’ the Bigfoot films since about age 8 or so. It was weird, because, in order to write about the Bigfoot genre, you had to first define exactly what is and isn’t a ‘Bigfoot movie’, per se. So in this sense, I was lucky enough to be able to write about a childhood fascination AND help define a new genre in film. That’s a lucky one-two punch I’ll probably never see again as a published writer, odds are.” ~ Dave Coleman

The “Sasquatch” film genre, devoted to the legendary and notoriously elusive creature also known as Bigfoot, and its Himalayan counterpart, the Yeti, is the focus of this illustrated reference guide. Here is a fascinatingly detailed look at the cinematic history of Sasquatch, from the earliest trick films of Georges Melies to the most up-to-date CGI efforts. Critical insights regarding the genre’s development are offered, along with an exhaustively researched filmography that includes every known film or television appearance of Sasquatch, Bigfoot and Yeti in both fictitious and documentary formats. Included are in-depth interviews with such filmmakers as Kevin Tenney, Adam Muto, Ryan Schifrin, Tim Skousen and Michael Worten, as well as reproductions of rare movie stills, posters, lobby cards and behind-the-scenes production photos. Renowned cryptozoologist Loren Coleman provides an insightful foreword to the text.

David Coleman has written screenplays for such Hollywood talents as Michael Douglas and Philip Noyce. An independent film distributor and author of numerous magazine articles, he is also the creator of the videostreaming website BijouFlix.

Foreword by Loren Coleman (who is not related to David Coleman, btw, and tags his inspiration for venturing into cryptozoology to his March 1960 viewing of Half Human).

Not Yet Published, Available Fall/Winter 2011

“This must clearly be regarded now as the most significant book ever authored on the genre of Bigfoot/Sasquatch and Abominable Snowmen/Yeti films! This takes us far beyond Snowbeast and Harry and the Hendersons into the great archives of motion pictures and documentaries known and nearly unknown on hairy hominoids.” ~ Loren Coleman

An in-depth survey of Cine du Sasquatch, the book includes reviews of every Bigfoot t.v. and movie, rare photos and poster reproductions, and interviews with key filmmakers in the genre.