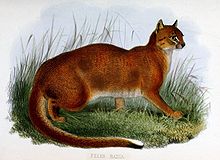 Breaking news out of Malaysia is that an extinct felid species has been spotted, leading to speculation that it has been rediscovered. The beautiful cat is one of the smaller wild cats, but the finding of it is no less remarkable than the appearance of other midsized new species.

Ian MacKinnon of The Telegraph in London is reporting that the Bornean Bay Cat, last photographed in 2003 in Lanjak Entimau wildlife sanctuary in southern Sarawak, and declared extinct, has been spotted again.

“Three pictures showing two or three of the Bay Cats were taken [in 2009 and 2010, but just released] in the northern highlands of Sarawak state in Borneo by researchers working for the forestry department,” noted MacKinnon.

Nearly everything that is known about this cat is based on just twelve specimens, the first of which was collected by Alfred Russel Wallace in 1855 in Sarawak. A total of seven further skins surfaced over the following decades, but it was not until 1992 that a living specimen was obtained, and there were no photographs of the animal until a second living specimen was captured in 1998.

Photo by Jim Sanderson, via Wikipedia.

Despite what the Telegraph says about the cat being “extinct,” the Bay Cat has been only recently reclassified as “endangered” by the IUCN in 2005, after being classified “data deficient” only ten years before. Now that the cat is fully protected over most of its range, CITES has recently placed the Bornean Bay Cat on Appendix II, due to lack of data. There are only fifty known to be left in the world.

Although on paper Borneo has 25 wildlife reserves, only three are actually in existence, with the others only proposed. All of these reserves have been encroached upon by human settlement and logging. Unfortunately local trappers and animal dealers are also well aware that foreign zoos and breeding facilities will pay US $10,000 or more for a live animal. There are no Bay Cats officially in captivity.