You are here: Home / Exclusive from Josh Gates on Yeti Tracks 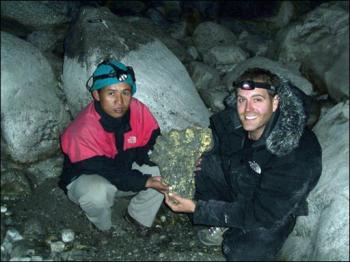 On this way back from Nepal, Josh has deplaned in Zanzibar and written a quick report for us here.

Meanwhile, my coauthor Patrick appeared on Fox National News to talk about our field guide’s sense of these new Yeti reports in the broader sense of the Abominable Snowmen accounts from the area. (I had to decline the appearance due to emergency dental surgery that had been prescheduled. Time for a nap for me, but I wanted to post these important breaking developments.)

Here is my take on things for your Cryptomundo readers:

My team and I have arrived here after a long but amazing two weeks of research in the Himalayas in search of the truth behind the Yeti legend.

I’m very excited about our time in Nepal. The general Western image of the Yeti is a narrow one (the abominable snowman), and to have the opportunity to experience the diverse and profound views of this animal from the varying perspectives of the Nepalese people is a discovery in and of itself.

Both feared and revered, there is no doubt in my mind that a great number of people, often separated by vast geographical boundaries, are having real and fundamentally similar experiences in the Himalayas that have not been fully accounted for.

As to whether or not the Yeti is real as we envision it, I think it’s more than safe to say that with thousands of years of history and legend surrounding this creature, it’s a complicated task to separate the zoology from the mythology, but that’s exactly what needs to be done.

We are all overwhelmed and excited at the discovery of this print and look forward to having it analyzed by specialists who should have a chance to weigh in on this issue. More than anything, I think this print reminds us that beyond the legend, there is something very real here that needs to be more fully explored.

Our team has, for the first time, documented the discovery, casting, and extraction of a large, unexplainable print – a process which will allow our viewers to become a part of our exploration and get them engaged with the search for one of the most enduring mysteries of the cryptozoological world.

In terms of the assertions that the print bears a striking resemblance to the one discovered in Johor, Malaysia, it does not. There are a few similarities that are worth noting: The splayed toes and wide ball of the foot are similar to the Johor print. However, it’s there that the similarities end.

One of the fundamentally troubling things about the Johor print has always been that, anatomically, it’s difficult to account for. The large toe is strangely jutted out to the side, and the general curvature of the foot seems to be almost reversed with what we would expect.

Josh Gates is shown above with the Yeti footprint cast, dated December 1, 2007, from his Nepal expedition.

This print is smaller and, to me, appears to be a more viable looking. Also, as it was found in a series – there are two additional impressions which, in situ, show clear signs of weight distribution and movement across the muddy expanse. Once we’re able to present the series of prints and show how they were discovered, I think most of your readers will agree that these are uniquely different than the single print found in Malaysia.

On a separate note, if a hundred humans stepped in the same track of mud, most of the prints would look largely the same. When we took the Johor print to a specialist in evolutionary morphology, I was amazed at the number of similarly featured prints in his lab. Having said that, this is a unique looking print. The few photos that have been released of it do not do it justice.

It’s also important for me to add that the routing of our investigations in the Himalayas were largely improvised, based on eyewitnesses and experts and that, as the print was first spotted by one of our Nepalese support crew, the idea that the prints were fabricated by someone in advance of our group is, as we see it, not a viable explanation.

We were in a very remote area and chose the river valley that we trekked down in the moment, which would not offer anyone the time to pull off what would be an elaborate hoax. Also, we start our cameras at the beginning of the night and roll continuously – fully documenting our trek and discovery.

I hope this sheds a bit more light on things and we look forward to being in touch soon with more information from the field.Cheers, Josh.