You are here: Home / The Short History of Blobsquatch

The Short History of Blobsquatch 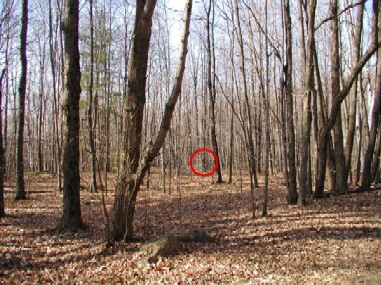 Ask yourself, is this a blobsquatch or not?

“Blobsquatch” is specifically the object in a photograph of a supposed Bigfoot or Sasquatch that has a lack of definition and detail, an illusion created by a play of light within an often unfamiliar natural environment. It is literally a “blob” (an indistinct shapeless form) that may or may not, but probably is not, a Sasquatch.

The blobsquatch “creatures” seem to be shadows in the trees, dark spots in the tall grass, light-colored objects on trails, or crossing branches in the forest that assist people’s imaginations in “seeing” a Bigfoot (when one might not be there). One defunct group defined “blobsquatch” as “anything in a picture or film which might be possibly mistaken for a Sasquatch such as a tree stump, a large rock, [and/or] a shadow.”

While some measure their world with a very rigid black/white yardstick in excluding all blobsquatch photos, of course, someone else’s once and a future blobsquatch could be a really bad picture of an ill-defined Bigfoot in the woods. Thus, one person’s expunged blobsquatch could be another individual’s “initial” piece of potential evidence. The reaction to any one specific blobsquatch remains in the eye of the beholder.

While I and others at Cryptomundo have discussed blobsquatch, the term, before, I thought it would be interesting to track down the biographically significant history behind the word. After all, for years Bernard Heuvelmans got the credit for inventing the word “cryptozoology,” until we all have to do a bit of revisionist rewriting to include Ivan T. Sanderson in the picture, as he independently coined “cryptozoology” before Heuvelmans. Why not make certain we have it right, from the beginning, about “blobsquatch”?

So, who invented the term? 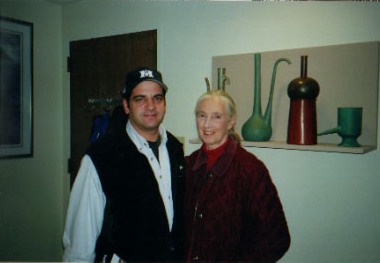 The term “blobsquatch” was first coined online at the Bigfoot Forums by Vito Quaranta (above shown with Jane Goodall), and then it was employed extensively by Ray Randell (directly below), who was instrumental in promoting the term’s growing online popularity, throughout 2002-2003. 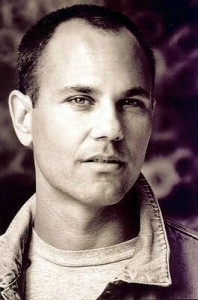 Next came the first known public lecture appearance of the word on September 14, 2003. On that date, Alton Higgins (below), at the Willow Creek Symposium, flashed the term up on a screen and spent several minutes analyzing various blobsquatch images.

Higgins expanded what he presented at Willow Creek, and published his March 21, 2004 revised paper, which can be found online here: “Evaluating Purported Sasquatch Photographic Evidence”.

Higgins wrote within that paper: “Any photo requiring equal parts interpretation and imagination (photos sometimes characterized as ‘blobsquatches’) should be discounted.”

The term blobsquatch has been retro-extended to past photographs that are not specifically about North American Sasquatch/Bigfoot. One such instance is the infamous Woolridge “Yeti Rock” image, which was at first thought to be an Abominable Snowman, but later found to only be a rock. It clearly is a precise example of a blobsquatch since the return-springtime investigation of the “unknown hominoid” in the photograph lead to the discovery the “Yeti figure” was made by a geological formation. Nevertheless, the March 1986 photograph continues to live on as “evidence” for Yeti through its surprising reproduction in newly reprinted books, and via incorrect statements such as on the Outdoor India site, which says in “1986, an athlete, Anthony Woolridge, was witness to the Yeti for 45 minutes.” 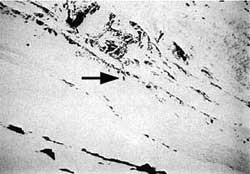 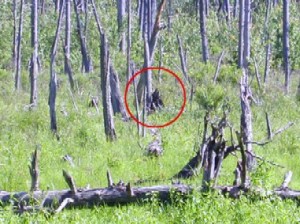 Otherwise, most of the blobsquatch photos, such as this one and the other at the top, are merely blurs in the woods that tell us little about what was there.

Today (November 25, 2006), blogsquatching (this new term is the use of web logs to spread information on unknown hairy hominoids such as Sasquatch, Yeti, and Yowie across the internet) often freely shares and comments on the latest examples of blobsquatch images.