You are here: Home / Russian Hominologist Dmitri Bayanov, 88, Has Died 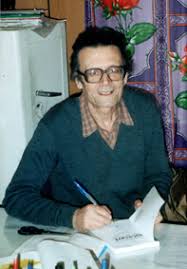 Early on the morning of June 4, 2020, the world of hominid research was shocked with breaking news…

The renowned Russian hominologist Dmitri Bayanov, 88, passed away, on June 1, 2020. He had been in failing health for some time, and had suffered from a short period of congestive heart failure in recent months. (An earlier date of death of May 28, was corrected and clarified by Dmitri’s son, with communications with the hospital. Thanks to Igor Burtsev for the revision.)

Dmitri Yurevich Bayanov was born on March 18, 1932, in Moscow, Russia. (Photo above by Daniel Perez.) 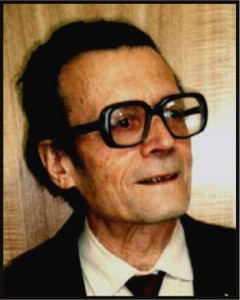 Chris Murphy posted this image of Bayanov on the back cover of the last book they produced together. Dmitri Bayanov expressed pleasure in seeing it used.

In 2019, Bayanov’s last book, The Making of Hominology: A Science Whose Time Has Come was published. Christopher Murphy served as editor. 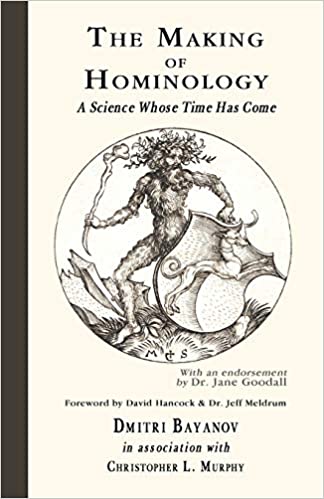 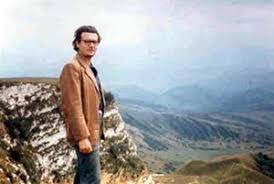 Bayanov theorized that the discovery of relict hominids would be a rediscovery of the hominids known in the 18th century as Homo troglodytes and Homo sylvestris.

Bayanov was the science director at the International Center of Hominology. His cryptozoological career focused primarily on the study of relic populations of hominids, including the Almas and the American Sasquatch.

Bayanov originally graduated from a teachers school in 1955 with a major in humanities. He worked first as a teacher and later as a Russian-English translator. 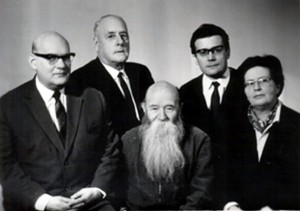 The founders of hominoid research in Russia are (left to right): Boris Porshnev, Alexander Mashkovtsev, Pyotr Molin, Dmitri Bayanov, and Marie-Jeanne Koffmann. Photograph is from January 1968. 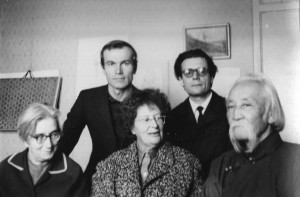 After studying under such individuals as Professor B.F. Porshnev and P.P. Smolin, Chief Curator of the Darwin Museum in Moscow, Bayanov took part in Marie-Jeanne Koffmann s expedition in search of the Almas in the Caucasus Mountains. He later made reconnaissance trips into the same region on his own. Dmitri Bayanov served as an active member of the Relict Hominoid Research Seminar at the Darwin Museum, until his death. His involvement with the group began in 1964 and he became its chairman in 1975. He was also a founding board member of the International Society of Cryptozoology in 1982, and served on its Board of Directors until 1992. 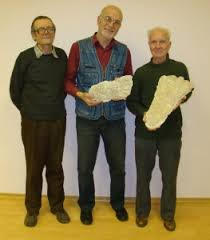 From left to right, Dmitri Bayanov (the creator of the word “hominology”), Igor Burtsev (holding the common Almas-like print found in the Pamirs, this example from 1979), and Vadim Makarov (with the long four-toed footcast of a True Giant from the Pamirs, 1981). Photograph by Igor Burtsev, November 19, 2010. 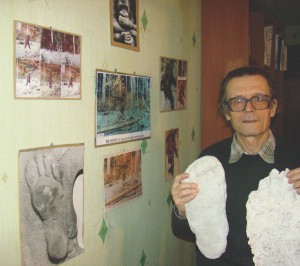 Bayanov is credited with coining the terms hominology and hominologist in the early 1970s to describe the specific study of unknown hominoids and those who study them. Bayanov himself noted that “Hominology is a branch of primatology, founded in the middle of the 20th century in science’s ‘no-man’s land’ between zoology and anthropology.”

He was among the researchers who studied the Patterson/Gimlin film and found it authentic.

In Christopher L. Murphy’s 2009 book, Bigfoot Film Journal: A Detailed Account and Analysis of the Patterson/Gimlin Film Circumstances and Aftermath, Dmitri Bayanov is credited with being the individual to have coined the nickname “Patty” for the subject of the October 20, 1967 footage. 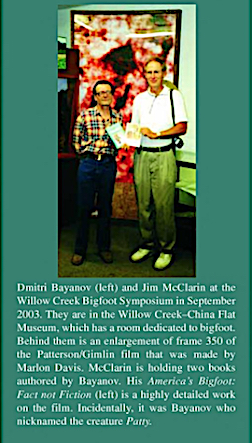 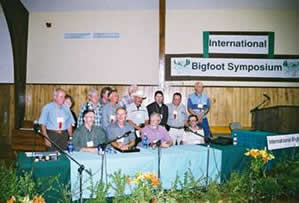 In the concluding remarks of Bayanov’s presentation at the International Bigfoot Symposium in Willow Creek, California (September 12-14, 2003), he said:

I think that one of the great scientific results of the 20th century was the discovery of relict hominids (homins, for short), popularly known as Abominable Snowman, Yeti, Yeren, Almas, Almasty, Bigfoot, Sasquatch, etc. Actually, it was a re-discovery by hominologists of what had been known to western naturalists from antiquity to the middle of the 18th century, when wild bipedal primates were classified by Carl Linnaeus as Homo troglodytes (i.e., caveman) or Homo sylvestris (i.e., woodman, forestman). As for eastern scholars and rural populations in many parts of the world, they have always been aware of wild hairy bipeds, known under diverse popular names. Hominology is primarily championed as a unique and necessary field of study by a handful of Russian scientists. They argue that resistance is based on fear, that is, that recognition of hominology would facilitate documentation of a relic ‘homin’ by making funding available. Documentation of a species such as the Sasquatch would, in turn, precipitate an upheaval of long-standing evolutionary and paleoanthropological theory, which explains in large part (in their view) the resistance to hominology and related efforts. 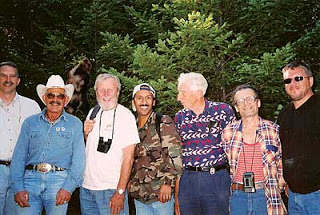 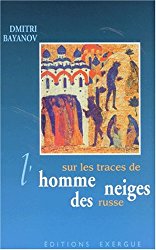 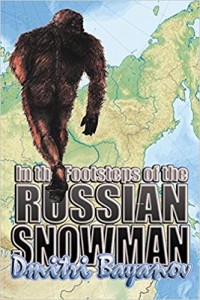 In the Footsteps of the Russian Snowman (2015) 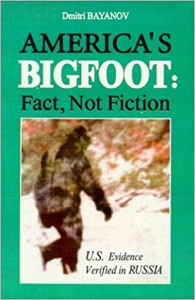 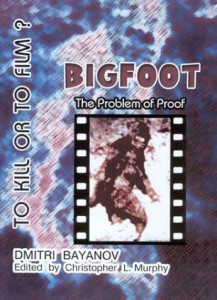 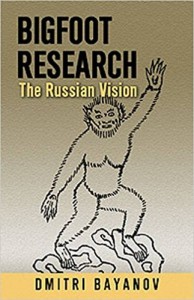 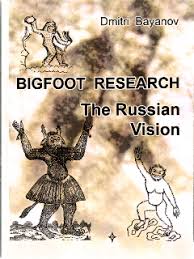 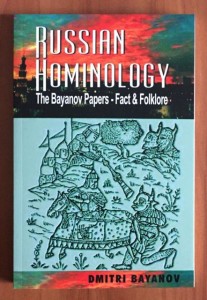 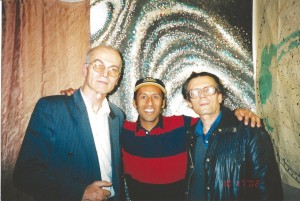 The following is a statement from Bayanov shared with me in 2011:

The Problem of Acknowledgement of Hominology

by the Scientific Community by Dmitri Bayanov

On behalf of Russian hominologists I greet our foreign friends and colleagues, as well as other guests of this conference.

What are the meaning and goals of efforts exerted by hominologists? First of all in achieving recognition by world science of the existence of living relict hominids. (Explanation why I use the term “hominid”, not “hominoid,” would take time, so I skip it).

Hominologists acknowledged the existence of these primates in the second half of last century and described their discoveries in many books and articles.

But fundamentalists of academic science as a rule do not read our books and articles because they “know” (in inverted commas) that what is written in them just cannot be. They still believe that the Patterson-Gimlin authentic documentary is a fraud.

What is the reason for this anti-scientific situation in world science? I will name three outstanding reasons.

Reason number one is that, due to its highest volume of knowledge, world science has become highly specialized, while it is said that “a specialist is like a swollen cheek: his fullness is one-sided.”

Study of hominids [which is] different from us has long been conducted by paleoanthropologists who find and examine fossil material. The question of living non-Homo sapiens hominids is beyond their knowledge and horizon.

The scientific community believes the blind faith of these fine but narrow specialists that all such hominids died out at least tens of thousands of years ago. And this is not surprising, for evidence here is skeletal remains of long dead, not presently living specimens.

In the ancient world, and even later, when the number of sciences was smaller, when scientists were philosophers and  encyclopedists, they well knew of the existence of wild hairy bipeds whom they called troglodytes, that is “cavemen”. One of such philosophers and lumenaries of natural history was Carolus Linneaus, the author of the terms Homo sapiens and Homo troglodytes. For the latter he also used the terms “silvestris” and “nocturnus”. Thus Linnaeus is the forefather of our direction of science.

Anthropologists are still unaware of the remarkable historical fact that the central and pretentious term of anthropology – Homo sapiens – appeared in science just in contrast to Homo troglodytes, the Caveman, whose existence was known to naturalists of antiquity and the Middle Ages.

Reason number two is that the abundant biological information in folklore and mythology about these close to us bipedal primates is regarded by academic science as nothing more than popular fantasies based on superstition. In Russian folklore and demonology, the main term for these beings is “leshy” (forest man). The Nepalese word “yeti” used by our journalists instead of the Russian name “leshy” is a misnomer.

Reason number three is in the unique nature of relict hominids, in their special (including sexual) relations with people of our species, in their extreme elusiveness and great parapsychological abilities.

Extreme secretiveness is also typical, as a rule, of people who establish and maintain friendly contact with these beings. In recent years however there have appeared several exceptions to this rule, which have brought most valuable results that will be reported I hope by my colleagues.

The reasons I named are closely interconnected and strengthen one another.

Modern world science is a conglomerate of numerous sciences, which lacked however a discipline devoted to the study of relict hominids, and thus their existence happened to be beyond the scope of the scientific community, and this despite the fact that the existence of Bigfoot/Sasquatch, for example, is well known to the US government. The reasons why this knowledge is not becoming official and public are also well known in America.

In 1999 I wrote a letter to Bill Clinton, then US President, and sent him two our books: In the Footsteps of the Russian Snowman and America’s Bigfoot: Fact, Not Fiction– US Evidence Verified in Russia. In the letter I asked him to pay attention to the Bigfoot problem and defend good names of Roger Patterson and Robert Gimlin who are constantly accused of having presented a fraud as a documentary film.

I received the following reply from the US President: “Thank you for your kind gift and for sharing your thoughts and concerns. It’s important for me to know your views. I’m glad you took the time to write.”

Alas, he did not do what I asked him for.

In short, relict hominids were unknown to science because there was no science to know them. Today we have such science.

Since deep specialization of modern science is inevitable, the problem had to be resolved by creating one more special discipline – hominology, devoted to recognition and study of relict hominids.

The founding father of hominology in this country was Professor Boris Porshnev, historian and philosopher (life years 1905-1972). In my view, it is just because he was a humanist philosopher that the problem of man’s origin excited him so strongly.

After half a century of our efforts under the hard conditions of self-funding and ostracism on the part of the scientific establishment , a few words on the situation right now.

Our North-American colleagues have succeeded at last in taking clear videos of Bigfoot/Sasquatch, in addition to the Patterson-Gimlin documentary film. This happened thanks to the exceptions among Bigfoot befrienders that I mentioned earlier.  They have also obtained DNA samples of these hominids, with the analysis to be published in a scientific journal.

We wholeheartedly congratulate our North-American friends on these outstanding achievements. They give hope that the reality of relict hominids will soon be generally acknowledged.

Besides, acknowledgement of relict hominids and hominology will raise a most important critical question of the quality and perspectives of modern world science, including the question of its lunatic militarization.

In conclusion we express heartfelt thanks to the Darwin Museum for actively supporting our activities from the very beginning in the middle of last century, for literally providing the roof over our heads.

We also extend our deep thanks to Aman Tuleyev, Governor of the Kemerovo Region, for his unexpected, very brave and many-sided support of our investigations at the present time. This is most fortunate and will be recorded in the history of science.

Thank you for listening.

Cards of condolences can be sent to

Chris Murphy’s tribute published on the afternoon of June 4, 2020. 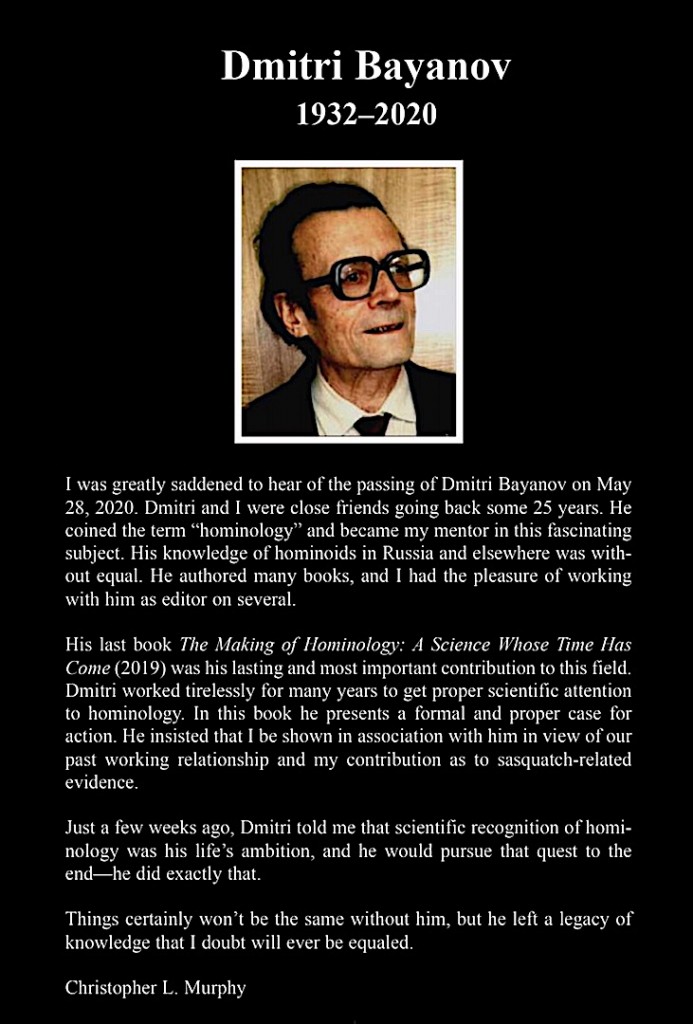 Appreciations to Russian Igor Burtsev and Canadian Chris Murphy for sharing the initial news. Thanks to American Daniel Perez, Burtsev, and Murphy for photographs.