Drew Vics and his friends were standing around talking about cryptids and microbrews when they founded a whole new form of higher intellectual understanding of the universe. They have combined an interest in cryptozoology with a love of home brewing and the results are cryptobrewology. 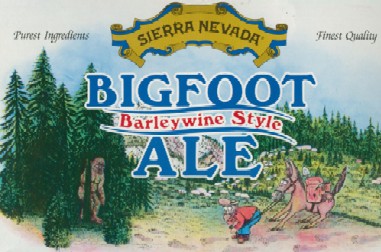 Vics’ new study is more about sightings of rare beers, including Sierra Nevada’s famous barley-wine style ale, Bigfoot, but there is a subform of their pursuit that, for me, has been totally about cryptozoology and a little about the beer.

I’ve been gathering very specific cryptozoology-oriented empties, as cultural artifacts, for decades (despite the fact I don’t drink). These include bottles and cans for Bigfoot Ale, Yeti Ale, Shaftbury Cream Ale (with an image similar to Ogopogo in the midst of BC), and, of course, Kokanee beer (with a tiny Bigfoot image on skis coming down a BC mountain). The collection includes, as well, a neat plastic Kokanee cup with Rene’ Dahinden’s image on it, and around its back, info about Dahinden inside a picture of a Sasquatch plaster cast.

I also own a set of four glasses from the Lang Creek Brewery of Marion, Montana, with a beautiful cryptid illustration etched on the glasses, linked to the product’s name, Flathead Lake Monster Ale Amber.

But there remains one prize that is an elusive stranger to my collection. It is a beer with a name-game cryptozoology story behind it.

Charles Wetzel, at the age of 70, was at his Platte River cabin, near Grand Island, Nebraska, on the 28th of July, 1958, when he observed a mystery kangaroo that was seen but never caught. Wetzel was operating a brewery in Grand Island at the time of his sighting. He was so obsessed with his bizarre experience, he named one of his brands “Wetzel Kangaroo Beer.” With the arrival of eBay a few years ago, I contacted and talked to beer can and bottle collectors in Nebraska. They have seen the Wetzel beer collectible, they tell me, but it remains absent from my crypto-collection within this special subfield of ritual objects.

Another Charles Wetzel, of course, saw a strange leafy Bigfoot or Lizardman creature near Riverside, California, in 1958, that has become famed in cryptozoological archives.

Anyone have an extra container that once held Wetzel Kangaroo Beer in your collection?