Do you remember December 5th in 2002? On that day, The Lord of the Rings, the first of a successful film trilogy, was released. Roone Arledge, an American sports and news broadcasting genius, who created many programs still airing today, including Monday Night Football, ABC World News, Primetime, Nightline and 20/20, died.

Additionally, an important article was published in the Seattle Times, written by Steve Young, entitled “Lovable Trickster Created a Monster with Bigfoot Hoax.”

The story told of how a recently deceased road construction company owner, Ray Wallace of Washington State, appeared to have been behind hoaxing Bigfoot footprints in the Pacific Northwest. His family members told the reporter that they found the wooden tools he used to create his alleged “pranks” in his possessions. (As it turns out, other of Wallace’s “wooden fake feet” were revealed later, see below, to be owned by other relatives.)

(Photo by David Carkhuff, who interviewed the Oregon Wallace relatives.)

The well-known trickster Wallace became the focus of media attention for weeks and months later, in which he was blamed for every Bigfoot track ever found in California, Oregon, and Washington State, to being the author of the Patterson-Gimlin film, with his wife in the suit. (The fake Bigfoot film Wallace had made was created in the 1970s, however.)

As many of you know, I consider there is reality in the notion that Ray Wallace had a central role in promoting various incidents of hoaxing at Bluff Creek in 1958-1960, and later, it became well-established he had, beginning with Young’s article. Faking occurred, no doubt about it. This is not to say that the mistake that the media made in 2002, to declare Wallace as “Bigfoot’s Father,” was helpful. In 1958, at Bluff Creek, actual footprint evidence for a large unknown hominoid was found, it seems certain. But then, after Jerry Crew’s initial encounters, Ray Wallace hoaxed various easily-found tracks and supported fictional scenarios by his relatives and friends.

In November 2001, I told Steve Young at the Seattle Times to talk to the Wallace family immediately after the death of Ray Wallace. I had a hunch. Young discovered new details that I documented in Bigfoot! (2003), looking behind Wallace’s trickster stories.

Death can be a harsh revealer of realities, and yet truth is a worthy objective within cryptozoology. I did not fear what would be uncovered when I talked to Young on the phone, for a house cleaning is always welcome, as the better database remaining would be helpful for finding new species. I am not one to turn a blind eye to the fakes and hoaxes that contaminate the data, but instead, want to clear it out and examine the best of the best evidence. (Come on! Square toes? We all should have seen those from a mile away! Primate – real humans, apes, Bigfoot – toes are ovals or near circles, not square.)

That Wallace “invented” Bigfoot, or that every facet of his involvement should be believed by all in the media goes beyond any reasonable thought. When newspapers and news organizations begin to swallow – hook, line, and sinker – all parts of the twisted tales from a known hoaxer, or those from a claimant without full proof, we run the risk of inhabiting the borderline area that spreads poison beyond the parameters of any original story. Why are all details from the one telling the tall tales to be so fully now taken as truthful? Why are stories from a hoaxer to be believed over the eyewitness to a Bigfoot, for example?

For the media to state with a straight face that there was a grand conspiracy on the ground in Bluff Creek during 1958, which included the local newspaper office, must be viewed as skeptically as some of Wallace’s old yarns about Bigfoot guarding gold mines or that he had seen UFOs a total of 2000 times. Indeed, the gullibility and journalistic hoax – the one about Wallace being the “father of Bigfoot” – continued globally long after it should have, into the present, is downright remarkable.

The media is a fickle friend of cryptozoology, and we should be careful. Oftentimes, the media is the way we might hear about news cases, but in the case of the Wallace fiasco, it was amazing to see the story become so global. It boggles the mind that the media can move from reporting, with all seriousness in 1958, about new evidence of this thing called “Bigfoot,” to then establish a position of righteous indignation in 2002. Have we learned anything from this? No, for in 2008, the supposed upcoming news conference about a Georgia Bigfoot body was “believed” by the media. Just as rapidly, the news organizations turned on Bigfoot research, after the Georgia “body” turned out to be a rubber suit.

Now, ten years after the Ray Wallace revelations, the unfortunate “jumping the gun” leaks about the “Bigfoot DNA findings” look all too familiar. If Igor Burtsev and Melba Ketchum felt that years of promises, promotions, and pitches were the way to good science, I’m afraid I’d have to disagree. Media creates madness in people who put their trust in the projected presentations. Didn’t they know that?

The Wallace story is a cautionary tale. It is one worth carefully studying. I did just that five years after the Wallace story broke. I would track how the Wallace matter unfolded in my highly-researched contribution, “Bigfoot’s Bogus Burial: the Media and Other Wallace Myths,” in Greg Taylor (ed), Darklore Volume 1, (Brisbane, Australia: Daily Grail Publishing, 2007, pp. 95–109).

Would I talk to Young, whom I encouraged to go interview the Wallace family, if I had it to do over? Yes, of course. Fakery not revealed is a lie that lives on into the future. Cryptozoology, in reality, is not about continuing and supporting the unknown, but discovering what we can do to make facts, data, and species known. 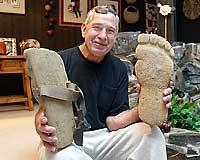 (All photos, except for the David Carkhuff-identified one: David Rubert Photography – used with permission)

The evidence Wallace left behind of his hoaxing is still widespread in the literature.

Birth of Bigfoot
Not a Wallace-created impression.