You are here: Home / The Top Ten Cryptozoology Stories for 2007

The Top Ten Cryptozoology Stories for 2007

The Top Ten Cryptozoology Stories for 2007

From Bigfoot to Yeren, and from dwarf killer whales to dwarf manatees, it was quite a year.

Welcome to this year’s top stories in cryptozoology. It wasn’t heaven during 2007 for the cryptids, but instead seemed to have been a year of reflection, mistakes, fakes, and a few new finds.

In the 1940s, the Scottish-born American zoologist Ivan T. Sanderson (photo with lemur) began using a word he coined, “cryptozoology,” to describe a new discipline of science that investigates hidden, yet-to-be-discovered large animals. In the late 1950s, after a decade of correspondence with Sanderson, Belgian zoologist Bernard Heuvelmans began formalizing “cryptozoology.”

Today, cryptozoology is to be found from academia to museum exhibitions, from new television series to tee-shirts.

My annual picks are cryptozoological events, which became newsworthy during 2007 (even though they may have happened in an earlier year).

Here is my top ten list of the cryptozoology accounts of most interest to the public, cryptozoologists, Bigfooters, fans, friends, foes, and the media during this year. They may not be the most remarkable but they are the ones that garnered the largest media reaction and greatest public discussions on our favorite topic for 2007:

Gordon Holmes, a 55-year-old lab technician, was at a lay-by about 70 feet above Loch Ness on May 26, 2007, when he captured digital video of what he said was “this jet black thing, about 4 to 5 feet (1.4 m) long, moving fairly fast in the water.” Adrian Shine, a Nessie skeptic, described the footage as among “the best footage ever seen.” The footage shows no points of reference to demonstrate scale.

At Cryptomundo, the film’s credibility was questioned early, due to Holmes’ past claims of filming black fairies. Many also wondered aloud if this video was nothing more than an otter swimming in the loch.

Nevertheless, media interest in Nessie and other lake monsters was extremely high in the wake of the Holmes video, which was broadcast on BBC Scotland on May 29, 2007, and on CNN on June 1, 2007.

In early September 2007, a brief Internet frenzy occurred regarding the 20-minute video of six Lake Tianchi Monsters in China. A closer look at the Chinese video seems to show probable waterfowl.

After 121 years, the mysterious taxidermy mount of the Shunka Warak’in (a wolf-hynea-like cryptid), from 19th century Montana, was found. The wolf-like creature prowled the Madison Valley, Montana, destroying livestock and reportedly letting out ungodly screams.

After being killed and stuffed in 1886, the taxidermy mount disappeared. In 2007, the body was tracked to the Idaho Museum of Natural History in Pocatello. It will be on display at Montana’s Madison Valley History Museum in May 2008. Hopefully DNA testing will finally determine this mystery candid-like species’ identity.

At Bluff Creek, California, an apparent female Bigfoot was filmed on October 20, 1967, by Roger Patterson, with assistance on his search from Bob Gimlin. Because this was the 40th year since that event, Bigfooters talked a great deal about the film in the last few months, attempted one gathering in California that was cancelled due to people not wanting to pay the high ticket prices, and quickly organized a celebration at Willow Creek. No one has proven the footage was faked, and during 2007, the merits of the footage were discussed frequently.

For more on the iconic imagery of Patty, plus clips from the footage, please see here.

In July 2007, the pictured animal was hit by a car and killed on Phylis Canion’s property, on Buenger Road off U.S. Highway 183 south of Cuero, Texas. Canion (holding the photo) had said she saw this “animal” for two years roaming her property. The immediate cry heard throughout the media was “Chupacabras” (sometimes incorrectly spelled without the “s”). Before the frenzy was over, tee-shirts had appeared on the scene.

In early November, the DNA results from tests run on the so-called “Chupacabras” by biologists at the Texas State University found the dead animal was a coyote (Canis latrans). In the end, the “Cuero Chupacabras” was only a mangy canid. 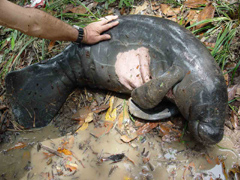 The year was filled with a number of new species being announced. In a paper entitled the “Dwarf Form of Killer Whale in Antarctica,” the first 2007 issue of the Journal of Mammalogy summarized findings that few paid any attention to. Meanwhile, media accounts of the six years ago reports of the giant peccary in Brazil, or the more recent discovery of a dwarf manatee (above) in the Amazon spread widely.

At Cryptomundo, other new species findings, from a new monkey in Uganda to a new clouded leopard in Southeast Asia, from new limbless amphibians in India to walking sea anemomes off the Aleutians, projected hopes for more cryptozoological surprises for the future.

Also, an extinct echidna was rediscovered, an extinct blind snake was found, the first Zanzibar coelacanth was caught, the first Sumatran striped rabbit photographed, and the first video footage of elusive Borneo rhinos was captured. It was a good year. (Compare that list to a couple missteps – a fake photo of the allegedly extinct-in-the-wild South China tiger and a hoax photo of a supposedly rediscovered parrot.)

Ro Cham H’pnhieng, 27, was discovered on the edge of the Cambodian jungle in January 2007, after she was caught trying to steal food left under a tree. She was seen with a hairy Wild Man, a Nguoi Rung. Reportedly, she had been kidnapped in 1989 by the wild people and taken into the jungle. Attempts to find the Nguoi Rung (below) were made, with no positive results. 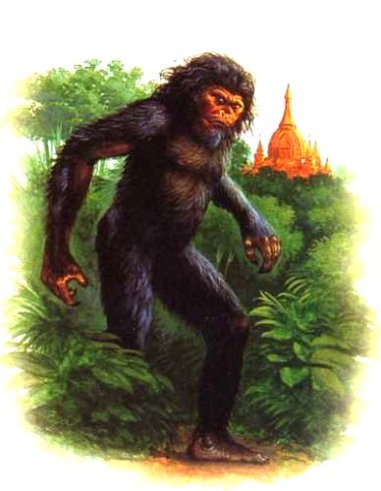 In October 2007, after Ro Cham H’pnhieng’s family tried to have her live with them again, after several incidents of her running away into the forest, she escaped for the final time, apparently to return to the Forest People. She had made her choice, her family felt.

During 2007, two down-to-earth field-oriented cryptozoology documentary series were broadcast on cable television. Both programs, each in their first seasons, received high ratings and good reviews.

The SciFi Channel’s “Destination Truth” was produced by the Mandt Brothers, and the History Channel’s “MonsterQuest” was produced by White Wolf Productions. “MonsterQuest’s” episode on “Sasquatch Attack” created quite a stir in the Bigfoot community. The program dealt with an apparent rock-throwing incident that occurred during the actual filming of the program. Furthermore, DNA tests were conducted on old blood and tissue samples left on screws said to have been stepped on by a Bigfoot.

The Mapinguary (pronounced MA-ping-war-E), the huge unknown anthropoid ape or the giant sloth-like monster of the Amazon, was in the news again in June and July 2007. New attention from The New York Times, revisited the topic early in the year, and spread to the UPI and NBC’s “Today Show.”

“It is quite clear to me that the legend of the Mapinguary is based on human contact with the last of the ground sloths,” said David Oren, former director of research at the Goeldi institute in Belém, at the mouth of the Amazon River.

The South American focus continued with the Centre for Fortean Zoology’s end of November excursion to Guyana to look into reports of the Didi and the overlap with the accounts of the Mapinguary.

This is one of the Yeren foot impressions discovered in November 2007.

New sightings of Chinese “Wild People,” two Yeren in Shennongjia, were reported on November 18, 2007. According to the eyewitnesses, the two Yeren were skinny and covered with black hair. The taller one was about 1.7 meters high and the other one was approximately 1.3 to 1.4 meters. On November 22, members of the China Association for Scientific Expedition took plaster casts of impressions identified as two “Wild Men” footprints left along the Licha River where the two mysterious creatures had been spotted.

With timing keyed to the 40th anniversary of the Patterson-Gimlin footage, two Pennsylvania trailcam photographs were released for maximum exposure labeled to indicate they showed a “juvenile Sasquatch.” The two images and an accompanying photograph of two bear cubs were reported to have been taken on September 16, 2007, by a Bushnell game camera placed in a Pennsylvania forest by an individual named R. Jacobs.

The “Jacobs Creature,” or “Jacobs Photograph,” as it was called, resulted in several ridicule-filled media reports and much debate within the Bigfoot community on the worth of the photographs. Cryptomundo noted they appeared to be of a “mangy bear,” and anthropologist Jeff Meldrum agreed, as did the Pennsylvania wildlife department. A few saw in the photographs a youthful Bigfoot.

Were other frames of the trailcam sequence being hidden from the public? Why were the photographs withheld for a month? What is the entire story of the Jacobs cryptid? At year’s end, many questions remain unanswered about the events surrounding the mystery photos. 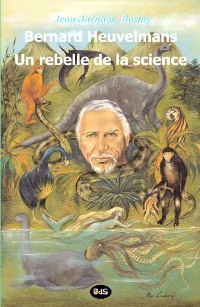 The biography of one of the “Fathers of Cryptozoology,” Bernard Heuvelmans, was published for the first time in 2007, in French. Jean-Jacques Barloy, who wrote the biography, “Bernard Heuvelmans, un rebelle de la science” (1st volume of the “Bibliothèque Heuvelmansienne,” Editions de l’Oeil du Sphinx, juin 2007) – Bernard Heuvelmans: A Rebel of Science – would win an award for his writings, the “Grand Prix de l’Imaginaire 2008″ (category essay). The announcement of the prize was made on November 3, 2007.

Plans are in place to have the Heuvelmans biography translated into English, and published in a forthcoming year.

As far as obituaries for 2007, the most prominent in cryptozoology was the death of Bigfoot researcher Archie Buckley, an early and significant member of hominology, a cornerstone founder of the Bay Area Group, the Sasquatch research collective of the San Francisco Bay area. Buckley died on June 18, 2007.

On the first day of 2008, I learned that an individual of significant in hominology had passed away, late in 2007.

Sadly, word reached me of the death of a figure important to the investigation of the Skookum Cast. University of Washington professor emeritus of anthropology, World War II veteran, consummate teacher, and beloved father, husband and friend of cryptozoology, Dr. Daris R. Swindler, 82, had passed away on December 6, 2007, and a memorial service was planned for late January 2008.

For a more complete obituary, see:

At the end of the year, Loren Coleman on Saturday, December 1, 2007, delivered his talk, “Introduction to Cryptozoology,” at 1:00 PM, at the American Museum of Natural History, New York City, New York, in conjunction with their then-current exhibition, Mythic Creatures.

Loren Coleman has been involved in cryptozoology since 1960. He is the author of over 30 books and hundreds of articles, appears frequently in documentaries, and is the director of the International Cryptozoology Museum in Portland, Maine.

Coleman may be reached via email at lcoleman@maine.rr.com