Bigfoot? Swamp Ape? Booger? Something is around. Footprints have been found.

Since at least the last week of May 2009, there have been a series of sightings of hairy hominoids in South Carolina. Chief Joe Van Parkman of the Columbia Police Department reported on May 29th that his department had received reports of a large bipedal creature being spotted around the area of the Columbia Waterpark.

“We are investigating this strictly from the viewpoint of public safety and that alone,” Parkman said. “My biggest fear is that someone might be trying to perpetrate some kind of hoax and could get hurt.”

The following footprint photo was taken of one of the tracks discovered.

Too bad there is no scale in this published Columbian print.

Of course, a track found might not have a thing to do with the sightings. I think this might be especially true since that footprint looks an awfully lot like a raccoon track to me (compare an example below). Just my opinion. 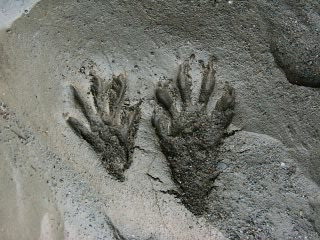