New photos are published exclusively here for the first time! They are emerging as possible further evidence for True Giants.

Vadim Makarov holds a remarkable cast of a True Giant track found over 30 years ago in the Pamirs.

Famed Russian hominologists, from left to right, Dmitri Bayanov (the creator of the word “hominology”), Igor Burtsev (holding the common Almas-like print found in the Pamirs, this example from 1979), and Vadim Makarov (with the long four-toed footcast of a True Giant from the Pamirs, 1981).  Photograph by Igor Burtsev, November 19, 2010.

In Central Asia an example of a footprint with consistent True Giant characteristics comes to us from the Gissar Mountains in the Pamir-Altai Range of Tajikistan. Tracks found in September of 1981 were 49 cm (19 in) long and showed four toes. A photograph appeared in the Moscow News weekly for November 22-29, 1981. It shows a cast of a long foot with four large toes of similar size. Next to the cast is a scale in centimeters (although the width of the cast is not clearly measurable because the photo was taken at an angle). Beyond the cast is a shod human foot. The photo caption identifies this cast as a footprint found by Vadim
Makarov.

As noted in this new book by Mark A. Hall and me, a taboo is being broken by publishing this contribution to the literature, as even the hominological establishment are in continued questioning of the True Giants evidence.

Igor Burtsev, for example, who is a well-known supporter of the Carter Farm scenarios, wrote me that in Tajikistan he occasionally met a man who described the shape of the footprint and claimed he knew the exact place where he faked it. As John Green has often said, there is always someone to step forward to claim they were the source of a hoax, to get their fifteen minutes of fame too. Indeed, the large footprints and larger than Bigfoot and Almas evidence are difficult for some to consider. But the challenge must be expressed, as it has been with hostile debunkers, have the doubting hominologists even read the total body of the evidence, yet. Of course they have not.

The Pamirs footprint with four toes found by Makarov is, nevertheless, supported by a few hominologists, and fits nicely in with other evidence noted in the new book True Giants. Will establish cryptozoologists and hominologists read the overall thesis before making their judgments about the concept? Or will they be guilty of the harsh skepticism and ridiculing debunking already apparent on some anti-cryptozoology forums and lists? 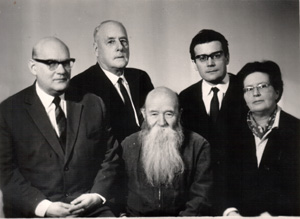 Veterans of the Russian Snowman Institute, associated with the Darwin Museum in Moscow: Porshnev, Mashkovtsev, Smolin, Bayanov, and Koffman. 1970.