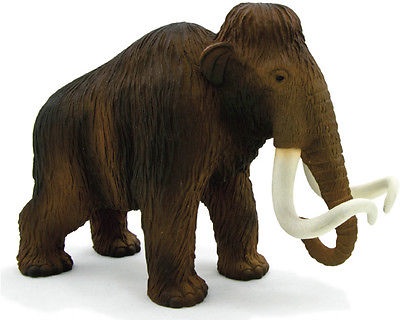 In November 2007, I launched a new on-going, irregular feature at CryptoZooNews about the replica cryptic species found in models and figurines that represent known extinct and living animals, as well as specific cryptids, which are held by the International Cryptozoology Museum (ICM). The exhibits at the Museum change, but often these replicas are used in dioramas and displays to illustrate reported cryptids, internationally.

I called the umbrella discussion “Replica Cryptia,” as all of these scale-model items are beyond mere toys (although young children, any cryptozoologists-in-training, can be introduced to them thusly).

The body of objects wrote about are the accurate models that are significant as educational teaching tools in cryptozoology, and as cryptozoological fieldwork aids for employment in questioning locals about what is ethnoknown. The ICM displays these for these cryptozoological reasons.

My idea was to explore briefly the foundation cryptid reports, and then match them to the relatively easy-to-obtain, desktop-sized replicas, which may be collected and utilized by those specializing or holding a specific interest in the cryptids under discussion. As we get into more standard cryptids, of course, I talked about the vast cryptic universe of Nessie, Bigfoot, and Yeti replicas and models. But I overviewed first some “prehistoric animals” linked to cryptids that intrigue cryptozoologists.

To kick off the series, I first published on the Mammoths, because some of the most dramatic replicas of Pleistocene megafauna can be found with these examples.

First, the cryptozoology: Sixty years ago, Bernard Heuvelmans collected and published reports, in his On the Track of Unknown Animals, of the modern sightings of supposedly extinct mammoths seen alive today in the boreal forests of Siberia. Thoughts that mammoths had survived probably stemmed, it was explained by scientists, from finds of extremely fresh specimens thawing out of the tundra’s permafrost. But did these mammoths live during contemporary times with modern humans, as discussed by Heuvelmans, Ivan T. Sanderson, and others? Do the sightings of Mammoths place them alongside the Thylacines, as supposedly extinct animals, but still alive, hidden in different wilderness areas of the globe? The idea is a stretch, and I admit that.

Now the paleozoology and the replicas: I have only seen replicas of true Mammoths that seem to represent the long-haired northern species.

The southern mammoth (Mammuthus meridionalis) did not have, per se, long hair, and is said to have resembled a huge Asian elephant with larger tusks.

What the artists, manufacturers, and replica makers have going for them with the woolly mammoth is that frozen carcasses have been found, often in good states of preservation, sometimes with reddish-brown hair on them. Indeed, research has shown that mammoths had red, ginger, and blond hair. The reddishness appears to be incorporated into the model from Papo (France), as shown here. 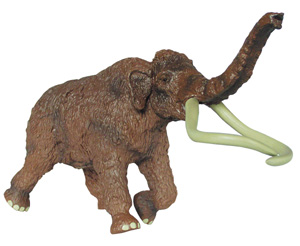 One of the most dynamic Pleistocene replicas around, the Papo Mammoth is 8.5″ long, and shows the color of the reddish hair discovered in recent research on Mammoth hair.

The authentic-looking Schleich and Safari woolly mammoths are rather good in the detail of their features, although, nevertheless, may be a bit too dark in their coloring. I guess we’ll have to find a living mammoth to discover if that’s a true statement! 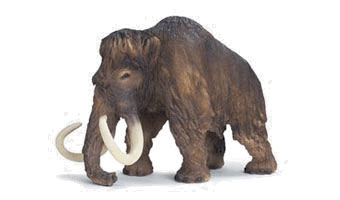 One of my favorites in representation, the Schleich adult Mammoth was created with various hints of the blonde found in new research, and has good tusks and a nice hump. The detail in the replica’s fur is excellent on the 7″ long model.

The Safari Carnegie Woolly Mammoth is amazing in detail and appearance, at 8″ long.

The massive nature of these replicas and the attention to detail make them handsome and attractive replicas to have, no matter what company you pick. The Safari ones are the most massive, the Papo mammoth looks like it’s going to run out of the display, and the Schleich painters have given that nice blond crown on the adult mammoth. Like I said, they all have something going for them.

The Bullyland Mammoth is 8 ” long, and has a good head on its shoulders.

The Wild Safari Mammoth is 5.5″ long, but retains the good features on the larger models.

The Wild Safari Mammoth baby is small, at 3.5″ long. I guess it was one of the island varieties, who all were tiny.

The Schleich baby Mammoth probably would look rather lost without the adult in any kind of display.

Appreciation to The Dinosaur Farm for permission to use their copyrighted photographs of today’s replicas. If you decide to shop there, let them know in their “comments” box that you heard about them from CryptoZooNews, so they understand the impact of cryptozoology – and continue to supply these replicas. (We get no financial benefit from such a referral, btw.)

Please donate to the International Cryptozoology Museum by sending your financial gifts, unwanted or extra replica animals, and/or cryptozoology artifacts to Loren Coleman, Director, 11 Avon St, Portland, ME 041o1 or any fiscal contributions via PayPal to LColeman@maine.rr.com